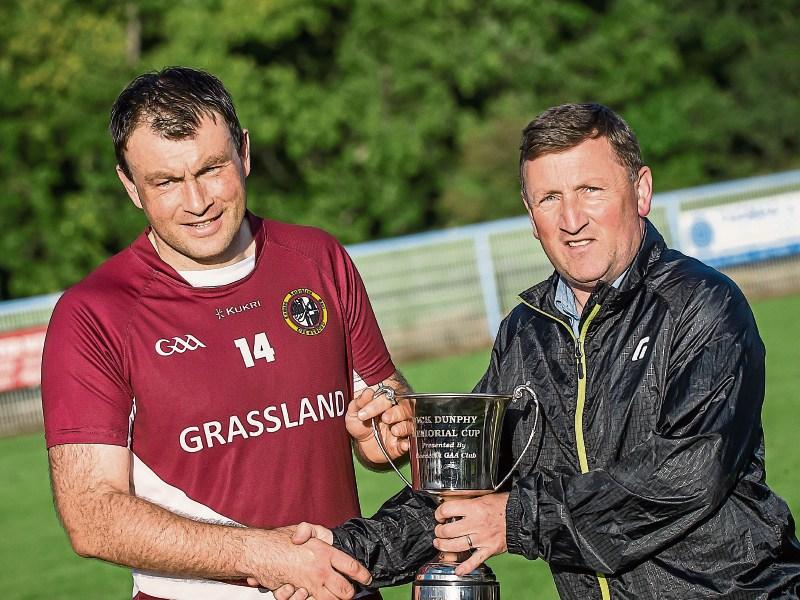 For the first time in their history, Dicksboro GAA club captured the Kilkenny junior ‘B’ hurling championship title.

They did so at sun-drenched Thomastown on Saturday when they edged out gallant Glenmore after a pulsating battle.

The victory marked an extraordinary day for the club. Just over an hour earlier, the ’Boro under-16 hurlers pulled off a huge coup by beating O’Loughlin Gaels in the Roinn A county hurling final.

Manager Brian Fitzpatrick’s junior ‘B’ charges held their nerve in a tight finish to get the verdict, thanks largely to the accuracy of Enda O’Donoghue and the bravery of the entire team, who got off to a shaky start but recovered well.

Playing with the aid of the strong wind, it was Glenmore who started the better. By the 14th minute they were 0-5 to 0-3 ahead, and they were moving well.

Alan Phelan, at wing forward, got into the game for the winners and hit over the equalising point in the 18th minute to make it 0-5 apiece.

It was all Dicksboro from that point until the rest.

Enda O’Donoghue hit a ball in from distance, and the flight deceived the goalie before the sliotar dropped into the net under the crossbar.

The final score of the half was claimed by another contender for man of the match, Edward Moylan, whose catching was a feature of the game.

The winners were rocked in the opening minute of the second half when Eoin Aylward pounced for a goal for Glenmore.

Suddenly, the Southerners, with the strong wind in their backs, were in the ascendancy and it took a great catch, solo run and point from Tom Kenny to halt their march and settle the ’Boro.

However, Glenmore continued to grow in confidence. Their captain, Paddy Murphy was tormentor in chief and by the 52nd minute, there was just a point between the sides, 1-13 to 1-12.

A pointed free by O’Donoghue and a late point by sub, Cian Butler clinched the title for the city side.

Paddy Murphy had the final score of the game, but it was too little, too late to save Glenmore.

A minute’s silence was observed as a mark of respect to the late Jim Buggy of Dicksboro, who died last week. He is brother of former club secretary Ned Buggy.