A victory to be shared by all! 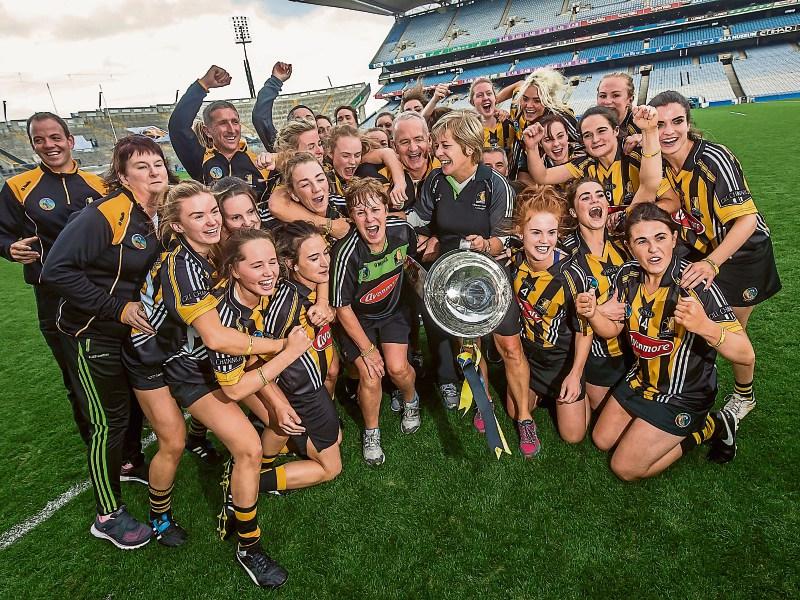 The champions were rightly lauded, but all the brave battlers who wore the colours during the dark days were remembered too.

Kilkenny haven’t won the O’Duffy Cup, the cherished prize for the winners of the All-Ireland senior camogie championship, since 1994. Six teams contested finals since, but all without success.

The link between the ’94 team and today’s champions is team manager, Ann Downey. She didn’t forget the warriors from the past 22 years.

“This victory is reward for the dedicated panel of today, but it is also reward for people who featured on losing teams during that 22-year gap,” said a thrilled Ms Downey after Cork’s bid for a three in-a-row was derailed in the final in Croke Park on Sunday.

“They all made a contribution to Kilkenny camogie,” added the captain from 1994 and 12 times All-Ireland medal winner. “So many great girls have gone before us who haven’t won All-Irelands. You feel for them.

“They are no lesser players for not ending up with a medal. They were unlucky on All-Ireland final day, but I hope they feel a part of this victory. They should!”

Kilkenny camogie was at a crossroads around this time last year when the then senior management team stepped down.

When the Camogie Board turned to Ann Downey to take up the challenge, she did so with a willing heart. She brought Paddy Mullally (Glenmore) and Conor Phelan (Clara) on board the management team.

The trio had produced magic while working together with WIT, and they later invited Liam Egan to join the backroom group as team trainer. The rest, as they say, is history.

“Forget about me, this is all about the girls,” was the reply when we took the manager back to the beginning of the story. “We had a great backroom team. Everyone rowed in when asked.

“The girls bought into what we brought to the table. They worked hard for Liam (Egan) last September/October when no-one knew anything was going on. Paddy brought a wealth of knowledge to the group and then Conor had this calming influence on the squad.

“I am delighted everything worked. Today’s victory was the culmination of all the work and belief in the players shown by everyone.”

The entire group of 31 players - Katie McDonald emigrated to Dubai to work recently - did what was asked of them.

“They were prepared to take correction and advice at all times,” the manager continued. “We had tough times with them, on occasion, and the training was so tough at times I wondered would they all take it. They kept coming back. The hunger was obvious.”

The former St Paul’s and Lisdowney club player made no bold predictions about the future. She urged the girls to enjoy totally what they had achieved.

“I would hope more young girls will seriously consider camogie and the club scene will mushroom,” Ann said.

In reference to the match, she said Kilkenny caught hold of it from the start. Then the girls worked their socks off, hooking, blocking, chasing.

“The scores will look after themselves if you work, work and work,” she insisted. “In games it can come down to how hard are you prepared to hurt. These girls were prepared to go that extra mile.”

She said it was “brilliant” that the intermediate team won their All-Ireland as well, because there could be one giant celebration.

But what about the senior league and championship double?

“It is great to win the League, but it is all about the championship,” insisted the manager after what was the county’s 13th success.