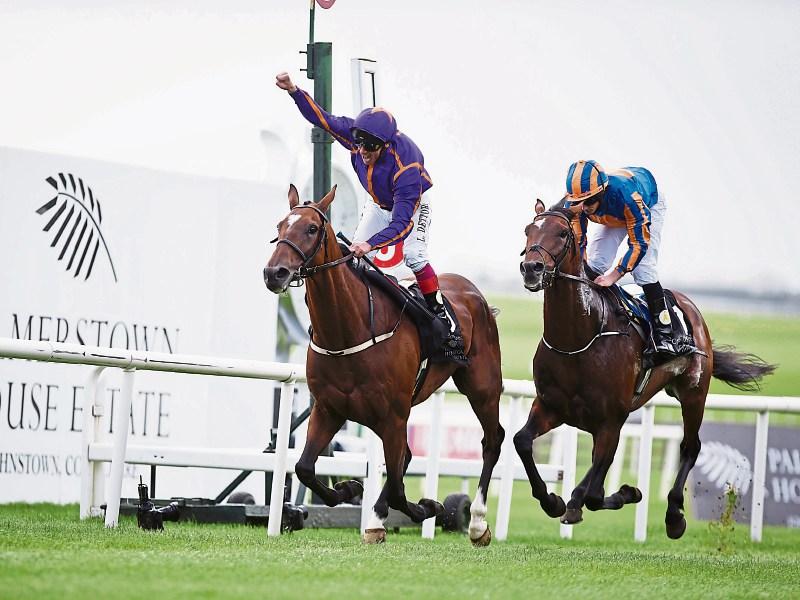 There was a surprise result in the Irish St Leger on the final day of Longines Irish Champions Weekend as Wicklow Brave made all the running to beat 1/7 favourite Order Of St George.

The 11/1 shot was the toast of The Curragh on Sunday, giving Willie Mullins his first Classic success. He was ridden by Frankie Dettori, who had ridden Vintage Tipple for the champion trainer’s late father Paddy to win the Irish Oaks at the same venue in 2003.

It was also a memorable day for both Joseph O’Brien and his brother Donnacha as they both enjoyed their first Group 1 success when 25/1 shot Intricately took the Moyglare Stud Stakes when just holding off their father Aidan’s Hydrangea in another thriller.

As for Aidan O’Brien, he enjoyed a winning turn when 4/5 favourite Churchill comfortably landed the Group 1 Goffs Vincent O’Brien National Stakes in the hands of Ryan Moore.

There was a 22/1 winner of the Bold Lad Sprint Handicap in the shape of New Bidder who won for David Barron and Graham Gibbons while the Northfields Handicap went to Maudlin Magdalen who was a more local success for Donal Kinsella and Maynooth apprentice Sean Davis.

Chris Hayes recorded his second success of the weekend when Orwea, trained by Brian Ellison, landed the Tattersalls Ireland Super Auction Sale Stakes at odds of 14/1.

Shark Hanlon took the training honours as the seven-day Harvest Festival began at Listowel on Sunday.

Danny Mullins partnered 4/7 favourite Hidden Cyclone to success in the Kerrymaid Hurdle while Brian Hayes was in the saddle as 25/1 chance Diamond Quest caused an upset in the mares’ handicap hurdle.

Danny Mullins enjoyed a second winner of his own when he won the €40,000 handicap chase on the John Ryan-trained Kylecrue, who was returned the 100/30 favourite.

Racing began with a win for 6/1 chance Bobabout, trained by Jessica Harrington and ridden by Mark Bolger, in the three-year-old hurdle while 9/2 shot Crown Of Gold won the maiden hurdle for Jim Culloty and Bryan Cooper.

Westerner Lady continued her winning run with success in the mares’ novice chase, the 4/9 favourite winning for Willie Mullins and Ruby Walsh.

The session closed with success for another favourite with even money chance Le Martalin easily taking the bumper for Noel Meade and Nina Carberry.

There was certainly no shortage of talent in the line-up for the QIPCO Irish Champion Stakes on the opening day of Longines Irish Champions Weekend at Leopardstown on Saturday, with the €1.25m event producing a brilliant winner in the shape of Almanzor.

Trained in France by Jean-Claude Rouget and ridden by Belgian ace Christophe Soumillon, the 7/1 chance got the better of Aidan O’Brien’s Found to win by three parts of a length.

Minding finished third for Ballydoyle while Harzand, the 2/1 favourite, was reported to have finished lame back in eighth place.

The Group 2 Clipper Logistics Boomerang Stakes went to Awtaad, trained by Kevin Prendergast and ridden by Chris Hayes and Curragh trainers also captured both Group 3 races on the card.

Ken Condon shared a notable success when taking the Group 3 Juvenile Stakes with 9/1 shot Landfall while Dermot Weld landed the Enterprise Stakes with Zhukova, the 5/2 shot holding off US Army Ranger to win under champion jockey Pat Smullen.

David Wachman, who will retire from training at the end of the season, was among the Longines Irish Champions Weekend winners as his Rain Goddess took the fillies’ maiden at odds of 50/1 in the hands of Declan McDonogh.

Tony Martin enjoyed a 1-2 in the Petingo Handicap with Quick Jack getting up in the final strides under Oisin Orr to beat the McDonogh-ridden Pyromaniac by a neck.

Willie McCreery and Billy Lee are no strangers to big Leopardstown success and they took the Sovereign Path Handicap with the gambled-on Colour Blue who scored at odds of 10/1.

Billy Lee maintained his fine strike-rate with three more winners at Down Royal on Friday evening. Lee has shared plenty of success with Curragh trainer Willie McCreery and the pair landed the 5f maiden with Childhood, backed from 6/1 to 7/2, who edged out 4/5 favourite Hunaina by a neck.

Nicole McKenna, who is based in Dungannon, provided the Limerick rider with his second winner when Modern Tutor won the 7f handicap at odds of 10/1, while Pat Flynn’s 9/2 chance Gusty Rocky completed the treble when landing the Ulster Cesarewitch over the marathon trip of 2m2f.

There was a rare dead-heat to the 13f apprentice handicap with the spoils being shared by Gordon Elliott’s 5/1 shot Tempo Mac, who was ridden by Donagh O’Connor and the Willie Martin-trained 11/2 chance Rolanna, the mount of Killian Leonard.

There was an equally unpredictable outcome to the 7f maiden with success going to 40/1 outsider Trevanna, trained by Kevin Prendergast and Chris Hayes.

He teamed up with Skerries trainer Karl Thornton to comfortably win the 2m maiden hurdle with 4/9 favourite Wakea and then recorded an even easier success when 14/1 shot Sillogue Pio who took the bumper by eight and a half lengths for George Kingston.

Another amateur rider to visit the winners’ enclosure was Lisa O’Neill, who partnered the Liz Doyle-trained Whizzzey Rascal to victory in the 2m3f maiden hurdle at odds of 11/4 joint-favourite.

There was Wexford success when Donald Cashman won the opportunity handicap hurdle with War Of The Pennys who was backed from 20/1 to 9/1 and ran out a narrow winner under Conor Walsh.

Henry de Bromhead and Conor Brassil combined to take the opportunity maiden hurdle with 3/1 chance Simiel while Native Lass, trained by Michael Winters and ridden by Ian McCarthy, took the 2m handicap hurdle at odds of 11/1. Christy Roche and Niall Madden were on the mark with 9/1 chance Finding Touch in the 2m3f handicap hurdle.

Following the cancellation of Wednesday’s meeting at Sligo, Horse Racing Ireland has announced a replacement meeting at The Curragh on Thursday, September 22.

The Fairyhouse fixture due to be held on November 8 will now run on Monday, November 7.

Photo: BRILLIANT BRAVE - Frankie Dettori punches the air as he wins the Irish St Leger on the Willie Mullins-trained Wicklow Brave at the final day of Longines Irish Champions Weekend at The Curragh on Sunday. Photo: Patrick McCann