At last - the famine is over! 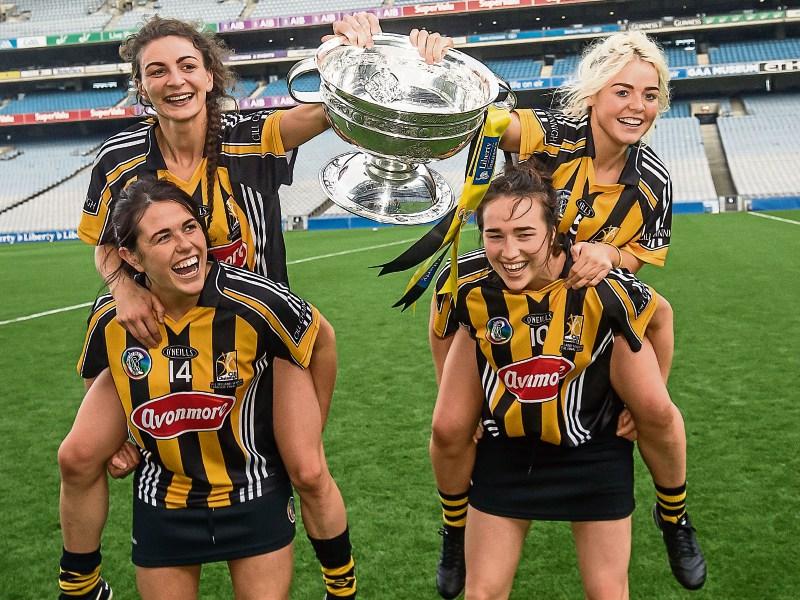 The wait was very long, and very painful too, but the ending of the famine was utterly fulfilling.

And at Croke Park on Sunday, hungry Kilkenny looked elegant and supremely talented as they bridged a 22 year gap since the county’s last success in the senior All-Ireland camogie championship final.

This was camogie of the highest order; full of passion and unity of purpose, commitment in the extreme, but above all it was a commanding display brimming with silken skills.

“It is no harm to have that out of the way now,” insisted thrilled Kilkenny manager, Ann Downey, in reference to the wait since 1994, when she was captain of the team by the way.

“Kilkenny camogie can drive on, because there can be no talk of a gap now,” she added after the Camogie League/Championship double was completed.

A terrifically athletic and strong hurling team had the O’Duffy Cup booked for a return to the Noreside long before the finish.

Cork, who were chasing an All-Ireland three in-a-row, found it hard to contend with the winners busy, busy all action style.

From the moment they conceded the first point to Meighan Farrell in the second minute the losers were under pressure that varied for difficult to the extreme.

They led just once, for 60 seconds, between the 12th and 13th minutes.

Once the Cats regained the lead through match star, Julie Ann Malone in the 14th minute (0-5 to 0-4) they led all the way home.

The game remained alive until the 41st minute when the then thundering Malone linked up with Katie Power to create a goal chance for Shelly Farrell.

The Thomastown corner-forward finished smartly to the net at the Hill 16 end. Kilkenny jumped 1-11 to 0-7 in front.

There was a long way to go to the last whistle, not exactly 22 years but a long way in a final, but the winners saw it out comfortably.

The next score also fell to the winners. It was a point from Katie Power, who took a finely weighted pass from Shelly Farrell, who showed lovely composure after winning possession to wait for the precise advantageous moment before off-loading possession to the scorer.

Cork missed the chance of two scores as they chased with all their might.

They were made pay for those errors when the inventive Michelle Quilty burst an opening for Julie Ann Malone to close their account with a minor in the 45th minute.

In the closing quarter Cork hit back for points from Katriona Mackey (46th minute) and sub Libby Coppinger (57th minute) before they had a goal from a 20 metre free by their best player, Orla Cotter.

The latter arrived in the 62nd minute. By that stage the contest was well over, Cork having been reduced to 14 players after centre-back, Gemma O’Connor, had been dismissed for a second yellow card offence.

“People were talking of the 22 year thing, but we didn’t think of it,” insisted team captain, Michelle Quilty during her acceptance speech.

“The wait was hard and painful on a lot of us, but there was a different dynamic this year which was inspired by Ann (Downey) and the team she had in the background,” she added during a subsequent interview.

The winners grabbed the game by the scruff of the neck from the throw-in.

As the action unfolded, the stars began to shine - Collette Dormer, who was never afraid to attack the ball, and invariably won it; Meighan Farrell, who mopped up possession all over the place; Edwina Keane, who was utterly dependable everywhere she was asked to do duty.

Then Julie Ann Malone and Denise Gaule were the dynamic duo up front, the former as a winner of hard possession, scorer and chance make while the latter was what you want your free taker to be in a final, utterly dependable.

One could throw the garlands here and everywhere.

The work-rate, hooking, blocking and discipline in the tackling by a team playing as a team simply choked the life out of good opposition.

The tone was set from the start when Anna Farrell won possession from the throw-in and charged on a deadly 30 mete solo run towards the Canal End goal. Nothing came of the drive, but notice had been served.

After the first point from Farrell (Meighan) there was a second via a free by Gaule following a foul on Farrell (Shelly).

Cork got off the mark in the fourth minute when Orla Cotter punished a foul by converting a testing free from 55 metres.

The minimum divided the teams when Kilkenny nearly sneaked a goal in the 10th minute. Goalie Emma Kavanagh shot a short puck-out to Edwina Keane in the right full back position.

The ball was transferred to Malone, whose long drive delivered it to within 10 metres of the Cork goal. A gap opened. Michelle Quilty left fly first time. The low shot skidded past the butt of the left upright.

Within a minute Cork were level, thanks to a score from Katriona Mackey after an assist by Ashling Thompson (0-3 each).

They drove on into the lead via a minor from Eimear O’Sullivan, who was hooked first time but regained possession before shooting (0-4 to 0-3).

Within 90 seconds roles were reversed. Kilkenny hit back at the double after Miriam Walsh worked possession to Michelle Quilty, who was fouled. Point for Gaule, and Kilkenny.

On 14 minutes Meighan Farrell and Quilty worked the ball into the zone for Julie Ann Malone to win back the lead, 0-5 to 0-4.

On the Cats drove. Denise Gaule threw over the next point, and the one after that following a foul on Malone (0-7 to 0-4).

Cork were surviving on scraps, because they were being dominated in most quarters. They scrambled a point through Ashling Thompson in the 22nd minute before they won a penalty in the 25th minute after Hannah Looney had been fouled.

Goalie Aoife Murray journeyed up the field to take the penalty. She made good contact with the ball, but Ann Dalton made a block and turned the sliotar over the bar.

The Cats had the final scoring say, a point from Denise Gaule. That took them into an interval lead of 0-8 to 0-6.

The real show was only beginning.

During the opening 11 minutes of the new half Cork were out-scored by 1-3 to 0-1 as the Cats tightened their grip on the match.

This was game winning, and losing time. Kilkenny never loosened their grip.