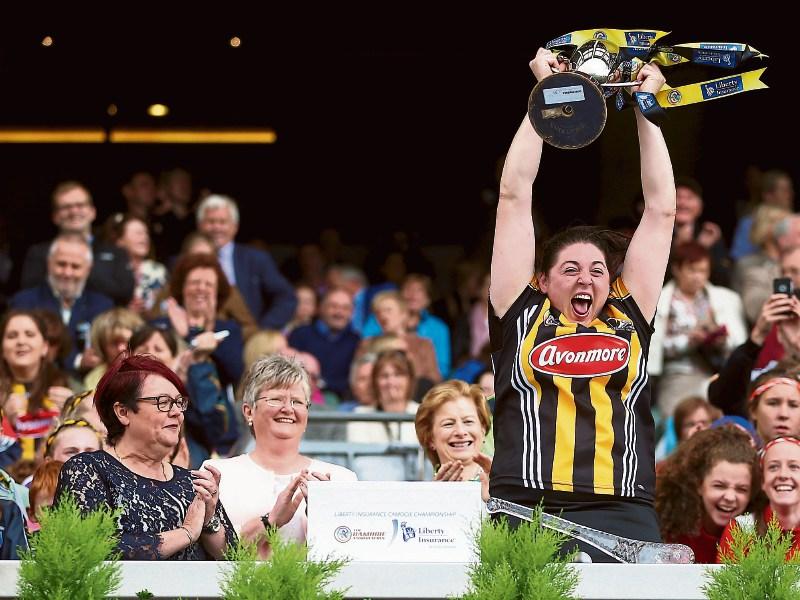 The team “with the heart of a lion” roared to a fabulous victory as Kilkenny got ‘Ladies Day’ at Croke Park off to a thrilling start for the Cats.

Battling Kilkenny turned in a magnificent second half to overpower Cork in an all action intermediate camogie All-Ireland final on Sunday as the girls wrote a glorious opening chapter in the first intermediate/senior double for the county.

“This squad has the heart of a lion,” insisted assistant team manager, Ger Walsh (Thomastown).

“They held Kildare scoreless against a gale during the second half of the semi-final, and they recovered from an average first half here to claim a brilliant victory.

“There is no end to these girls,” the Thomastown official beamed after the Noresiders claimed their second All-Ireland success to go with the one recorded in 2008, also against Cork incidentally.

The first in the 41st minute, palmed into the net, rescued the Cats from arrears when the opposition looked to be gaining the upper-hand.

The score after Fennelly’s intervention was 1-8 to 2-4 in Cork’s favour.

The second arrived in the 44th minute after the opposing ’keeper gifted Fennelly possession.

Determined Cork hit back and claimed the next two points to keep their hopes very much alive.

The winners had to dig deep and defend with all their might even through two minutes of nail-biting additional time before they docked in safety.

“It was some victory,” smiled manager, Mike Wall. “We knew it was in the girls. The spirit among them is simply terrific.

“They never know when they are beaten. They proved their champion quality again today, as they have done throughout the campaign.”

Cork looked the better team, and by some distance, during the opening half, at the end of which they led by 0-7 to 0-3.

Things didn’t look good for the Noresiders, whose lone scorer was corner-forward, Ciara Holden, and two of her strikes were frees.

From the throw-in at the start of the second half Kilkenny were a different team.

Within 50 seconds Sarah Walsh placed Ciara Holden for a point. And in the 32nd minute Fennelly shot a pass to the roving Jenny Clifford, who palmed the ball into the net in a 1-on-1 situation against goalie Amy Lee.

Kilkenny found a new gear after that, and they motored as strongly as the opposition all the way to the finishing line which they reached with the minimum in hand.

As the management team suggested, the winners dug deep into their souls to find the deadly winning effort.

Cork opened backed by the wind and they found their rhythm much faster than the opposition.

They pieced together a good move involving both midfielders, Chloe Sigerson and Jennifer Barry, plus Linda Collins in the third minute for the latter to post a point.

While the winners hit back to earn parity with a pointed free from Ciara Holden following a foul on Angela Kenneally, they rarely posed a great scoring threat afterwards.

Cork edged 0-3 to 0-1 in front by the 11th minute with the addition of two pointed frees from Rachel O’Shea, the first for a foul on the zippy and ever dangerous Linda Collins.

They strengthened their position even more by the 17th minute when the ever involved Collins threw over a brace of points (0-5 to 0-1).

The one spark of real promise from Kilkenny arrived in the 20th minute, and they nearly engineered a goal.

In a quickfire flowing move involving Áine Fahey, Angela Kenneally, Jenny Clifford and Sarah Walsh they worked the latter into position on the left edge of the Cork square at the Canal End.

However, goalie Amy Lee dashed off her line bravely and got in a saving tackle on the would-be goal scorer.

Cork, who were good at taking the ball into the tackle before laying it off, thereby creating space for runners, generally bossed things up to the rest.

Kilkenny’s lone score during the closing eight minutes was a point from a free by Ciara Holden following a foul on Kenneally.

At half-time the score was 0-7 to 0-3 in favour of Cork. The wides tally told a tale of hope, however. Kilkenny had posted five. Cork had one.

Whatever was said in the Kilkenny dressing-room during the break worked wonders.

From the restart the Cats were roaring.

Sarah Walsh placed Ciaran Holden for a point from a bad angle within 50 seconds.

On 32 minutes a probing cross from the wing by Keeva Fennelly was picked up by the forward charging, Jenny Clifford, who showed a keen eye when popping a hand-pass over the advancing goal. Goal!

A shaken Cork missed two possible chances of scores before Kilkenny threw away an opportunity from a free at the other end as a fierce battle for dominance unfolded.

It was advantage Cork big time in the 37th minute when they snatched a great goal. Linda Collins raced through from the right, and after taking a pass from Caroline Sugrue, blasted a powerful shot low into the Kilkenny net.

When Collins added a top class point at the end of a move involving Sugrue and Finola Neville, the losers appeared to be set to motor on.

Within a minute they were stopped in their tracks when Fennelly hand-passed the ball into the net. Now it was advantage Kilkenny.

Lively sub Catherine Walsh made a good play moments later to create the equalising score for Áine Fahey (1-8 to 2-5).

On Kilkenny powered. When the goalie made a hash of an attempted clearance in the 44th minute Fennelly pounced for her second goal, again producing an expert finish (3-5 to 1-8).

Cork refused to surrender. They hit back for a pair of points from Rachel O’Shea and a beauty from Linda Collins.

It was a one point game going into the closing 10 minutes.

When the hurley of Keeva Fennelly was held moments later, Ciara Holden landed a good pressure free from 35 metres to earn Kilkenny a bit of breathing room.

They eventually earned a reward in the shape of a point from sub Keeva McCarthy, who had twice been hooked by defenders before scrambling the ball over the bar.

As the game drifted into the closing seconds, Kilkenny missed a chance of a point. When it was announced over the PA system that two minutes of additional time would be played, the gasp was audible from the Kilkenny contingent.

Sub Lydia Phelan made a great block on Caroline Sugrue in the dying moments, which underlined the sheer grit and determination of the entire unit.

Countless such deeds of defiance made the difference for Kilkenny and left them celebrating at the finish.