Athletic start league on a High' 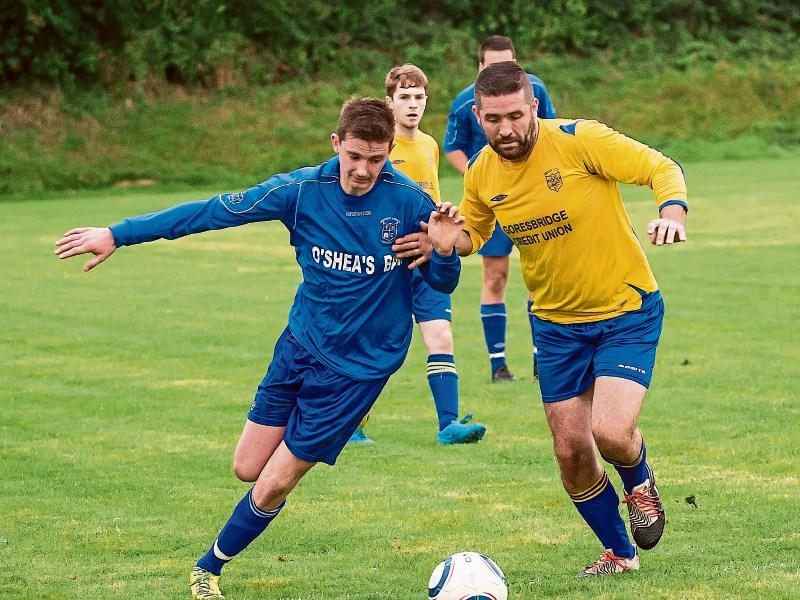 A sparkling six-goal show saw Highview Athletic’s A team start life in Division One on the right foot.

The Graignamanagh side are in the rebuilding process and took another step towards their goal of reaching the Premier Division when they blasted past Bridge United on Sunday.

As far as opening day performances go, Highview’s was top notch. A slick display, full of speed, quick passing and some composed moves, saw them roar their way to all three points.

The same couldn’t be said for Bridge, who endured a second miserable day in the space of a week. Last Sunday they saw their Maher Shield hopes come unstuck at the hands of St John’s. They were better in this outing, but were no match for a visiting side who buzzed into action from the off.

Victory was secured through those six goals, but it was how Highview got them that really impressed. They took just 44 seconds to set out their stall, Dean Broaders splitting the Bridge defence wide open with a clever ball for Shane Ralph to race on to.

Ralph outmuscled Tom Huff - no easy task - in the tussle for possession before skipping round out-rushing ’keeper Niall Kennedy. He also had the composure to dodge a last-ditch tackle before picking his spot in the net.

That goal was a serious setback to Bridge’s aspirations, but things didn’t get any easier in the first quarter.

The Broaders brothers, Dean and Murty, and Garry McDonald formed an impressive trio who worked the ball from left to right, up and down the wings, as they pressed for more openings.

That made for some testing times for Bridge, but they kept calm and got their reward on 18 minutes. Highview tried to work the ball out with short kick-outs throughout the game, but sometimes it didn’t work out.

One such instance saw Shane Murphy rush Shane Kavanagh, forcing him to cough up possession. With help from Eoin Kavanagh the ball was slipped to Sean Murphy, who steadied himself before firing home off the post.

Parity was short-lived - 60 seconds, in fact. A minute after losing their lead Highview found it again.

Just as Bridge had they found a route to goal by rushing the netminder – Kennedy’s kick-out following a back-pass was charged down by David Dunne, who then poked the ball to the net.

The sides went into attack mode after that. Bridge went agonisingly close to getting back on level terms when Sean Murphy stepped on to a loose ball on 33 minutes and unleashed a thunderous drive, but Highview were mightily relieved to see it clatter off the woodwork.

The danger wasn’t over, as Shane Murphy chased after the loose ball, but an excellent tackle from Shane Kielthy saved Highview’s skin.

The Graig men heeded that let-off and secured their lead within six minutes. This time they went from the dead ball, Murty Broaders rolling the ball for Dean Broaders to smash at goal.

The shot took a deflection off a Bridge body, enough to give it some air, but the sheer pace and power took it all the way to the net.

It was a good first half for Highview, but they still had time to plunder a fourth goal before the break.

Picking up Dunne’s pass Dean Broaders pinged a quick ball down the left to set Mitch Maher away. His pace took him into the corner, before he cut the ball back for Shane Ralph to tuck home from close range.

Bridge weren’t about to throw in the towel – they might have had Dean Broaders’ injury-time free hit the net and not the post – but their recovery hopes were boosted when they pulled a goal back before the hour, Sean Murphy tucking away a penalty after Shane Murphy’s shot hit a Highview arm in the box.

That might have sparked a little panic in some sides, but Highview’s composure saw them work the ball around until Bridge ran out of steam.

After that, a quick one-two helped them kill the game off. Dean Broaders grabbed his second of the game in the 74th minute, controlling Murty Broaders’ corner on his chest before firing it home.

Five minutes later they had a sixth goal to celebrate, David Dunne compounding the Bridge misery when he intercepted a back-pass and slotted it past Kennedy.

Goals proved plentiful as all four of the Kilkenny & District League’s junior divisions got up and running.

The Premier campaign continued with more wins for Freebooters A and Evergreen A. The Blues beat Evergreen B 3-2, Henry O’Neill grabbing a brace before Stephen Dawson netted the winner. Across town Daragh Walshe (2), Conor English (2) and Chris Whearty were on target as Evergreen A beat Freebooters B 5-1.

While Highview Athletic hit six on Sunday Clover United were also in goal-hungry form in Division One as they beat Fort Rangers 5-1.

It took Celtic just 60 seconds to get in the goal mood thanks to Sean Grace, with Caimhin Brennan and Mike Hennessy making it 3-0 before the break. More goals from Martin Doyle and Sean Grace wrapped up the convincing win.

Away from local competition Thomastown United sailed into the next round of the Leinster Senior Cup when they easily disposed of Tallaght City.

The Dubliners were sent bowling out of the cup as Sean Brennan - he scored four - helped United romp to an 8-2 win on Saturday. Michael O’Neill, C.J. Browne, Andy Kavanagh and Martin Murray also hit the net as United went to ’Town on City!