Alex is a Medieval Marathon marvel! 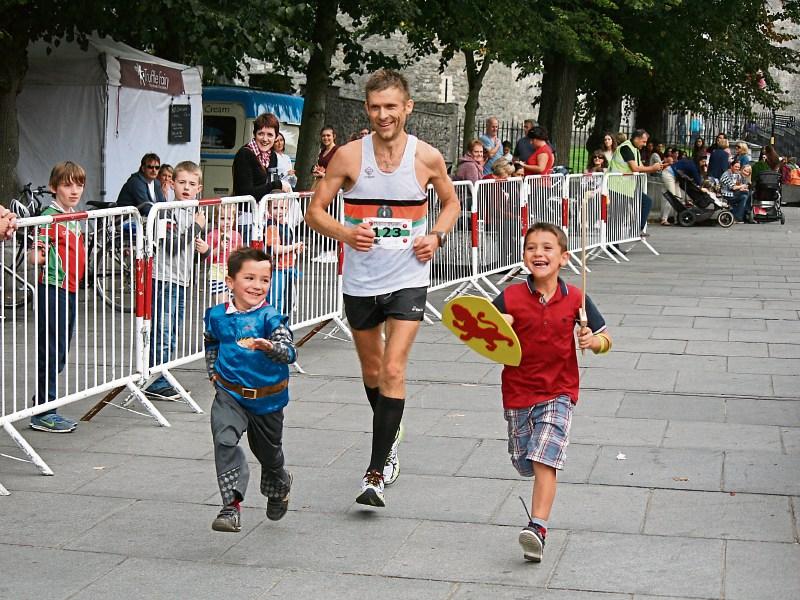 All four races started in the Castle Park and finished on the Parade plaza which contributed to a regular Saturday afternoon carnival atmosphere helped along by the presence of medieval knights demonstrating their armour and weapons.

Cork runner Alex O’Shea had an excellent gun to tape victory in the full marathon, crossing the finish line with the clock showing 2 hours 33 minutes and 31 seconds. Alex had some 17 minutes to spare on second-placed George Brady, who was just 18 seconds ahead of Thomas Shanahan in third place.

There was an excellent standard in the marathon, with the top 20 athletes dipping under the three hour 30 minute mark. Local athlete Anita Barry (St Joseph’s) was the winner of the women’s marathon with 150 athletes completing the full marathon. Another St Joseph’s runner, marathon regular Paul Sheehan, set a new personal best with 3.21 while Kilkenny City Harriers (KCH) women were out in force. Irene Henebry who finished in fourth place, was the first athlete home from the club.

In the half-marathon there was a podium finish for KCH with Sarah Nolan taking third place in the women’s event while Tom McDonald (St Joseph’s) finished just outside the top 10.

In the 10k Pat Purcell (KCH) narrowly missed out on a podium finish, coming home in fourth place in a race won by Ronan Wogan in a time of 33 minutes 21 seconds. Margaret Dillon (Castlecomer AC) had an excellent run in the women’s 10k race, finishing fifth.

The event is planned for a return in 2017, with Saturday, September 16 the proposed date. Thanks went to race director Vincent Guthrie, who developed the concept and, with the help of the Kilkenny Sports and Recreation Partnership, brought it all to fruition.

Elsewhere on the marathon circuit David McPherson (Thomastown AC) finished seventh in the Charleville International Half-Marathon, crossing the line with an excellent time of 70 minutes for the 13.1 mile course. Also in action in Charleville was Gowran’s Paddy O’Keeffe, who clocked a time of 78 minutes to finish in 40th position.

Patrick Bookle was the top St Joseph’s finisher in Kilmore, Co Wexford on Saturday. He finished just ahead of Sally Forristal, who was third in the women’s event.

St Joseph’s AC held the annual Richie Young 5km memorial run/walk at the Pink Rock on Sunday. Almost 100 runners and walkers turned out in memory of the much-loved club member, raising €770 for the designated charity, the Bru Columbanus House, Cork.

All participants predicted their finishing time and then completed the course without wearing a watch. The winners, who finished in the time closest to their predicted time, were Paul Kinsella, Michael Power and Áine Cullen. The winning walkers were Mary McDonald, Ellen Howlett and Bridget O’Gorman. The club thanked all who contributed.

St Senan’s will hold their annual open cross-country at the Sports Complex in Kilmacow on Sunday. There will be races for juvenile boys and girls with even age group categories, as well as under-8 and under-9 events. There will also be adult races in junior, senior and masters categories.

St Joseph’s AC held their inter-schools cross-country on Friday last. More than 130 children flocked to the event, making it an enjoyable evening for all.

Glenmore NS won the Mick Curran Memorial Shield with a total score of 84 points. This was Glenmore’s 10th year in a row to win this championship. There were great races from children from Listerlin, St Canice’s NS Rosbercon, Shanbogh NS and Ballyfacey NS.

The Leinster novice and juvenile even age group championships have been rescheduled for Saturday, October 29 and will be held in Tyrellspass Co Westmeath with an 11.40am start.

The senior, junior and juvenile uneven age group championships will be held on Sunday, November 13, with a venue yet to be announced.

The intermediate and masters championships, along with the juvenile relays, will be held in Dunboyne at Cow Park on January 15.