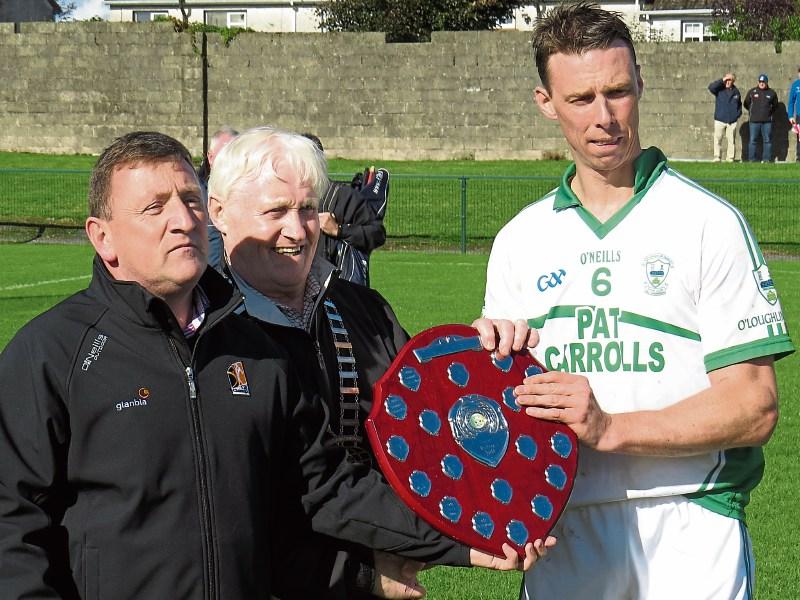 O’Loughlin Gaels rode their luck for a short time at the finish, but they held out for a battling 2-13 to 1-13 win in the senior hurling Shield final.

Twice during the closing minutes O’Loughlin’s were lucky not to conceded a goal as Dicksboro threw everything into a strong late effort to save the match in John Locke Park on Sunday.

In the first instance Ollie Walsh and Robbie Murphy combined to bundle the ball into the net at the town end goal.

After consulting with his umpires, the referee awarded a free out. The score was 2-12 to 1-12 at the time.

Then right on the hour Murphy threatened again, but was unlucky, and in a follow up play Walsh crashed the loose ball against the body of brave goalie, Stephen Murphy.

The winners survived, and registered what was their second win in the Shield, to go with their initial success in 2009.

O’Loughlin’s, with Mark Kelly in thundering form at centre-forward, opened as if they were going to blow away the opposition.

Kelly shots points one, two, three and four as he led the St John’s Park outfit into a 0-4 to 0-1 lead after a mere seven minutes when playing against the breeze.

Ollie Walsh settled the ’Boro with their second point in the tenth minute. They were unlucky not to snatch a goal 90 seconds later when goalie Murphy brought off a top notch save from an Andrew Gaffney pile-driver.

The chasers eventually caught up in the 21st minute, with the Gaffney brothers, Andrew and Martin, claiming the points (0-5 each).

The ’Boro edged into a two point lead later, but then a slice of luck for O’Loughlin’s helped them turn the tables.

Following a foul on Eoghan Grant, Mark Bergin, who wasn’t enjoying much luck on frees, made less than full contact with the ball with a free on the ‘50’. The ball sailed a couple of feet above head height, but it got by two defenders and ended in the Dicksboro net.

Within a minute the losers hit back, and Kevin Kenny was set up for a goal by Martin Gaffney.

However, in a frantic run to the break, the losers saw Robbie Murphy put a ball wide from in front of goal and ’keeper Murphy brought off another top class stop at the end of a flowing move involving Ollie Walsh, Martin Gaffney and Murphy.

When they might have been better off, Dicksboro, who were without county star, Cillian Buckley, reached half-time 1-11 to 1-6 in front.

The winners burst into action in the new half. An early foul on the soon to be very involved Martin Comerford earned Mark Bergin a point.

Then goalie Stephen Murphy converted a huge, 80 metre free as the opposition fell away, in an offensive sense.

Mark Kelly, with an assist by Comerford, threw over the Gaels third unanswered score of the half in the 40th minute (1-11 to 1-9).

Mark Bergin punished another foul on Comerford before they jumped ahead in the 46th minute.

They did so via a goal by Mark Bergin, after a delightful aimed and angled ball, left to right, out of defence by Shane Mahoney set up the chance (2-10 to 1-11).

On the good times rolled for the winners. David Burke pointed. So too did Mark Bergin, with another assist from the creative Comerford.

By the time Dicksboro mustered a score, they had conceded 1-6 without reply.

Eventually, in the 55th minute, Dicksboro claimed their 12th point through Andrew Gaffney.

They were to register just one more score, an Andrew Gaffney point, before the finish. In between they were unlucky not to score at least one goal, but O’Loughlin’s held out.

Goalie Stephen Murphy did very well for the winners, as did Mark Kelly early on; Martin Comerford in the second half.

Mark Bergin walked off the field with 2-6 to his credit, but rarely will he register as much on a day his free taking touch deserted him.