Shamrocks bounce back from setback to claim League title 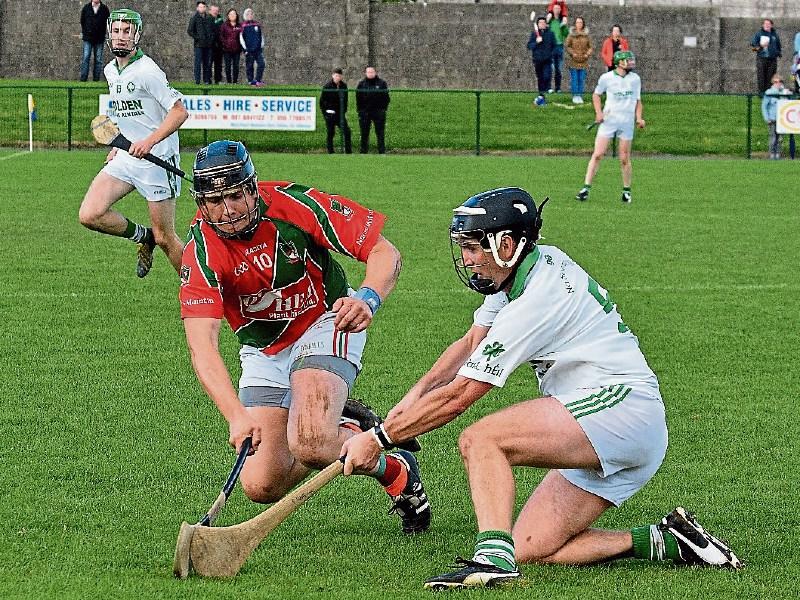 Ballyhale Shamrocks thought they had blown their chance, but as tradition would dictate, they produce a winning performance from virtually nothing.

Four minutes from the end of normal time T.J. Reid posted his side’s last point in regulation time to leave the Ballyhale boys a handy 1-17 to 0-13 in front.

Except no one told gusty St Martin’s, who stormed back not only to force extra-time, but to grab the initiative.

“We thought it was gone on us then,” admitted Shamrocks manager, Andy Moloney afterwards.

“We didn’t think we would have it in the legs to pick it up again and drive on. But we did. The younger players really stepped up to the plate and took their chance.”

A posse of young players were given their head, and in true Shamrocks fashion, they showed class and nerve to storm through for a victory that sets them up nicely for the championship.

“You never pass up the chance to win a county title, and the players obviously weren’t going to let this one go,” Moloney continued.

“It was a nice way to finish out the league campaign, but the real business of the season is only beginning.”

So let the finish be the beginning for the telling of a long and involved story.

In the second period of extra time, from the 70th to the 80th minutes, Shamrocks plundered five points without replay to win by five.

At the break in extra time the score was 1-19 each. Then that most elegant of finishers, T.J. Reid won back the lead for Shamrocks with a point following an assist by team captain, Mark Aylward.

With the sun beaming down on John Lockes Park on Sunday, the winners thundered on. A foul on the now very involved team skipper earned Reid another minor.

Aylward then received from David Hoyne before hitting the target from 55 metres. The next ball was supplied by Brian Cody, and this time the skipper drew a great save from goalie Colin McGrath, who turned a bullet like shot over the bar.

The closing Shamrocks points were posted by Reid and Ronan Corcoran as Martin’s were dispatched with a little bit more ease on the scoreboard than was the case in reality.

Martin’s opened against the fresh breeze, and after conceding early to Reid (2) they hit back at the double through the very lively Thomas Breen and the evergreen John Maher (0-2 each).

On Martin’s drove. Points were landed by Shane Kinsella, John Mulhall and John Maher (2) to shoot them 0-6 to 0-2 clear by the end of the quarter.

The Shamrocks fought back to earn equality at 0-6 each in the 21st minute when T.J. popped over a deadly point from a bad angle on the right at the country end when placed by Ronan Corcoran.

Martin’s reply was to piece the best move of the game together, and finish it with a point. Donal Shore took the honours after a wonderful high catch by Breen started the drive that was continued by Paul and John Maher.

The leveller came from the stick of T.J. before efforts from Brian Cody and Patrick Mullen left Shamrocks 0-9 to 0-7 clear on 25 minutes.

The next score was a Shamrocks goal. Ronan Corcoran put his name on it after being placed brilliantly in space and near the target by Brian Cody.

In a jiffy Shamrocks tossed over two minors, which helped them into an interval lead of 1-11 to 0-8.

The next six scores were equally divided before T.J. Reid put two together to up the winners advantage to 1-16 to 0-11 in the 43rd minute.

St Martin’s looked to be fading, but an absolutely great point from a sideline cut from 40 metres by Ollie Walsh, plus a converted free by John Maher, lifted their spirits.

T.J. Reid suggested they would be kept at distance when he pointed to leave it 1-17 to 0-13 five minutes from the end.

The Martin’s revival was sparked by John Mulhall, who crossed from the right for Jason Shore to bat the ball into the net at the far post. Bang, bang, bang....John Maher (3) and Thomas Brennan landed quick fire points to force the match into extra time.

On the tired troops stormed, with the pace of the exchanges increasing if anything.

Nothing was decided by the time of the next rest, when it was 1-19 each.

Shamrocks drove it on from there, with T.J. Reid at the head of their best work, but with Mark Aylward, Brian Cody, Bob Aylward, Joey Holden and Darren Mullen also very prominent.

As ever, St Martin’s go to man was John Maher, who was a real class act, while Ollie Walsh, Bryan Byrne, Thomas Breen and Shane Cadigan left nothing in the tank either.