Phats the way to win the Derby says Daddy! 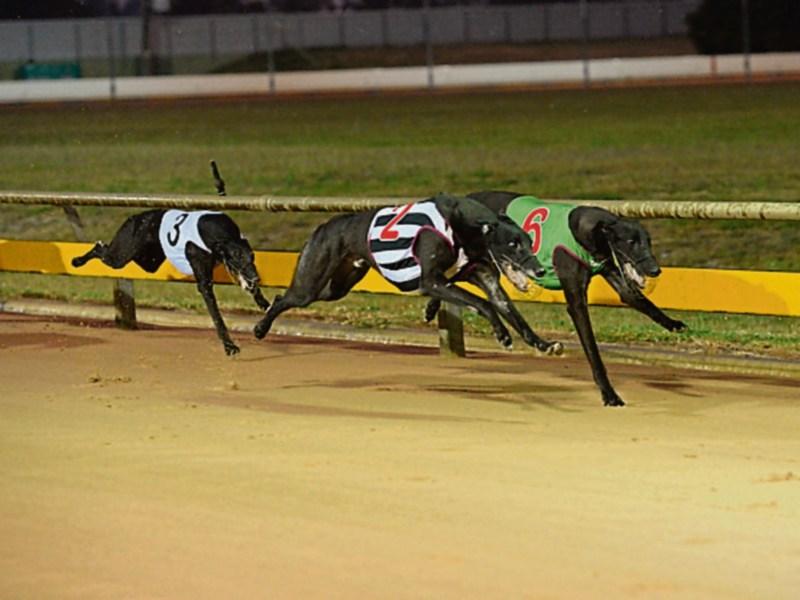 There was a bumper crowd at Kilkenny greyhound track on Friday night for the final of the Langton House Hotel and TSC Derby.

After the trap draw, Me Phat Daddy looked to have the prime position with his rails berth.

Black Tom was the first to show and led for the opening few strides. He just could not get across to the rails as Me Phat Daddy was on his quarters.

Me Phat Daddy took it up around the first bend and the roaring soon started.

The son of Scolari Me Daddy and Lemon Rita kicked three lengths clear into the second bend before pouring it on to lead by five lengths turning for home.

Karlow Crean came through for second spot but the race belonged to Me Phat Daddy as he claimed the big prize by five and a half lengths in 28.85.

There were good wins on the card for Lisdaleen Bandit and Jaytee Patriot over the extended trip.

The night got underway with a sprint. Here Bellotto was sent off as the hot favourite.

The jolly came away well in company with Condor Lily and the pair went to the bend together. Bellotto asserted into the bend and the race was soon his.

Bellotto, trained by Ann Guilfoyle, raced away to defeat Condor Lily by five lengths in 16.64.

The novice 725 was level early and into the first bend. The slow starting Master Jim ran a very good second bend to move from the back of the field to the front in one swift jump.

Master Jim went on to lead Aughacasla Moira by two lengths at the third turn. From there he just kept going further and further clear as he powered down the back stretch.

Sunoak Athena ran on to claim second spot but Master Jim was home by five lengths in 41.51.

Bricken Brett was the trap to line winner of the third race.

The winner popped out of trap 2 and led the field around the opening two bends. Flat Cap was the first to challenge as he moved within a length at the third bend but couldn’t get by.

Hes A Tornado came home with a rattle but Bricken Brett held him off too as she scored for the first time in seven starts by a short head in 29.64.

The bookies put Droopys Ford in as hot favourite for the second staying contest of the night and that looked a fair assessment as Droopys Ford set strong early fractions.

The hotpot raced on and was six lengths to the good turning down the back stretch for the second time. The lead was up to eight lengths by the second last, but Droopys Ford was running on empty.

Lisdaleen Bandit on the other hand was full of running.

Trained by David Flanagan, Lisdaleen Bandit easily picked off Droopys Ford on the run home to win by four and a half lengths in 41.12.

There was little in the fifth race going to the bend bar Marwood Jackal, who struggled to go the early pace.

However, the challenger stumbled as he was about to make his move. This left Mikeys Picture clear to come home in front of Master Gorryisle in 29.79.

Jaytee Patriot proved a class apart in the open 725. The winner suffered early traffic problems, but got himself in a good position up the home straight, tucked in behind leader Triangle Bear.

Triangle Bear was two lengths in front at the fourth bend, but Jaytee Patriot was soon in front.

The Paul Hennessy trained Jaytee Patriot breezed by Triangle Bear for a runaway 11 and a half length victory in a time of 40.87.

The winner went up well from trap 1 and was a length clear of Graigues Penny at the second bend. Hay Nellie remained that length clear into the third as Condor Merlin joined in pursuit.

The challengers lined up in behind but Hay Nellie was not for passing and held on to win by two lengths from Graigues Penny in 29.60.

The finale was level early on before Chief Lad kicked on to take the lead. Chief Lad went on and was two lengths in front of Ballybough Bergo at the second bend.

The pair were level into the third bend and when it came to a finishing kick Ballybough Bergo was that bit stronger.

The Murt Leahy trained Ballybough Bergo pulled away to win by three and a half lengths in 29.30. Lemon Pete was second.