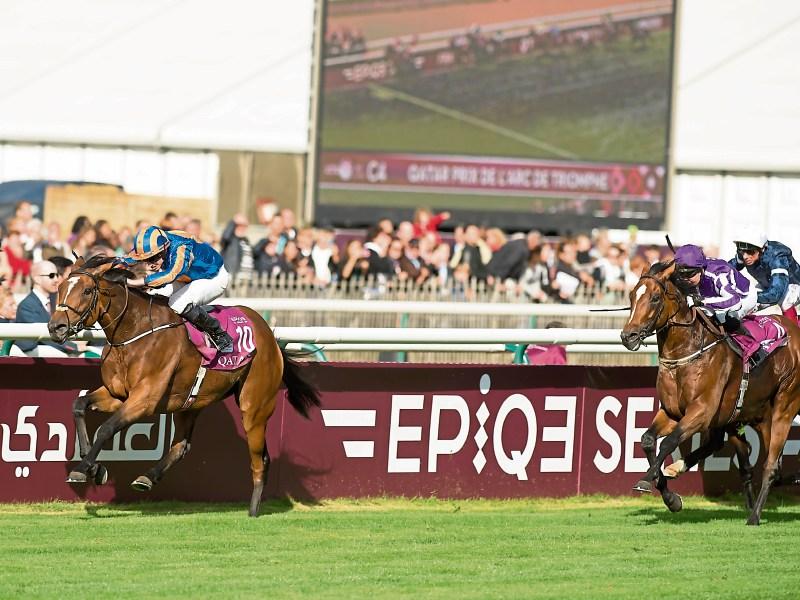 Found enjoyed her finest hour as she led home an Aidan O’Brien-trained one-two-three in the Qatar Prix de l’Arc de Triomphe at Chantilly on Sunday.

Ridden by Ryan Moore, she took her tally of Group 1 victories to three when claiming Europe’s richest race at odds of 6/1.

For O'Brien it was a remarkable achievement, with Found coming home ahead of Highland Reel and Order Of St George. The result also gave him his 18th Group/Grade 1 winner of the year.

“It’s unbelievable,” he said. “I can’t describe it. You couldn't even dream of that - how could you say anything is higher than this?

“It is the most difficult race,” the trainer added. “For that to happen it is incredible. Ryan gave her a brilliant ride.”

It was O’Brien’s second win in the race coming nine years after Dylan Thomas won at Longchamp. O’Brien had enjoyed big race success earlier in the week when Alice Springs registered her third Group 1 success of the season in the Kingdom Of Bahrain Sun Chariot Stakes at Newmarket. She too was ridden by Ryan Moore.

Tattersalls Irish 1,000 Guineas heroine Jet Setting was in a class of her own as she returned to winning ways in the Group 3 Concorde Stakes at Tipperary on Sunday. Sent off the 7/4 favourite, Adrian Keatley’s stable star raced to a convincing six and a half-length victory under Shane Foley and might step back up in grade for the Queen Elizabeth II Stakes at Ascot later this month.

Trainer Martin Hassett and Wayne Lordan were on the mark with 13/2 chance Three Jacks in the 9f maiden while over the extended seven furlongs Downforce, the 2/1 favourite, won TheTote.com Handicap for Willie McCreery and Billy Lee.

The remainder of the card was dominated by Willie Mullins and Ruby Walsh. They landed the Grade 2 Istabraq Hurdle with 2/5 favourite Ivan Grozny and followed up with a comfortable success for evens favourite Penhill in the Grade 3 Joe Mac Novice Hurdle. Their treble was completed when Westerner Lady, a 2/1 chance, ran out a thoroughly impressive winner of the Grade 3 Like A Butterfly Novice Chase.

Champion trainer Willie Mullins and champion jockey Ruby Walsh were the big winners at Gowran Park on Saturday where 5/2 chance Ballycasey ran out a clear winner of the PWC Champion Chase. The nine-year-old came home 11 lengths to the good over Road To Riches and the pair might well clash again in Down Royal early next month.

Ridestan landed the Grade 3 Kilbegnet Novice Chase for Henry de Bromhead and David Mullins when battling back to deny Neverushacon by a nose at odds of 9/2. The Kilkenny rider had earlier won the 2m4f maiden hurdle on 6/1 chance Blood Crazed Tiger who looks a hugely promising sort for Gordon Elliott.

Two 7lbs claiming riders also got in on the winning act. Ricky Doyle teamed up with Joseph O’Brien to win the three-year-old hurdle on 5/1 chance Lord Justice while Brien Kane won the handicap chase on the Gavin Cromwell-trained As De Pique who scored at odds of 8/1.

Airlie Beach made it five wins from as many starts when comfortably winning the Listed Pat Walsh Memorial EBF Mares Hurdle at Gowran Park on Friday.

Sent off a 4/9 favourite for Willie Mullins, she won like every odds-on shot should and had little difficulty in accounting for her stable companion Daisy’s Gift by six lengths.

Danny Mullins landed his sixth winner in three days when the Liam Burke-trained Coolbane West took the penultimate race on the card while the concluding listed bumper went the way of 4/1 shot Snow Leopardess.

A day after his treble over fences at Sligo, Danny Mullins continued his fine run of form with two more winners at Clonmel on Thursday.

He teamed up with his father Tony to win the 2m maiden hurdle with 14/1 chance Mr Nicolls and made it two when taking the handicap chase on 4/1 shot Dark Outsider, trained in Bandon by James Dullea.

There was a controversial outcome to the Kilmore Maiden Hurdle which saw the Davy Russell-ridden Little Folke disqualified after just pipping Solar Heat, trained by Dot Love and ridden by Rachael Blackmore.

Russell was suspended for three days for improper riding but he was subsequently handed a further 14 day ban for conduct the stewards deemed unacceptable.