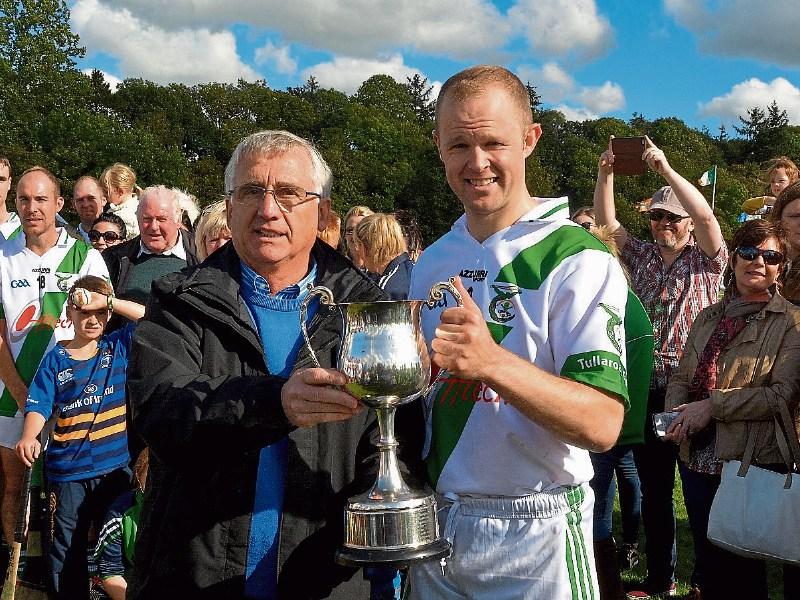 The biggest winners of the senior championship in the county - 20 titles - added another fine chapter to the history of the club when they beat Carrickshock in the league final at sun kissed Thomastown on Sunday.

“It is not easy to win any title in Kilkenny, so when you get the chance to win one you have to go for it,” insisted pleased Tullaroan manager, Jimmy Coogan, who reminded that the club lost the decider to Bennettsbridge last season.

“The real test is next week and the championship, but it is nice to sign off in the league with a good win,” the manager added.

Tullaroan drew near neighbours, St Lachtain’s (Freshford) in the championship quarter-finals while Carrickshock play Lisdowney. Both games will be played this weekend.

This final was turned on its head between the 41st and 46th minute when Tullaroan shot a hat trick of goals.

Carrickshock had just taken the lead after Damien Walsh sent the green flag flying after controlling a left wing cross from Brian Donovan, before shooting to the net from 14 metres at the country end, 2-10 to 1-14.

Within 30 seconds the ball was in the net at the other end. From a seemingly harmless situation, Peter Walsh stole a metre on his marker and got to the ball first to touch home a cross from the edge of the square (3-10 to 1-14).

All of a sudden Tullaroan could do no wrong. In their next raid Shane Walsh put his name on a goal after ’keeper, Jamie Power, had body blocked an initial shot.

Believe it or not, those were the opened two scores of the half for the winners. But once they found their range, they couldn’t stop scoring.

Next up Tommy Walsh threw over a pair of points from distance, and in another raid in the 46th minute he rifled a low shot from the left into the far corner of the net.

Things went from bad to worse for Carrickshock when former great, Richie Power, picked up a bad hand injury in the 50th minute.

Power, who had heavy strapping on his left knee, was chasing game time as he tried to get his battered and bruised body into shape to do his bit for the club in the championship.

As people know, he has been advised to give up the inter-county game because of a series of injuries to his left knee. Surgery cannot correct the damage after years of wear and tear, but Power was determined to battle on.

He went on as a sub in the 40th minute, but when contesting a high ball he took a bad blow to the hand, after which the tackler was booked.

Power didn’t even wait for assistance. He knew he was in trouble. He undid his helmet, made his point to the referee about the tackle, and walked off the field.

Later club officials suggested a finger had been broken, and there was also damage to his thumb.

The losers played without another former star, Michael Rice, who is nursing an arm injury.

They did well early on when breeze assisted, and the scores were level six times during the opening 20 minutes.

The losers hit the front in the 19th minute when fine free taker, Kevin Farrell, punished a foul on Mick Rohan. John Power (county player) added to the gains with a great point under pressure to leave Carrickshock 0-9 to 0-7 ahead.

Tullaroan simply motored on, and two smashing goals were among their gains before the rest.

The first was rifled home by Ken Coogan after a flowing move involving Shane and Peter Walsh (1-8 to 0-9).

The second was even better.

It came at the end of a sizzling 35 metre burst through the heart of the ’Shock defence by Padraig Walsh, at the end of which he nearly tore the net from its rigging with a ferocious strike.

The losers pushed the pace after the turn. Minors from Kevin Farrell (free) and David Franks edged them closer as the opposition spurned four chance.

When Carrickshock got in front through Damien Walsh’s goal (1-14 t0 2-10), Tullaroan looked in a bit of trouble.

Nah! They simply found a new gear, a way out of trouble and a hatful of goals that left them singing in the warm sunshine.