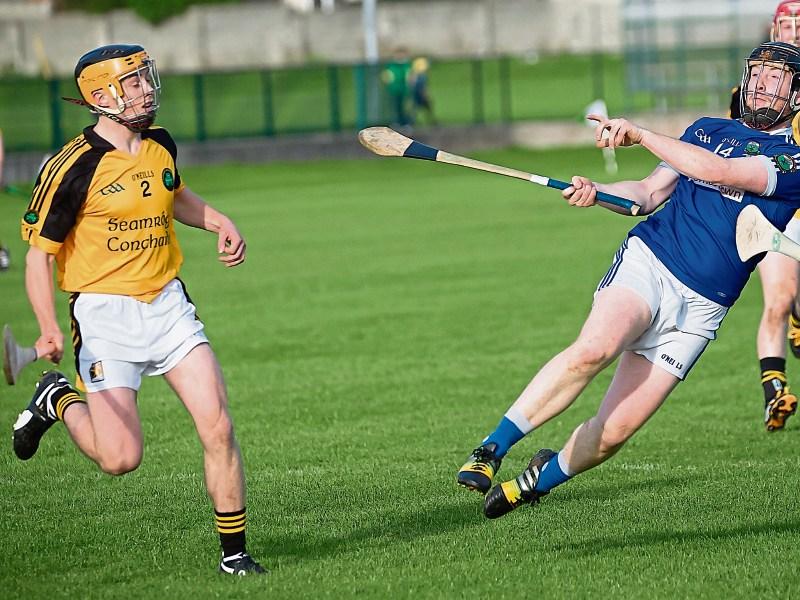 Thomas O'Hanrahan (Thomastown) gets his shot away

Superior physical strength was a big factor in Thomastown’s deserved victory over Conahy Shamrocks in the first round of the intermediate hurling championship.

In this  game  played in St John’s Park on Sunday, the outcome was predictable from a long way out (Thomastown 0-19, Conahy 011).

For 30 minutes Conahy matched their opponents with commendable effort and would have been happy to go in at the break trailing by a single point.

It was a very different story, though, in the second half when  the Southerners took  a firm grip on the game.

This was particularly so during  the opening 10  minutes when they hit five unanswered points.

A fourth minute Shane Brennan point from a free for Conahy opened the scoring, but within two minutes Robbie Donnelly pointed a 65 to level the game.

Brennan and Donnelly were to emerge as the main scorers for their respective teams, both scoring 10  points.

Conahy were far too dependent on Brennan for their scores, while Donnelly had plenty of skilful colleagues who came up trumps with points at key stages.

Right from the throw-in it was clear that the physical advantage enjoyed by Thomastown would be a telling factor in  deciding the outcome.

Conahy more than met the Thomastown challenge in the opening half, crowding their opponents at every opportunity or forcing frees which Shane Brennan converted.

A superb 60  metre point from Craig Butler in the 25th minute was the pick of the first half scores.

It gave the winners a lead they would not surrender for the remainder of the game.

While the Conahy defence was coping well against a strong and ever moving Thomastown attack, Richard O’Hara was making a big impression playing a roving role around the middle third of the field.

He scored two excellent points, although one of those scores came from a misplaced Conahy clearance.

Two points from Shane Brennan (Conahy) brought the margin back to the minimum  on the call of half-time.

It might have been more had Thomastown taken a few well worked  chances in the closing stages of the half.

This first round tie was effectively decided during  the opening 10  minutes of the second half.

An early Jonjo Farrell point was followed by four on the trot from Robbie Donnelly, three of which came from frees. The 'Town were flying, and they maintained a good momentum to the finish.

A six point gap had now opened up, and with the Conahy attack struggling to make any impression against a solid and fast tackling Thomastown rearguard, it was hard to see a way back of the Northerners.

Their cause was not helped by delivering high balls into the heart of their opponents defence.

It was a tactic that would not work for the lighter Conahy attack against much stronger opponents.

On the few occasions when Conahy played a swift low ball into their attack, scores resulted.

Thomastown’s second half dominance forced Conahy into the concession of frees, and with a striker of Robbie Donnelly’s calibre on the pitch points were landed from all angles and distances.

He gave a display of free taking!

The Southerners are a match for anyone in the intermediate grade and have a superb spine in their defence in James Burke and Barry Whelan.

The evergreen Dessie Walsh continues to be a hugely influential player for Thomastown around the middle of the field, while in attack Robbie Donnelly, Jonjo Farrell (although he was pretty well policed by Kieran Mooney) and Thomas O’Hanrahan were best in a unit  that grew in stature and belief as the game progressed.

Conahy would have been very happy with their first half performance, but it was a different story after the break.

Goalie Paraic Delaney never put a foot wrong, while the full-back line of Simon Callinan, Kieran Mooney and Philly Cass were excellent all through.