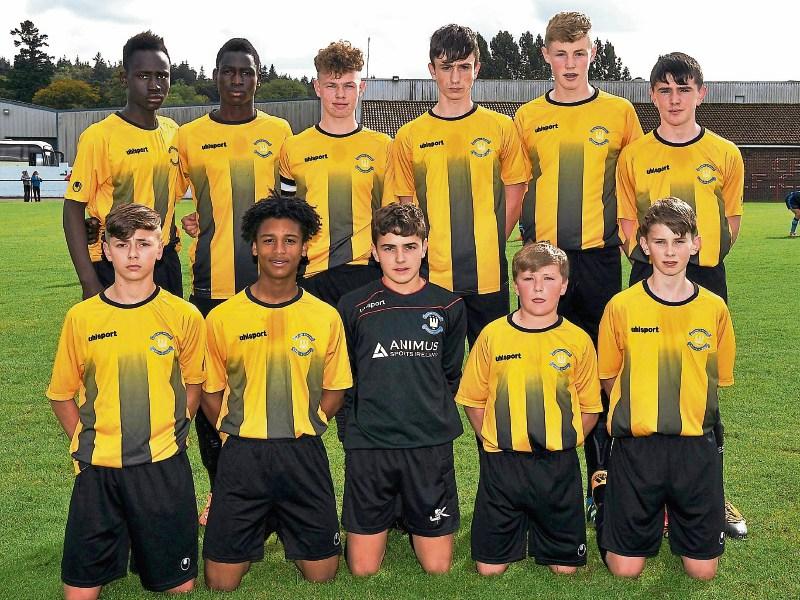 The Kilkenny & District League under-15 team who beat the DDSL 2-0. Photo: Michael Brophy

Patience and power were to the fore as the Kilkenny & District League’s under-15s made sure they started their inter-league campaign on the right foot.

Keen to build on their success at the Kennedy Cup last season, Darren Doyle’s side sent out a warning of their intent to the rest of Leinster as they beat the DDSL 2-0 in Castlecomer.

Firstly, the patience in their game made sure the Cats didn’t panic as they waited for chances to come. They were strong in defence, solid in the centre and showed promising glimpses in attack. Then, the power of their game came when they turned the screw in the second half to blast their way to all three points.

They had a real battle on their hands in the early stages as the DDSL – they fielded a young side as preparation for the Kennedy Cup – took hold of midfield and pushed Kilkenny back on their heels.

The visitors had some good chances to take the lead in the opening stages. Gavin O’Brien curled a clever second minute free around the wall, but couldn’t beat Adam Byrne, while defender Padraic Moylan was forced to head over his own bar after Sinclair Armstrong fizzed in a tricky cross on seven minutes.

Kilkenny found life tough in the opening minutes, but once they gained a foothold they began to create some opportunities. Spurred on by midfielder Brian McDonald, who pulled all the strings in the centre, they went within a whisker of taking the lead after just nine minutes. Quick play from Jamie O’Keeffe and Jackson Oyo saw Fred Odera released into space on the right. He turned the ball back across the target, forcing goalkeeper Morgan Rice to finger-tip it over the bar.

The danger wasn’t over as, from the resulting corner, the DDSL couldn’t clear their lines. The ball eventually fell to O’Keeffe, but Rice comfortably dealt with the midfielder’s header.

The sides continued to entertain as they searched for a way through, but as the half wore on it was the DDSL who looked like being first to grab a goal. Gavin O’Brien clattered a 17th minute free into the Kilkenny wall, while it took a vital challenge from Tristan Roche to prevent Sinclair Armstrong from opening the scoring just a few minutes later.

The stalemate continued as the half wore on – Cian Kavanagh thought he had broken the deadlock midway through but his header was ruled out for offside – but as half-time neared Kilkenny began to up the ante.

Playing a high line, the Cats put the squeeze on their opponents. With Oyo and Jackson leading the attack they pegged the DDSL back on the edge of their own box. A back-pass to Rice fell short, giving Jamie Maher a glimmer of hope as he raced after possession, but Rice raced from his line to kick the danger clear.

The Cats went even closer to opening the scoring in spectacular fashion right on the stroke of half-time. Watching as Padraic Moylan’s long free-kick dropped his way Jamie O’Keeffe controlled the high ball and, on the spin, unleashed a dipping half-volley.

The ball swerved viciously as it flew goalwards, but Rice managed to get his hands behind the shot before stopping it near his right hand post.

Keen to build on that chance, Kilkenny came into the game even more in the second half. They began to press and press their opponents through different methods – at times they went long, at others they strung the passes together in quick fashion.

Just when it was looking like the stalemate would prevail, Kilkenny’s hard work finally paid off with 14 minutes to go. Piling on the pressure, they pegged the DDSL back deep in their own half and refused to let them clear their lines from a throw-in.

The pressure paid off. Mati Zych robbed possession, then worked it inside to Pierce Blanchfield. Spotting Fred Odera making a run from the right Blanchfield laid the ball off to his team-mate, who stepped into the box to curl an unstoppable shot across goal and beyond the reach of sub ’keeper Kian Moore.

That goal stung the DDSL into life. Now it was their turn to pile forward and go on the attack. They spurned a brilliant chance to level matters when sub Nathan Anyanwu delivered an excellent cross that picked out the unmarked Ben O’Brien, but he couldn’t keep his 65th minute header from flying over the bar.

Anyanwu had a great chance to bag a goal of his own just a few minutes later. Dashing through the centre he picked up Ben McCormack’s volleyed pass but while he kept his shot on target he couldn’t force it past Adam Byrne.

Kilkenny survived the pressure, then made sure of the points in the dying seconds of normal time. Odera and Blanchfield did their best to relieve the DDSL pressure, attacking the ball as the Dubliners tried to pour forward. The tactic worked; the ball spilled loose under the pressure and fell to Jackson Oyo, who took one look and hammered an unstoppable shot into the bottom right corner.

The damage was done – Kilkenny had the opening day win they craved.