Hurrah for the handballers: they aced All-Irelands tests 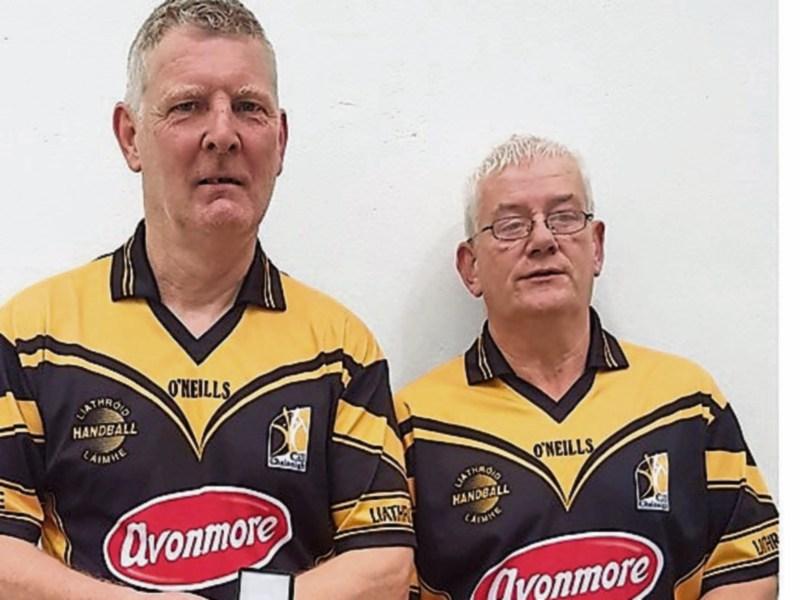 In what was a busy weekend for Kilkenny handballers, success was enjoyed by  eight locals who won  four All-Ireland doubles titles.

On the juvenile front there was plenty of action in All -Ireland semi-finals at Kilfane and Talbot’s Inch on Sunday.

On Saturday, handballers from Clogh and Kilfane travelled to Roscommon and Abbeylara, Longford to take on Connaught and Ulster  in four different All-Ireland grades.

First up at St Coman’s, Roscommon were Clogh duo, Ned Lawlor and Billy Love, who played Sligo in the Emerald Masters ’B’ doubles.

From the start the North Kilkenny pair were in control. With the aid of some excellent serving, they were deserving 21-2, 21-17 winners.

In the second set, Ned and Billy were led 14-2, but they recovered to tie at 15 all before closing out a famous victory.

In the other match at the mid-west venue, sadly it was for Daniel and William Love in the intermediate doubles clash with Cavan.

Going into the final the Love brothers were confident. However, they  played well below par and came off second best, losing  21-6, 21-13.

In the afternoon at Abbeylara, there were two All-Ireland ladies titles up for grabs in the intermediate and minor grades.

The Kilkenny ladies got off to a great start, winning the first set 21-0. Even though they were under some pressure in the second they still won  convincingly, 21-12.

The second match at the midlands court was the ladies Minor doubles, again between Kilkenny and Roscommon.

Having overcome Tipperary in three sets in the semi-final, Kilfane’s Aoife Holden and Ailis O’Shea again went three games before claiming the victory.

Losing the first game 21-12, the Kilfane ladies produced some top quality handball in the next two games, winning 21-20, 21-20 to secure a memorable victory.

In the EMAD final, Johnny Brennan and Joe Hennessy continued their recent good form with victory over Galway at Crinkle on Sunday.

Having already collected the 40x20 title  in this grade, the Mothel/O’Loughlin’s combination added the All -Ireland 60x30 crown with this convincing win in two games over the Westerners at the Offaly venue.

In the All-Ireland juvenile semi-finals  at Kilfane and Talbot’s Inch on Sunday, there was a mixed bag of results for Kilkenny players.

In the boys matches at Talbot’s Inch, the Kilkenny under-14 doubles pairing of Jack Doyle and Padraig Foley defeated Tipperary in two sets.

There was disappointment for Kilkenny in boys 16 singles and doubles. The Clogh pair of Ciáran Cooney and Billy O’Neill lost to Cork, 11-7 in the tie break of their doubles match, and in the singles  Eoin Brennan also lost in the tie break, 11-9, to Kerry’s Daire Keane.

At Kilfane, Sorcha Delaney scored a 21-13, 21-3 victory over a  Cork opponent to reach the girls under-17 singles decider.

On  Saturday at Croke Park, William Love has a chance to make up for last weekend’s doubles defeat when he plays in the All-Ireland intermediate singles final against Ollie Conway (Galway).

On his way to the final, the Clogh player has been in impressive form, no more so than in his semi-final win over Limerick. Hampered by illness in his doubles final last Saturday, a return to his semi-final form will give him a great chance of  victory.