It is collision time for the champions past and present

Nowlan Park to be hive of activity 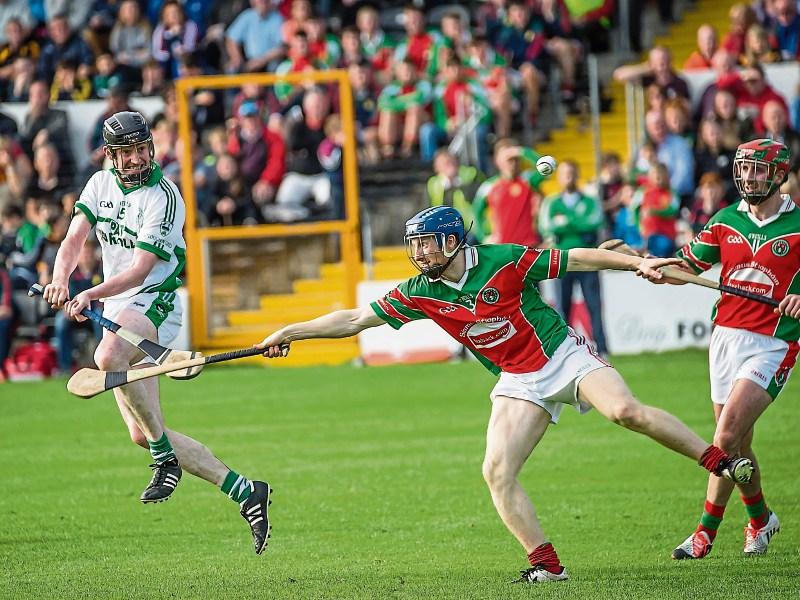 UP, UP AND AWAY! Momentum takes Martin Comerford (O’Loughlin Gaels) into the air after he gets his shot away, despite the best efforts of Tomas Keogh (James Stephens) during the senior hurling champio

One clash was probably the wish of the silent majority for the final, but the second represents a great opportunity for the clubs involved.

That was the story after champions present and past, Clara and Ballyhale Shamrocks, were pitted against each other in the senior hurling championship semi-final.

Many viewed them as the county final pairing, but fate decided otherwise.

However, the second semi between beaten finalists of last year, O’Loughlin Gaels and the Rower-Inistioge offers both an equal chance of making the county final.

The big shoot-outs will be staged as a double header in Nowlan Park on Sunday, with the Gaels and the Rower getting things underway at 2pm.

The throw-in for the second match is at 3.45pm.

The head-on meeting of Clara and Shamrocks is akin to two hurling juggernauts colliding. Both are motoring at full speed right now.

Both turned in impressive showings in the quarter-finals at the weekend.

The champions were slow enough into their stride. When they found the right gear, with hugely involved sub Austin Murphy stirring things up, they hit Dicksboro for a staggering 1-14 against 0-2 during the closing 20 minutes when they simply went into overdrive.

Chris Bolger, Lester Ryan, Tom Ryan and company didn’t spare the opposition when they found their game, and it all looked so easy for them in the end.

They won easily by 3-20 to 1-11 with T.J. Reid shooting 1-8, while his brothers Richie and Eoin, plus new boy Ronan Corcoran, also looked very lively.

Shamrocks won the League final two weeks ago, so they have the big double on the agenda. Clara did the double last season, remember.

Many reckon both are not the potent force they were, but fans looking at them at the weekend couldn’t but be impressed.

Meanwhile, O’Loughlin’s were also troubled by the slow starting bug in their quarter-final against James Stephens.

They were under a lot of pressure during the opening 20 minutes, but a goal from Sammy Johnston and point from Martin Comerford just on half time changed things.

The St John’s Park crew led all the way home from there, with Paddy Deegan, Marks Bergin and Kelly and Comerford driving the cause with most force.

The Rower welcomed hardy defender, Sean Cummins, back after illness and his presence allowed the freedom to make deft changes which improved the overall effectiveness of the team.

The looked good when beating St Martin’s, but it has to be said, the latter were poor up front. The Rower last appeared in the final in 1977.

Whatever, the ’Park will be buzzing on Sunday.

Admission to the attractive double header will be €15 and €10 for pensioners/students. Under-16s’ are free.

Saturday’s heavy schedule of big championship games will also include the junior semi-final between Dicksboro and John Lockes (Callan) in Nowlan Park (3.45pm), while the postponed quarter-final tie between Blacks and Whites and Barrow Rangers (Paulstown) has been re-fixed for Clara (2pm).