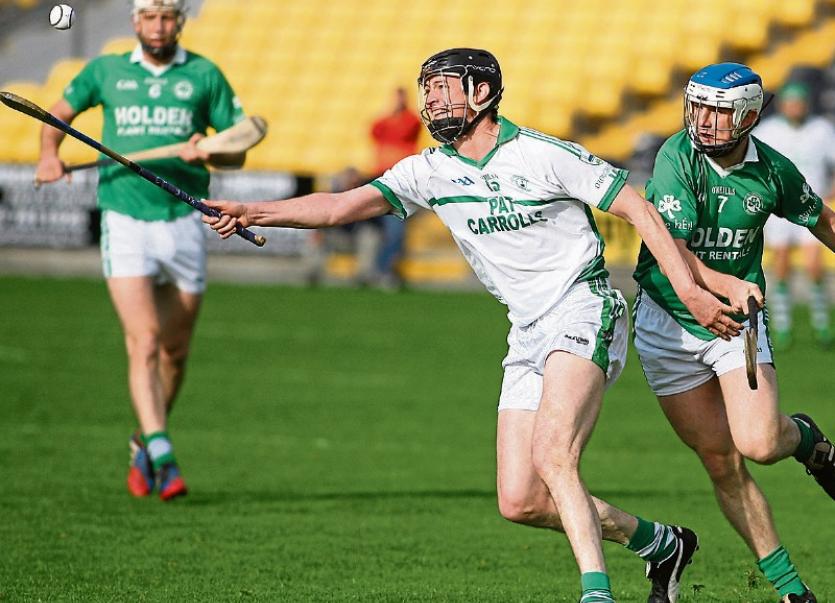 The contestants in Sunday’s senior hurling final are winners already!

Ballyhale Shamrocks are the current Kilkenny senior hurling league champions, while opponents O’Loughlin Gaels won the Shield, the secondary competition at the end of the league.

The pair will turn  it into a blank season at the top level for all others when one of them takes charge of the Tom Walsh Cup following the  big showdown in Nowlan Park.

The mighty Shamrocks are chasing a 16th win, having packed their previous victories into a not so long period between 1978 and 2014.

O’Loughlin’s won the senior crown in 2001, 2003 and 2010, the  latter when Martin Comerford was captain and current colleagues Stephen Murphy, Andy and Eddie Kearns, Alan O’Brien, Brian Hogan, Mark Bergin, Alan Geoghegan and Danny  Loughnane were in the colours.

That list reflects  a fair turn over in players, but Shamrocks don’t need telling about such things.

Since they won their last county title, which was followed by success in the All-Ireland club championship a mere 18 months ago, they have shed nine first team players.

Despite the big turn over in personnel,  both have managed to hang around the upper echelons and to be very competitive.

And with Shamrocks having won a class  minor ’A’ county final at the weekend, the flow of talent through the ranks should be okay over the next few years.

Who will win is hard to know. The pair met in the fifth and final round of the league on September 17 when a single point separated them.

They met in last year’s championship semi-final when O’Loughlin’s won by 2-15 to 2-13, only to lose the final against Clara.

Those results, while in different competitions with vastly different meanings, would suggest there is little or nothing between them.

Both joined the 2016 championship action in the quarter-finals, getting a bye through as a result of  their strong showings in the league.

In the knock-out competition O’Loughlin’s have seen off James Stephens and the Rower-Inistioge, scoring 3-29 while conceding 0-30.

Against that, Shamrocks ran up a score of 3-39 while conceding 1-27 (the same as the opposition) in their two wins over  Mullinavat and then champions, Clara.

O’Loughlin’s got through their semi-final with the help of two bad errors by the Rower, which resulted in the concessions of goal.

However, once O’Loughlin’s got a break, and got into a decent stride, they motored on nicely to victory.

They did the same against The Village  earlier. They hardly showed  during the opening 20 minutes, but then approaching the break Sammy Johnston nicked a goal and Martin Comerford a point  and suddenly they were in control.

In control they may have been in both matches, but their grip was far form vice-like. Still, there was a noticeable improvement in their play, which was good.

If they get the drop on Shamrocks they will have to be forceful in their drive to the line. Otherwise they will be playing a deadly serious game against a side with perhaps the best scoring power around.

Outside the usual big performers like Marks Bergin and Kelly, Martin Comerford, who is having a first class season, and Brian Hogan, O’Loughlin’s have been driven by the Kearns brothers, Andy and Eddie, the emerging prospect that is Paddy Deegan and Alan Geoghegan.

Manager Aidan Fogarty and his selectors (Nigel Skehan, Michael Holohan and Derek Shelly) would obviously like their team to push on with more force, but at least they have been improving all the way since winning the Shield, and they have been winning.

The reorganisation of the  Shamrocks squad by management (Colm Bonnar, Andy Moloney, John Dermody and Tom Walsh) has been far reaching.

They are soldiering without that great and influential warrior, Michael Fennelly, who hopes to be able to return after injury (Achilles tendon) in mid-year 2017, and with a batch of other good ones like Alan Cuddihy, Aidan Cummins, Conor Walsh and James ’Cha’ Fitzpatrick also missing from the All-Ireland winning team of 2015.

They have to be given huge  credit for  the way they have done their business.

And that ’business’ has left  them a mere 60 minutes from completing the senior league/championship double!

To date the championship fare has been wholesome, but it  hasn’t really sent the pulse racing. Games have been competitive and engaging, but there hasn’t been one that people could say yes, that was a sizzler.

The Shamrocks v Clara semi-final went close to reaching  boiling point during the closing 15 minutes or so, but it never exploded into a rip-roaring affair.

However, when that little bit extra was needed to get them over the line, their big men like Colin Fennelly, T.J. Reid and Eoin Reid  produced the goods in attack.

This is where the most serious threat will come from as far as O’Loughlin’s are concerned, because in general terms, the squads match each other.

Sure, the Shamrocks are well served by a host of others including Henry Shefflin, who still has the eye and touch to produce big scores or passes, Mark and Bob Aylward, Joe Holden and Richie Reid in a new role as a defender.

Indeed, the influence of the same Reid will have to be curbed too, because he cannot only launch attacks, he can pick off scores from  the half-back line  and midfield.

But how O’Loughlin’s cope with the threat of Fennelly and the two Reids will have a big bearing on the outcome of the game.

Planning a match winning strategy will involve serious thought on this matter against a team with the firepower to land the spoils.

Sunday’s senior county final will be the second time O’Loughlin’s and the Shamrocks go toe to toe for the Walsh Cup.

The final is also something of a clash between the new kids on the block. O’Loughlin’s were founded in 1969, three years before the Shamrocks came on the scene. Since then they’ve won 18 senior titles between them - who’ll win this one?