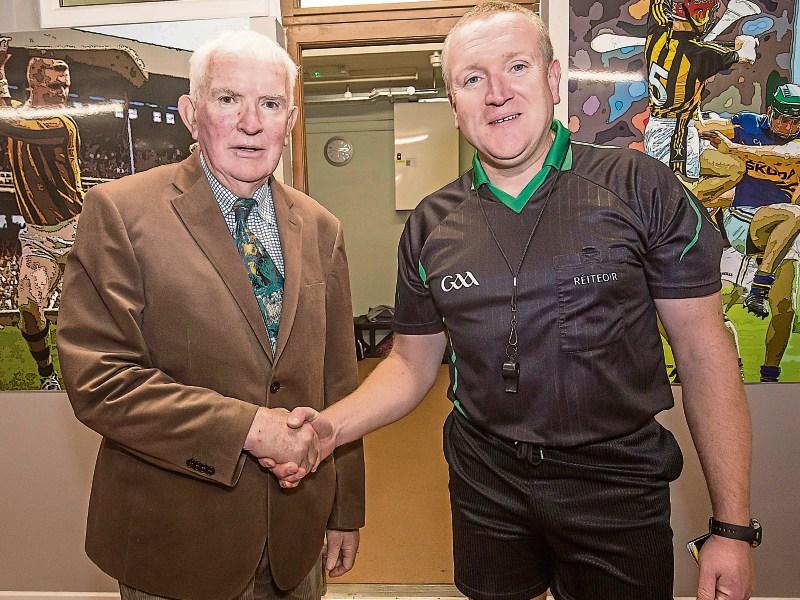 It was like father like son for the Dowling family, Kilmacow, in Sunday’s county senior hurling final.

Match referee, Richard Dowling followed proudly in the footsteps of his dad, Richard (senior) by taking charge of a senior decider.

His son took charge of his first senior final on Sunday. There to shake the ref’s  hand and wish him well as he headed out on the Nowlan Park pitch was his delighted 78-year-old dad.

“It was a hugely proud day for our family,” insisted Richard (junior), who has been a knight of the whistle for nine years.

“I never thought I would get to do a senior final. It was a nice honour, and it was great to have dad there.

“It went well for me, but two teams who came to play hurling made my job easy. The boss gave me the thumbs up.”

Richard (jnr) officiated at  two intermediate finals and at all under-age deciders in the past, but this time  he got the nod for the big one.

“I don’t think it has ever been done in Kilkenny where a father and son refereed senior finals,” Richard said. “Uncles and nephews have done it, but we don’t think a father/son has been recorded.”

The match official’s brothers  tuned into the commentary via computer from all parts - Donal in Qatar, John in Spain and Padraic in London.

Dick (senior) was a secondary school teacher. He was a  Fine Gael TD in Carlow/Kilkenny for five years (1982 to ’87), and he served on the County Council for 35 years, representing   the Piltown district.

He is a native of  Glenmore  and he played all his life with the club.

In 1969 when Glenmore were beaten in the championship he suggested to then Co. Board secretary, Paddy Grace, he was thinking about taking up refereeing. Two weeks later he officiated at a senior semi-final.

His  second big match was the  senior final of the same year!