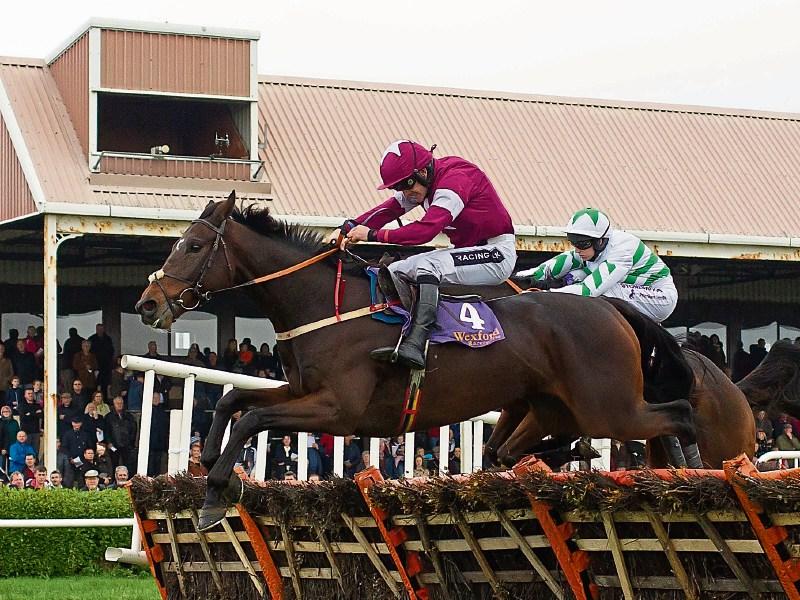 The Willie Mullins-trained Vautour, one of very few horses to win at three consecutive Cheltenham Festivals,  had to be put down.

Vantour suffered a fatal leg injury when grazing in his paddock on Sunday.

Winner of 10 of his 16 races, Vautour was owned by Mrs Susannah Ricci and put up some memorable performances in his all-too-short career.

An unbeaten novice hurdler in the 2013-2014 season, he gained his first Cheltenham Festival success when winning the 2014 Supreme Novice Hurdle in great style but he promised to be even better as a chaser and so it proved.

His performance in the 2015 JLT Novice Chase at the Cotswolds was one of the most memorable displays ever produced by a novice at the famous meeting when he simply pulverised the opposition to win by 15 lengths.

Last December he was nailed in the very last strides by Cue Card in a pulsating finish to the King George VI Chase at Kempton.

Having been a late defector from the 2016 Gold Cup, he then ran out a most impressive winner of the Ryanair Chase.

He will be remembered as one of the most talented National Hunt performers of the modern era.

Aidan O'Brien won the Longines Breeders' Cup Turf for the second year in-a-row as Highland Reel followed in the footsteps of Found at Santa Anita on Saturday night to give Seamie Heffernan his first Breeders’ Cup winner.

On one of the rides of the season, Heffernan gave a masterclass from the front to land the spoils in stunning style.

From Sallins, County Kildare, Heffernan dictated a slow pace on Highland Reel before quickening to open a decisive lead with less than half a mile to travel.

Flintshire got closest of the chasing pack but could not reel in the winner, while Found had to settle for third place under Ryan Moore this time and has now been retired.

Heffernan said: "I was on a horse that handled the conditions well. He's straightforward, he's very sound and he stays hard.

“If I had the choice I would have ridden Found! But it is nice to be on the team and it is nice to get the opportunities. I have a lot of people to thank."

He shared the opening maiden hurdle with Gordon Elliott, who sent out 4/5 shot Sanibel Island to score in fine style.

The pair doubled up later in the afternoon when securing the beginners’ chase with 4/7 favourite Ball D’Arc.

Walsh had earlier joined forces with Henry de Bromhead to land the 2mile  4 furlong  maiden hurdle with Burndown, who only had a head to spare over Call The Taxie after being sent off the 4/5 market leader.

Walsh could only manage second place on the Willie Mullins-trained Bobarlee, who proved no match for Shark Hanlon’s Magna Cartor, who won the rated hurdle at odds of 4/1 under Rachael Blackmore.

Willie Codd, who trains locally in Mayglass, was on the mark with 5/1 chance Tellthemnuttin, who took the opportunity handicap hurdle in the hands of Chris Timmons.

Bay Of Freedom, trained in Monasterevin, County Kildare by Peter Fahey and ridden by Kevin Sexton, scored an easy success in the Listed MW Hickey Memorial Chase at odds of 8/1.

The longest-priced winner of the day came in the bumper which went to the 20/1 outsider Play The Part, who got up on the line to win for Curragh-based Mark Roper.

The winner was a first race course success for 22-year-old Archie Macauley from Blessington, County Wicklow.

Only the third choice in the market at 4/1, the six-year-old, formerly trained by Willie Mullins, made much of the running and had plenty to spare over 5/4 favourite Free Expression.

On his first start since July, the Joseph O'Brien-trained Kalopsia showed plenty of determination to see off the Noel Meade-trained Lettre De Cachet under Barry Geraghty in the opening maiden hurdle.

The winner was returned the 6/4 second favourite and was the first of three winners for the former champion jockey who also partnered 3/1 favourite Hash Brown to win the 2mile 6 furlong handicap chase for Michael Hourigan and took the 2 mile 5 furlong  handicap hurdle on the Tom Mullins-trained 7/2 favourite Scoir Mear.

Meade got the better of Joseph O'Brien when She’s A Star, a 7/2 chance, saw off 9/4 favourite Oathkeeper to land the rated novice hurdle under Sean Flanagan.

Aengus King, who trains in Newmarket-On-Fergus, County Clare, landed the second handicap chase over the same distance with 7/1 shot Capture The Drama who was ridden by Andrew Ring. Jessica Harrington and Katie Walsh took the bumper when evens favourite Jelan, a sister to Jezki, ran out an easy winner.

Sent off a 3/1 chance, the nine-year-old ran out an easy winner in the hands of Danny Mullins and will now go handicapping.

Willie Mullins and Ruby Walsh landed the opening two-runner mares’ chase with 1/12 favourite Listen Dear who had a little in hand when accounting for Thanks For Tea by half-a-length.

It was Mullins’ only runner of the day and a double for Gordon Elliott allowed him extend his early lead in the trainers’ championship.

Elliott was on the mark with the Walsh-ridden Dounikos who landed the 2m7f maiden hurdle at odds of 9/10 favourite and 5/2 co-favourite Hardline who took the bumper under Luke McGuiness.

Paul Power, who is based in Butlerstown, County Waterford, both trained and rode 10/1 shot Game Puppeteer to win the 2m handicap hurdle.

Over the same distance, 7/2 shot Bridge Native won the mares’ maiden hurdle for Dot Love and Mark Walsh, while the father and son team of Philip and Luke Dempsey won the mares’ handicap hurdle with Teacher’s Pet, the 4/1 favourite.