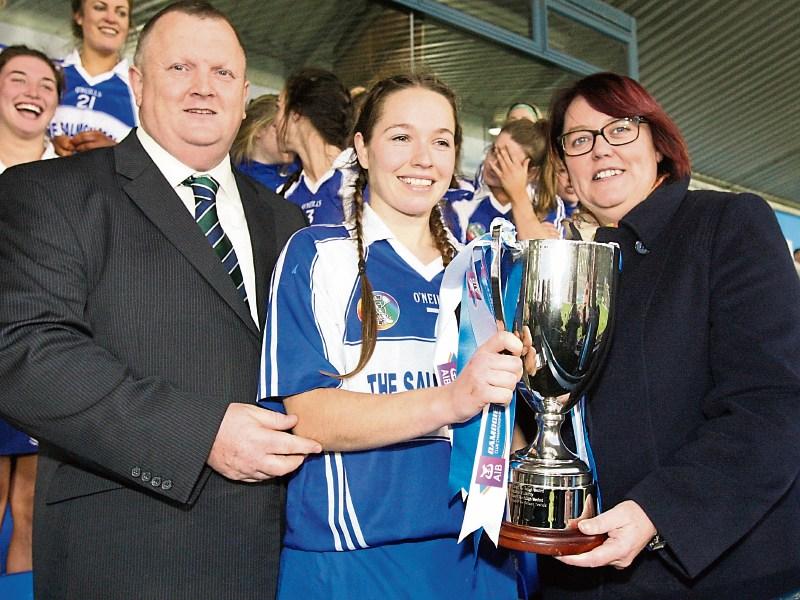 The season just gets better and better for Kilkenny camogie.

On top of all the other honours harvested by the county this season, now senior champions Thomastown added the Leinster club title.

The South Kilkenny girls performed their version of the late, late show when pulling the carpet from under valiant St Vincent's (Dublin) in a thrilling final.

With the clock ticking towards the 63rd minute Thomastown charged at the Vincent's goal and Catherine Walsh grabbed the goal that decided the match.

It was tough, tough luck on St Vincent's who played really well and had the opposition in trouble at time.

The 'Town were in serious trouble passing the 40th minute when 0-3 to 0-8 behind.

However, inspired by player of the match, Shelly Farrell, they stormed back to claim an historic victory against huge odds.

Farrell  was in the thick of things for the match clinching goal. She burst up the field and rifled a shot at the St Vincent's goal, presumably for what would have been the levelling point.

The home goalie,  Nicole Burnett stopped the ball going over the bar by  batting it out. It fell kindly for   Catherine Walsh, who didn't think twice before blasting to the net.

There was simply no time for St Vincent's to recover or respond, and for the second consecutive year   heartbreak was their lot in the Leinster final.

Big hearted Thomastown were utterly defiant during the closing 20 minutes. They refused to let the title go, and from a near lost situation they drove back to win.

The defence was superb during the late drive for victory, and held the opposition scoreless.

The exchanges during the opening half  were  fiercely contested.  There was little between the team for a good spell but then the Dubs picked off  four unanswered points before half-time to jump  0-6 to 0-3 clear at the break.

The losers drove  on after the rest and  extended the  advantage to five points  when the deadly accurate  Alison Maguire landed two frees.

Maguire was Vincent's main source of scores, and Áine Fanning was their only other scorer. Thomastown, on the other hand, produced five  scorers from play.

The scoring was opened by  Jenny Reddy and was added to by  Niamh Donnelly as the wind assisted Cats found their feet early.

Slowly the Vincent's defence got to grips with the demands  and they got off the scoring mark with a  free from  Alison Maguire.

Vincent's got on top  and after her second point from a free Alison Maguire landed a marvellous  point from near the right sideline to give the home side plenty to cheer about.

Vincent's had the opposition in a bit of a bind, and  their defence, particularly Áine Woods, Deirdre Johnston and Eimear McCarthy at midfield, were really hurting the opposition.

The winners were under pressure, and they conceded frees, which Alison Maguire turned into scores.

With half time  approaching  Mary Cronin did really well to recover the ball, pass to Áine Fanning, who flashed over a lovely  score.

At half time Thomastown introduced Eimear Farrell and Catherine Walsh, both of whom would be central to the outcome.

The winners took time to get their A-game rolling as  the opposition maintained  the strong  momentum that took them into a nice lead at the break.

A free and 45 from Alison Maguire  extended their advantage  to 0-8 to 0-3, and they were looking good.

Thomastown never dropped the heads. They powered on. A  point from Niamh Donnelly in the 46th minute helped spark the revival.

Anna Farrell and Jenny Reddy began to exert their influence at midfield and pumped a great  supply of ball forward. Eimear Farrell pointed  in the 50th minute to add to the gains.

Unable to make any gains up front, Vincent's began to feel the strain.

Niamh Donnelly picked off  her third point from a free in the 52nd minute and Vincent's were beginning to look edgy.

Another Niamh Donnelly pointed free left  the game on a knife edge  in the 57th minute before Catherine Walsh produced her late golden strike.