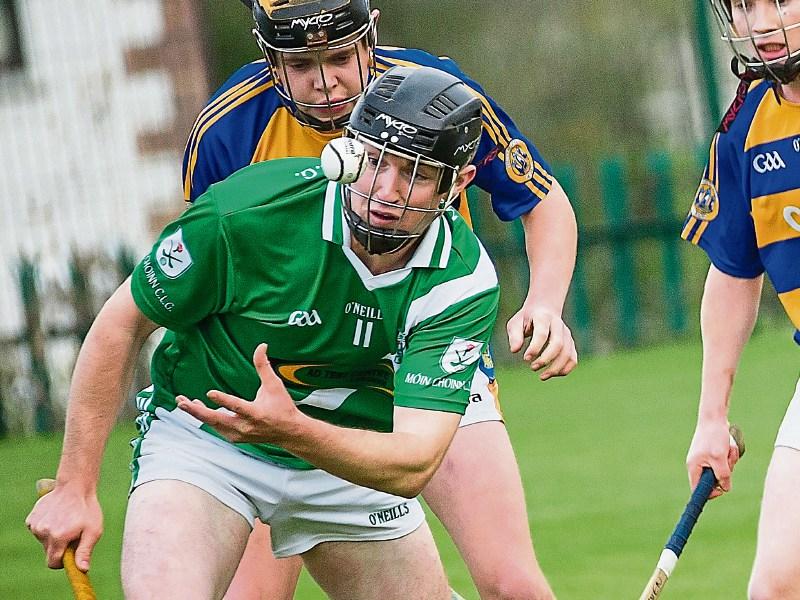 Sean Walsh, one of the young and talented Mooncoin players

The demands of history mean that Kilkenny junior hurling champions, Mooncoin must always think big, and they do.

They have a club grounds, complete with stand, that is second to none, but alas, on the field of play, things have not been as rosy in recent times as they once were.

After all, Mooncoin are the third biggest winners of the senior hurling championship in Kilkenny with 12 victories to their credit.

But these times they operate at junior level - to be upgraded to intermediate come the 2017 season - and their recent win over John Lockes (Callan) in the county final was their first success at that level since 1961.

They tumbled back junior in 2013 when beaten in a replayed intermediate relegation final by Young Irelands (Gowran).

On Saturday in Nowlan Park (2pm), the Mooncoin men will take their next step on the hoped for road to greater things when they face Meath intermediate champions, Ratoath  in the Leinster club junior hurling final.

The Noresiders opened smartly in the championship when beating St Fechins (Louth) by 1-19 to 1-10, but things didn’t go exactly as planned when they edged past St Oliver Plunketts in the next round (2-11 to 1-7).

The South Kilkenny outfit  were the better team, no doubt, but they got drawn into a couple of needless situations and they finished with 13 men.

One of the players sent off was shown a straight red card, which means he is out of Saturday’s game.

The upshot of it all is that Mooncoin know they can, and must, play better.

They are on a learning curve, but the Leinster title is top of their agenda right now.

There is a nice balance to their team, which includes big and strong players who should be able to  manage most conditions, even the heavy going that is common so late in the year.

The spine of their team is strong, from full-back Niall  Mackey to towering target man, Eamon Hennebry at full-forward, who can be a handful for any opposition.

If Mooncoin hit form, Ratoath will have to attain a standard rarely achieved if they are to stop them.

That is the story in a nutshell about this final.

Ratoath have seen off Carlow Town (2-20 to 2-9); Clodiagh Gales, Offaly (1-13 to 2-8) and double chasing (they won the junior football two weeks ago) Rosenallis (Laois) after extra time in the delayed semi-final at the weekend.

Ratoath were a point down at the 60 minute mark, but they equalised when the impressive Padraig O’Hanrahan pointed from 40 metres out to tie up the scores at 0-16 to 1-13.

There was little between the sides in extra-time. The score was level at the break  (0-19 to 1-16) and with the contest drawing to a close, Ratoath brought on substitute Paddy Coady.

He was only on the field when he neatly finished to the net from close range to grab the ticket into the final for Ratoath.

The standard of club hurling in Kilkenny is of such a level, that champions depart the county well prepared for the demands of Leinster, and beyond too.

Mooncoin should have no fear, but they  have been warned, and at the double at that.

They know they should have sealed the deal with less trouble against St Oliver Plunketts.

Equally, they know Ratoath are gritty, and they won’t surrender too easily.

Now it is up to Mooncoin to make big things happen. They have the hurling to do it, if they don’t allow themselves to be distracted.