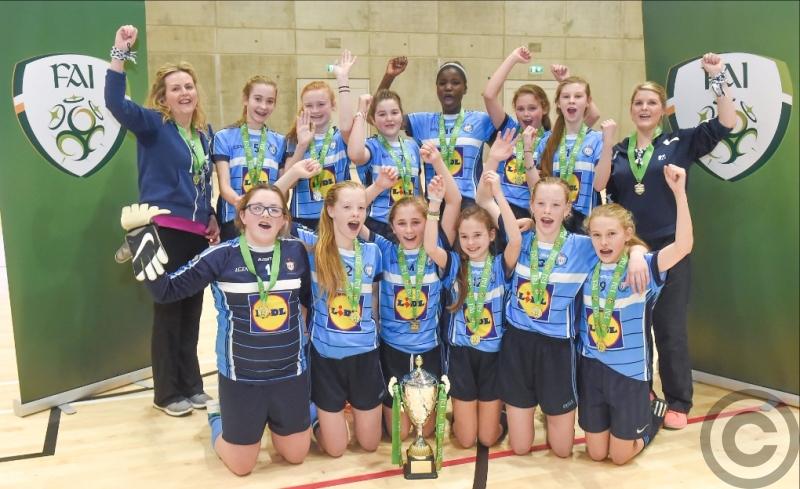 The praise was loud for the girls from the Presentation Secondary School after they scooped a national futsal title.

Played in the Waterford IT Arena in Carriganore the Kilkenny side overcame several tough battles to get their hands on the coveted FAI crown. It marked an incredible week for the school , as their school claimed a National volleyball title just 24 hours earlier.

The first series of games kicked off with all four schools securing a point to kick start their campaign. Loreto CS, Milford and Pobalscoil Inbhear Scéine played out a scoreless draw while Presentation SS, Kilkenny drew 1-1 with Claregalway, Ellen Molloy’s effort for the Pres cancelling out overall top scorer Shauna Brennan’s strike.

Things got better in the second round for the Presentation, as they earned a big win over Donegal’s Loreto CS.

In a seven goal thriller, Keara Ryan (2), Niamh Phelan (2) and Ellen Molloy were all on target for the Pres as they won 5-2, Aisling McCormack and Kelsey McAteer grabbing consolation goals for Loreto. In the other game Claregalway outplayed the Kenmare girls 4-0 to take some valuable points. Shauna Brennan (2), Kate Slevin and Blathnaid Kelly were all on the scoresheet.

Having developed a taste for victory the Kilkenny side continued on their winning ways when they came out 3-1 winners against Kenmare side Pobalscoil Inbhear Scéine in the third series of games.

Ellen Molloy (2) and Niamh Phelan scored while Abbie Murray got the Kerry contingency off the mark for the afternoon. Claregalway put four past the Donegal side as Shauna Brennan picked up her hat-trick and Kate Slevin netted late on.

Midway through proceedings the Presentation faced another big battle against their fellow high scorers Claregalway College. While the first game ended all square the Kilkenny side made sure victory was theirs this time as they edged a pulsating encounter by the slenderest of margins, winning out 3-2.

Ellen Molloy (2) and Keara Ryan got on the scoresheet for the Cats, but they had to work hard as a Shauna Brennan brace saw Claregalway push them all the way. Loreto CS produced a strong display against Pobalscoil Inbhear Scéine as Sinead McBride and Kelsey McAteer got on the scoresheet to outdo Abbie Murray’s earlier goal winning out 2-1.

The penultimate series of games saw Presentation overcome Loreto CS 4-1 with Niamh Phelan (2), Ellen Molloy and Keara Ryan all beating the Donegal keeper. Aisling McCormack was again on hand to score for Loreto.

Meanwhile an impressive performance from Claregalway saw Shauna Brennan bag her second hat-trick of the afternoon. A brace from Aoife Killilea, plus one from Blathnaid Kelly saw them beat Pobalscoil Inbhear Scéine 6-0.

The last matches of the day saw Presentation Kilkenny finish with a 4-1 flourish against Pobalscoil Inbhear Scéine. While Laurie Adams struck for the Munster champions they were no match for the Pres, who marched to victory with an Ellen Molloy hat-trick and another goal from Niamh Phelan. Claregalway kept up the pace, slotting three past Loreto CS, but that loss to the Pres meant they had to be content with the silver medals.

There was some consolation for the Westerners, as Shauna Brennan finished top scorer with 12 goals. However, Ellen Molloy’s 10-goal haul ensured it was the Pres who would be going home with the spoils.