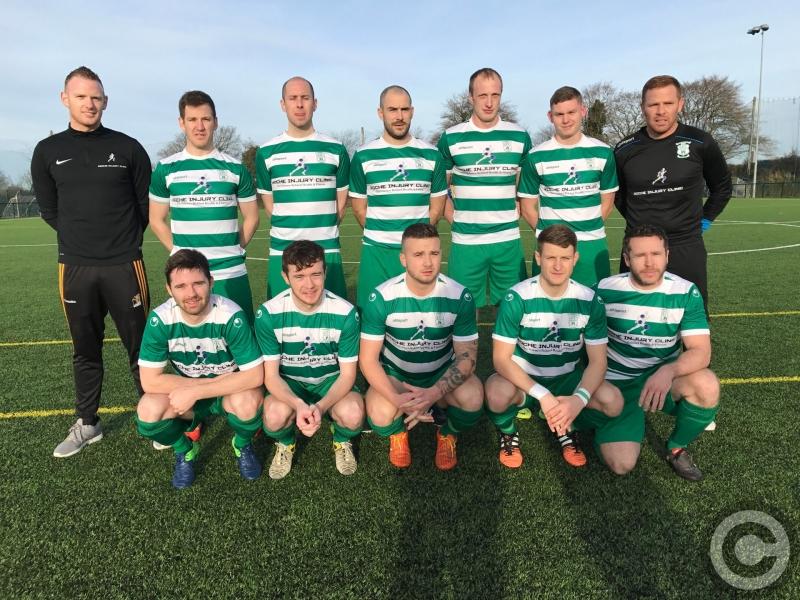 The Evergreen team who were beaten by Collinstown in the Leinster Junior Cup.

Evergreen’s Leinster Junior Cup hopes were cut short after they endured a frustrating day in front of goal.

Beaten finalists last season, the city side were hopeful of going one better this time, but will have to wait for another year after Collinstown stopped them in their tracks on the Kells Road.

Evergreen started the game brightly, going close with an early Chris Whearty effort before Mark Slater tried his luck with a shot from outside the box.

The home side kept going at full tilt, but couldn’t make their efforts count. Niall Andrews went close to creating the opener when he flicked a Tommy Earls throw-in across the box, but no team-mate was there to capitalise.

The best chance of the first half for the hosts came after 28 minutes, when Ben Hickey beat his man and fired in a dangerous cross. Mikey Drennan pounced, but his close-range shot was brilliantly saved by Collinstown ’keeper Ross Costigan.

It seemed to be only a matter of time before Evergreen broke the deadlock - but they were stunned when Collinstown hit them on the double before the break.

Veteran striker Graham Doyle did the damage, netting both goals in a real purple patch for his side. He flattened the hosts with the opener on 35 minutes, seizing on Philip Yourell’s pass and rolling his marker before hitting the net.

If Evergreen heads were spinning at that stage, they were reeling when Doyle netted his second from a clever free-kick two minutes before the break.

Evergreen piled on the pressure in the second half, but were held out by some resolute defending and great goalkeeping from the visitors. They continued to pour forward in attack - Niall Andrews forced a good save from a long range shot on 53 minutes. He and Drennan had headers saved by Ross Costigan, who also did well to deny Sean Barcoe as the game moved into the final quarter. Their task of getting back into the game became even harder when sub Simon Burke was red-carded. Still, the hosts pressed on, but knew it wasn’t going to be their day when Barcoe was denied again by the combination of Costigan and the crossbar.