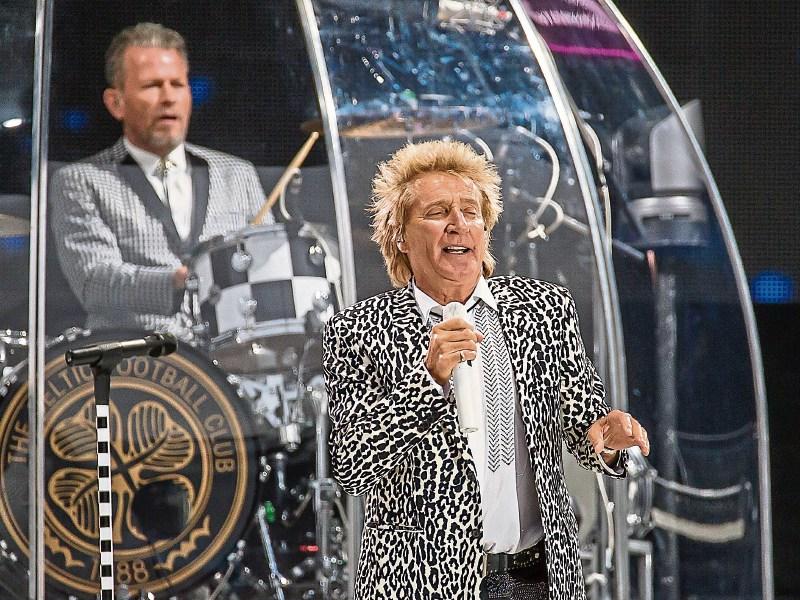 Rod Stewart, or Sir Rod, had fans rocking during a concert in Nowlan Park this Summer.

Nowlan Park is fast becoming a hot tourist attraction in Kilkenny City, and the GAA and Kilkenny Tourism are to explore ways of promoting it and Gaelic games in general.

County Board secretary, Jimmy Walsh, in his annual address to Convention reminded delegates that during the season top sports commentator, Jim McGuinness, described the ’Park as not only of a county grounds standard, but also of provincial standard.

McGuinness, who visited many grounds in a number of codes at national and international level, was in Kilkenny reporting on Dublin’s Leinster championship match against Laois, and he was really taken by what Nowlan Park had to offer as a venue for games and other activities.

In recent times 300 additional seats, a ‘Hall of Fame’ corridor, new turnstiles, toilet blocks and shop were added to the facilities in the ’Park.

The capacity was now at 28,000, with seating for over 17,000, which is the highest in Leinster outside of Croke Park.

Mr Walsh said  the news at the recent IRFU press conference concerning the Rugby World Cup and a possible involvement for the Kilkenny grounds projected Nowlan Park’s profile far beyond the GAA and Ireland’s boundaries.

“Its achievement reflects well on the foresight of the local organisation that looked after its transformation over many years,” he insisted.

“Its potential to be a player in a worldwide game on a worldwide stage will raise the Kilkenny profile and benefit both the city and county.

“Following all the recent developments, major matches, TV coverage and the success of the senior hurling team over a prolonged period, Nowlan Park now attracts an ongoing stream of visitors,” the secretary added.

“For them a trip to the stadium is a must-see before they leave Kilkenny.

“The people are from all corners, all nationalities and from all sporting backgrounds. In many cases their love and knowledge of the game and our local hurling heroes can be astounding and reflects anything bar an ABK attitude.”

As a result, he said, the time for an open day to provide an organised opportunity to visit the ground has arrived. The hosting there of the October monthly meeting of Kilkenny Tourism, a voluntary body, was a revelation.

Following it, regular interaction through a sub-committee has led to plans to jointly promote all that is good in hurling heritage and culture that is repeated across all of the club areas in Kilkenny city and county.

Mr Walsh, who hails from Windgap, revealed the way has been cleared for the oft delayed official opening of Ardán Cearbhaill; the re-roofed Ardán Breathnach and its media area and the extended Aras Cearbhaill.

“In conjunction, an Open Day for the public, some time around St Patrick’s Weekend, is planned,” Mr Walsh revealed.

In his annual address, chairman Ned Quinn, said the inclusion of Nowlan Park in the list of potential venues for Ireland’s bid to host the 2023 Rugby World Cup was an endorsement of the decisions made by the County Board in recent years regarding the various upgradings.

He reminded that the two events that attracted the biggest crowds to the ’Park this year were the Dublin/Laois Leinster championship football game and the Rod Stewart concert.

“In addition to the income we received, both events contributed substantially to the local economy and to our City’s reputation as a tourist destination,” he insisted.