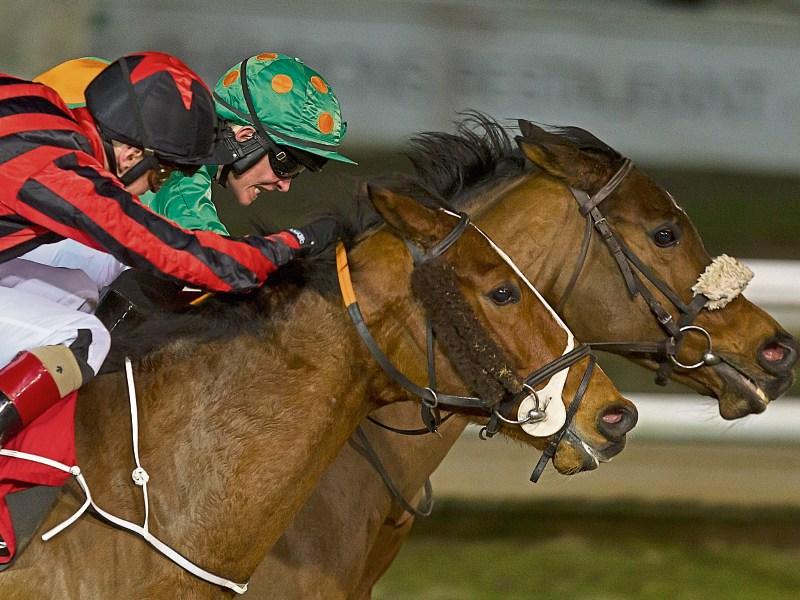 Full Shilling, with Denis Linehan aboard, won from No Way Jack in Dundalk

There were celebrations in Ballyhale as trainer Ellmarie Holden celebrated a big winner at Fairyhouse on Sunday.

The Kilkenny trainer teamed up with  leading conditional rider Rachael Blackmore as 10/1 shot Ex Patriot took the spoils in the four-year-old maiden hurdle. Victory also brought Blackmore’s tally for the season to 20 winners.

Sent off the 3/1 favourite, the six-year-old was in front shortly after the second last fence and raced clear to win by nine lengths from Pairofbrowneyes.

Elliott and the 17-year-old Kerry rider had earlier combined to win the mares’ maiden hurdle with Barra, the 5/4 favourite winning from her main market rival Kate Appleby Shoes by all of 12 lengths.

Sean Ahern, who trains in Conna, Co Cork sent out Nicole’s Milan to take the 3m handicap hurdle at odds of 14/1 in the hands of Phillip Enright.

An easier one to find was even money favourite Ballyoisin who ran out the comfortable winner of the beginners’ chase for Enda Bolger and Barry Geraghty. Another popular winner was Laid Back Luke, who was the 4/1 winner of the rated novice chase for Meath trainer Sheila Lavery and Robbie Colgan.

Henry de Bromhead and amateur rider David Roche combined to take the bumper with newcomer Paloma Blue who was returned the 6/1 winner.

A 66/1 winner on his debut, he was only a 6/1 shot on this occasion but came through to lead early on the run in to beat 4/11 favourite Crack Mome and Runfordave in good style.

It was a second winner on the day for Walsh who had earlier taken the beginners’ chase on the Joseph O’Brien-trained 9/2 shot Edwulf.

Paddy Neville, who trains in Askeaton, saddled 16/1 shot Tulpar to win the opportunity handicap chase under Ryan Treacy, who beat the Katie O’Farrell-ridden I’m An Izz Wizz by a nose.

Canaly landed the historic Conyngham Cup Handicap Chase at odds of 16/1 for Sandra Hughes and Derek O’Connor while a far better fancied winner was Gunnery Sergeant who took the 2m maiden hurdle for Noel Meade and Sean Flanagan at odds of 13/8 second favourite.

The bumper also went to a well-supported winner as 3/1 chance Fintara landed a gamble when successful for the mother and daughter team of Jessica and Kate Harrington.

Denis Linehan rode the first double of his career at Dundalk on Friday night.

From Glantane in Co Cork, Linehan rode a winner at the track on his 18th birthday two days before Christmas and he was back in the number one spot as 6/4 favourite Strategic Force, trained by Ger O’Leary, easily landed the opening 5f handicap.

Linehan’s double was completed when Full Shilling, trained in Ashbourne by Paddy Mooney, held off the late challenge of Pat Martin’s No Way Jack to win the second division of the apprentice handicap at 9/1.

Robbie Downey rode the winner of the opening division of the same race on the Prunella Dobbs-trained 3/1 chance Arbourfield who beat Secret Path, another trained by Pat Martin, by a length and a quarter.

Martin, who trains in Navan, didn’t leave empty-handed as his 8/1 shot Lady Rosebud landed the 7f handicap, a second winner on the evening for Wayne Lordan.

Lordan had earlier made all the running to take the 2m handicap on 3/1 shot Winter Lion for Kilmessan trainer Matthew Smith.

Ger Lyons and Colin Keane were on the mark with 2/1 favourite Toccata Blue in the 8f claiming race while at the same price and over the same distance Time Constraints took the maiden for Michael Halford and Conor Hoban.

The Damian English-trained Red Avenger completed a hat-trick of wins when taking the 8f handicap under Rory Cleary. The 9/2 winner is to be aimed at the All-Weather Championships at Lingfield on Good Friday.

The news was announced by trainer Gordon Elliott, who revealed Don Cossack had suffered a recurrence of a tendon injury first sustained last April.

“We found that he had a bit of heat in his leg on Tuesday and we’ve made the decision to call time,” the trainer said. “It’s a real sickener for his owners Gigginstown, myself, Bryan Cooper and the whole yard.

“We knew it was never certain we would get him back to the racecourse - and even after that to get him back to his best - but we were hopeful and he was on track for a run at Gowran Park next month.

“He’s a horse of a lifetime and he owes us nothing,” Elliott added. “I said all season that if he had any sort of setback   we would not abuse him and retire him straight away.”

Don Cossack won 16 of his 27 starts, including six Grade 1s, and amassed total prize-money of over €1 million.

The entries and weights have been announced for the €100,000 Coral.ie Hurdle and €100,000 Coral.ie Leopardstown Handicap Chase. Tony Martin and Willie Mullins have entered seven horses each for the meeting on January 22.

The €100,000 Coral.ie Leopardstown Handicap Chase has attracted 40 entries and Willie Mullins is responsible for 11 of them, headed by his JLT Novices’ Chase winner Black Hercules who has been given 11st 6lbs.

Another Mullins contender at the top end of the handicap is the Punchestown Festival winner Pleasant Company (14/1) on 10st 12lbs.  Empire Of Dirt (12/1), successful in the race last year, heads the weights on 11st 10lbs. One of 12 horses entered by Gordon Elliott, Empire Of Dirt went on to win the Brown Advisory & Merriebelle Stable Plate Handicap Chase at the Cheltenham festival for Murphy and made a winning start for his current trainer in the Troytown Handicap Chase at Navan in November.