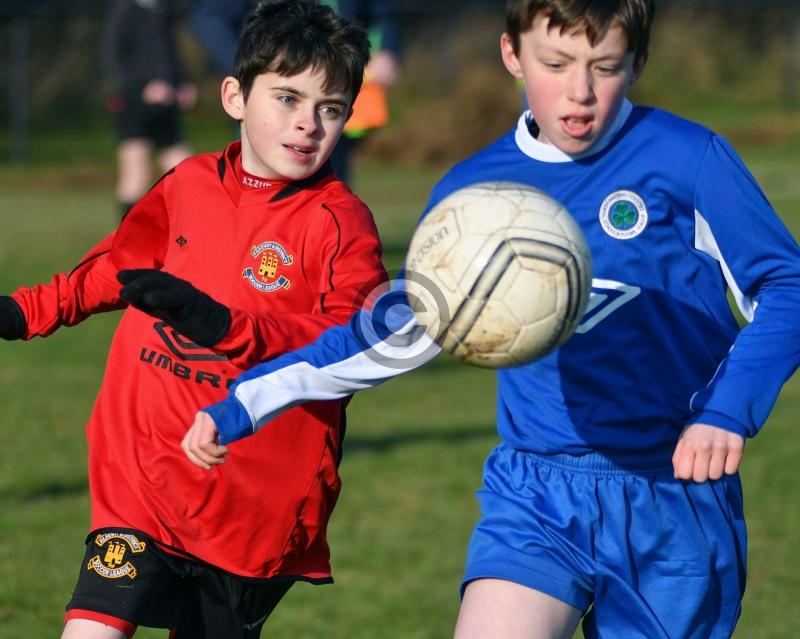 David Fitzpatrick (Kilkenny & DL) in action against the NEC during the inter-league match. Photo: Michael Brophy

They fought like tigers, but Kilkenny’s young Kittens were desperately unlucky to leave Derdimus empty-handed on Sunday.

The visiting North East Counties were made to battle all the way as they earned their second win of the Leinster under-12 inter-league campaign.

Things looked grim for the hosts when they fell 4-1 behind four minutes into the second half after an NEC cross hitting the net after an unfortunate deflection off a Kilkenny defender.

At that stage it looked like the NEC would romp to victory, but the Kittens refused to throw in the towel.

They showed their intentions by hitting back within 60 seconds of conceding. Anthony Ireland Wall did the damage, charging forward on a breakaway and leaving the defence in his wake before coolly slotting the ball beyond the NEC netminder.

The comeback was on!

Kilkenny were just as determined to hit the target from early in the game, going close to opening the scoring inside two minutes. Wall almost created the opener when his second minute corner was flicked on by Tim Kelly, but his looping header was cleared off the line by Tadgh Carthy.

The NEC survived the resulting corner (and a second one, blocking a Tom McPhillips shot) and countered to take the lead. Joe Hannigan charged forward, pausing only to cross the ball in for George Douglas to send a low shot spinning into the net.

The NEC didn’t hang about when it came to attacking again, taking just a minute to double their lead. Excellent work in the middle by Hannigan and Carthy ended with a menacing cross from the left. The ball wriggled away from goalkeeper Oisin O’Reilly, who recovered but couldn't stop Douglas from sliding in to knock in his second goal.

Kilkenny might have been shocked, but made a perfect reply. Harry Cummins carved the NEC defence wide open with a telling ball. Eanna O Casoide read the delivery to perfection, skipping away from Harry O’Connor before ramming home an unstoppable shot.

The Cats stayed on the attack after that, using their pace to trouble the NEC. A clever McPhillips pass put O Casoide clear on 20 minutes, but a telling Carthy tackle denied him a clean strike.

The trouble was that the NEC were just as sharp up front, proving as much when Calum Bonner made it 3-1 on the half hour, finishing from close range after a free bounced his way.

The goal was a body blow for the Cats, who were within seconds of going in at half-time with just one goal between the sides. Nevertheless they showed their intentions were to fight on, Aaron McEvoy sending Darragh Heffernan scampering across his line when he fired in an injury-time free-kick that whistled a fraction beyond the far corner of the NEC net.

Kilkenny were quick to pick up their attacking play again after the restart. They almost made the perfect start to the second half, Anthony Ireland Wall got on the end of Aaron McEvoy’s 33rd minute corner, but his header flew over the bar.

That was a let-off for the NEC, who knew they had to act on that escape. They did just that from the resulting move, getting a touch of good fortune when that fourth goal hit the net.

Led by Anthony Ireland Wall, Kilkenny’s response was emphatic. The youngster grabbed his second goal within a minute of Kilkenny going 4-1 down, then continued to charge forward in search of more.

The quest paid off as, within 10 minutes of going 4-1 down, the Kittens had pulled the deficit back to just one goal!

Dashing along the right, Eanna O Casoide ran at the NEC defence. Given time and space he delivered a great cross for Ireland Wall, who won a battle for possession with the goalkeeper before slotting the ball home to complete his hat-trick.

The goal was a real high point for Kilkenny and Ireland Wall in particular, but try as they might the Kittens couldn’t find a fourth finish to level the game.

Spurred on by Billy Wall, who scrapped and fought for every ball, Kilkenny tried their hardest to get another goal. Jake Coyne and O Casoide had chances in quick succession when Kilkenny poured into the NEC box, but saw their efforts blocked as the visitors held out for the final whistle.