It was a messy affair, but 'Shock get job done 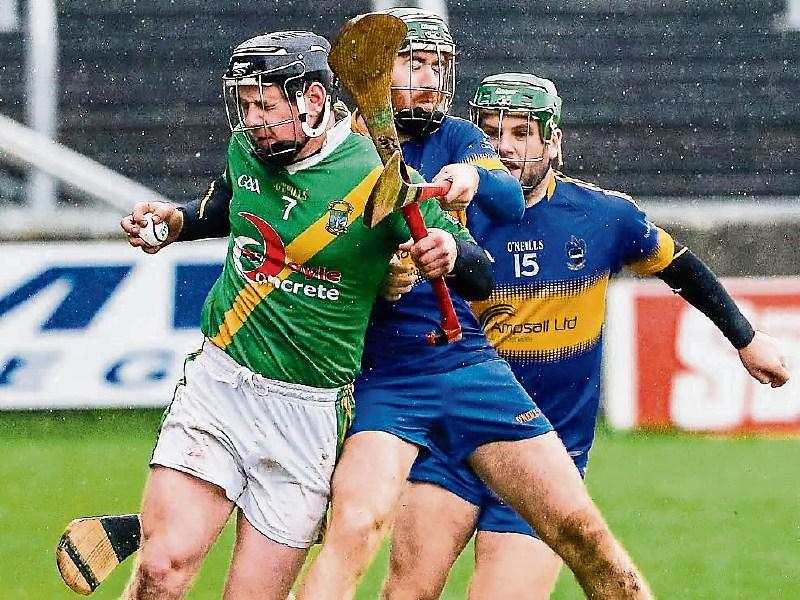 Niall Tennyson (Carrickshock) has the advantage in this clash during the IHC club semi-final.

The best and crucial thing was that Carrickshock claimed a place in the All-Ireland club intermediate hurling final in Croke Park.

There they will do battle with Ahascragh/Fohenagh (Galway) on Saturday, February 18. Winning through to the final was the No. 1 priority before this semi-final in Portlaoise on Sunday, so it was mission accomplished after a game that was hard to classify.

Opponents Robert Emmetts (London) looked a decent enough outfit, even if it was obvious from early on that they weren’t as cute or as neat of touch as the opposition. But when they had two players sent off during the first half they were left without any hope of causing an upset.

What was ref doing?

On the other side of the coin, Carrickshock were left without a gut bursting effort in preparation for the big decider, and now  they must  plan for that in other ways.

“I don’t know what the referee was doing at times during the first half,” admitted Robert Emmetts manager, Kevin McMullan afterwards. “The second sending off was very harsh, and then the referee gave us a lot of frees in the second half.

“Look, we have no complaints with Carrickshock. They were the better team, but the sendings off hurt us.”

Referee Johnny Murphy (Limerick) looked a bit fussy from the off. The first dismissal, of Conor Walsh in the 24th minute, was cut-and-dried  consequence of a loose and dangerous pull with the hurley across John Power.

The second in the 27th minute was harsh on sub Kieran Morrissey, whose foul wasn’t of the dangerous or rough variety.

In fairness to the match official, a bit of indiscipline was creeping into ’Emmetts play at that time, and they had already conceded five points from frees to leave the score at 0-10 to 0-1.

Some of the ’Emmetts fans were far from pleased with the referee, and at least one made his way to the tunnel at half-time to make his feelings known to Mr Murphy in no uncertain manner.

Anyway, the game was all but over that  time. Carrickshock led by 0-13 to 0-1. There was no way they were going to surrender that lead.

They never looked troubled afterwards, even after they took off Richie Power in the 41st minute - he started his first match in  bout 18  months - so he wouldn’t overdo things, and Michael Rice shortly afterwards.

The winners played some lovely hurling, knitting nice plays together, keeping things simple and using the ball intelligently. A typical example came in the 42nd minute.

Goalie Jamie Power drilled a puck-out from the town end towards the left of midfield. Michael Rice swept the ball on with a tennis like overhead strike on the sliotar with his hurley. John Butler snapped up the ball, and hit the target from 45 metres.

From goalie’s hand to between the opposing uprights took no more than a few seconds. A lovely play, which left the score at 0-18 to 0-4.

Michael Rice had the right recipe for what was a wet, cold and miserable day on a greasy pitch - get the ball and delivery it away, promptly.

The purists say hurling is at its most beautiful when kept simple. Rice would understand.

Richie Power was hugely effective in making plays; spreading the ball around with accuracy and intent. John Cahill was strong and determined, and he climbed another rung in his personal bid to get better and better.

Hugely impressive too were Damien Walsh and Mark O’Dwyer, especially in the second half, when they really put themselves about, and in the way of hardship too if required, for the sake of the team.

John Butler, who received a late call in to the first XV, had a most profitable afternoon as he helped himself to three scores. Kevin Farrell too had every reason to be pleased with his contribution.

The defence never really came under much pressure, such was the good covering work done by the forwards and midfield, and, of course, ’Emmetts difficulty coping with a shortage of numbers.

“We did what we had to do,” was the way Carrickshock selector, Pat Fennelly described things. “Now we have a shot at the All-Ireland.”

Carrickshock didn’t mess about. Richie Power marked his return by firing over a point in the second minute, almost from the right sideline and 45 metres range.

A quick brace of converted frees from Kevin Farrell reflected their early dominance.

Efforts from John Butler, a score made by John Power, who then proceeded to shoot one himself, left Carrickshock 0-5 to no score clear on eight minutes.

The losers landed the next score, a point from a free by Eoin Chawke, but that drew an instant reply from Damien Walsh, with a lovely assist from Kevin Farrell.

On things charged, interrupted for the two dismissals, as Carrickshock build up a good half-time lead of 0-13 to 0-1.

As a matter of interest, I had the frees count at 7-6 to the winners during that half. The call count changed dramatically afterwards, with ’Emmetts getting 11 against two, if my figures are right.

Within 52 seconds of the restart the referee awarded ’Emmetts - rightly - a free which drew a jeer from the London support. Eoin Chawke pointed.

Within seconds Damien Walsh wriggled through the cover at the other end, and looked sure to score a goal, but the ’keeper Sean Ryan turned his sizzling shot over the bar.

A long delivery from John Cahill was then missed by two defenders, and Walsh whipped over another minor. A third from sub Darragh Brennan upped the divide to 0-16 to 0-2.

There was no hope for ’Emmetts after that. Midfielder Tomás Lawrence put in a couple of determined runs, while Tadhg Healy, Paul Horkan and Stephen Griffey were as defiant as they could be. Free-taker Eoin Chawke converted frees well.

The losers scored a goal in 52nd minute through Cathal Kehoe, when a long free from Chawke broke 12 metres to the right of the target to offer the chance. That left the score at 0-18 to 1-7.

There was no panic. Carrickshock knew what they were about!