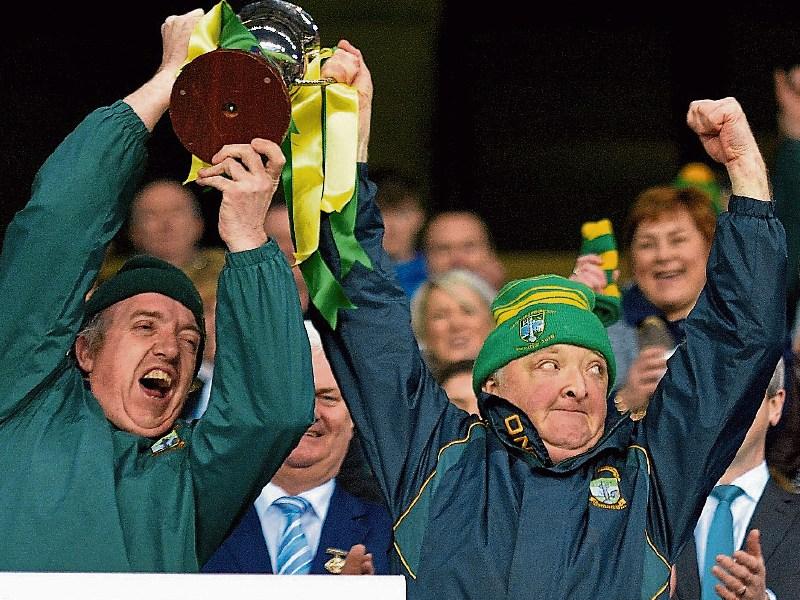 The 'Water Boys' were invited to become the 'Cheer Leaders' when Carrickshock painted Croke Park green and gold following their All-Ireland victory.

Team captain, John Tennyson, the former Kilkenny star, stood back from lifting the winners trophy in victory salute on the steps of the Hogan Stand following their big win over Galway champions, Ahascragh Fohenagh in the All-Ireland intermediate club hurling final.

Throughout his victory address, Tennyson kept one hand on the trophy, but when it came to raising the cup to salute Carrickshock's stunning 2-15 to 0-6 success he stood back and invited club loyalists, Gary Comerford (45) and Jim Rohan (44) to do the honours.

The life-long friends and 'Water Boys' with the squad were standing on the steps of the stand in the middle of the Carricshock players, and with GAA President, Aogán ó Fearghail, looking on approvingly, the pair made their way to the presentation area.

Together Jim and Gary lifted the trophy in the air to mark the making of history for a club that won the Kilkenny senior championship seven times, the last in 1951. Cue mayhem!

"They represent the heart and soul of Carrickshock," Tennyson insisted.