Tombstone too good for Jezki in Red Mills Hurdle 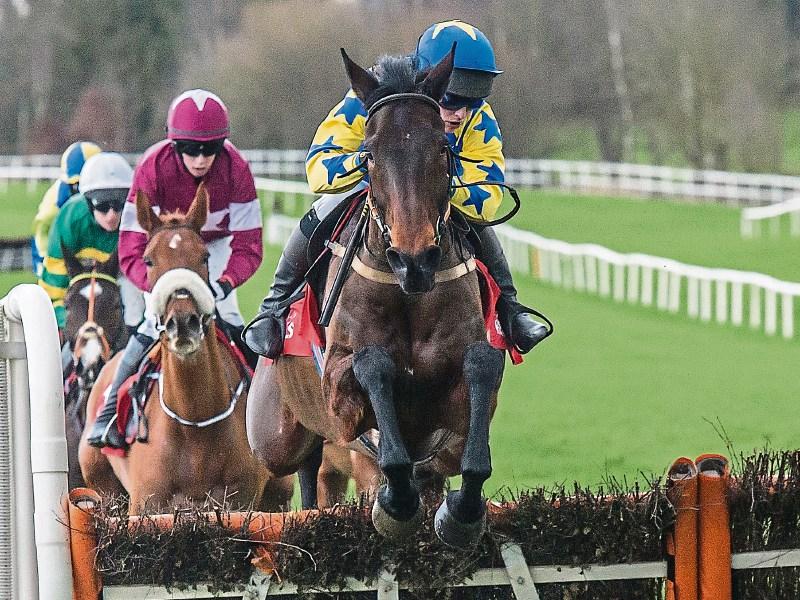 Action from the Connolly Red Mills Day at Gowran Park

Gowran Park was home to an upset on Saturday as the Jessica Harrington-trained Jezki was pipped to the Red Mills Hurdle (Grade Three) spoils by Tombstone.

The 2/5 favourite was tipped for glory but couldn’t cope with the 9/4 challenger from early in the straight. In the end Jezki to settle for second place, four lengths adrift of the winner.

Jezki’s trainer was not overly disappointed with the outcome stating, that her charge could not handle the testing ground. She was unable to shed any light on whether he would go for another tilt at the Champion Hurdle (a race he won in 2014) or the Stayers’ Hurdle at the Cheltenham Festival next month.

This was a fine effort by Tombstone, who looks likely to take high rank over fences next season. He has plenty of options to choose from according to his trainer Gordon Elliott. The race marked a welcome return for jockey Bryan Cooper, who scored a big race win on his first day back after breaking his pelvis more than a month ago.

Jockey Richie Deegan had a memorable end to the meeting as he partnered the concluding two winners. He first partnered Mine Now (7/1) to a narrow victory in an incident-packed 2½ mile handicap hurdle for trainer Peter Fahey before partnering the Pat Fahy-trained Shimmer’s Rock to success in the bumper.

Shimmer’s Rock (5/1) is a half-sister to the extremely talented The New One, and was an especially poignant success for trainer Pat Fahey as this race was named in honour of Ronan Lawlor, an employee of the yard who was tragically killed in a riding accident in 2010.

Navan has been a happy hunting ground for trainer Gordon Elliott this season and he was once again in flying form on Sunday as the local stable recorded a fine treble during the course of the afternoon.

The highlight of the trio was the fine performance of the exciting Sutton Place (4/6 fav) as he landed the Ladbrokes Ireland Boyne Hurdle (Grade Two) in the hands of Barry Geraghty.

While he appeared to be in trouble early in the straight, Sutton Place found plenty for pressure from before the final flight to reel in stablemate De Plotting Shed and score by over three lengths at the line.

After the race Elliott appeared to rule out next month’s Cheltenham Festival for the six-year-old son of Mahler and nominated the Fairyhouse Easter Festival as his next port of call before being sent over fences next season.

Just half an hour earlier, Ball D’Arc (6/4) benefitted from the fall of main market rival Ballyoisin (4/5 fav) at the third last fence to easily account for the only other runner, Tully East, in the Flyingbolt Novice Chase (Grade Three). The treble was completed by newcomer Poli Roi (2/7 fav) in the concluding bumper event, giving jockey Jamie Codd another winner.

The other graded event on the card, the Grade Two Ten Up Novice Chase over three miles, produced an all-the-way success for the Sandra Hughes-trained Acapella Bourgeois (7/2).

Given a very positive front running ride from Roger Loughran, Acapella Bourgeois jumped and galloped his rivals into the ground and had the race in safe keeping from some way out, coming home 32 lengths clear of Road To Respect. The winner is now likely to head for the RSA Chase at Cheltenham next month.

Gillian Callaghan’s Mad Brian (12/1) ran out an easy winner of the Martinstown Opportunity Handicap Hurdle under Danny Hand over two miles and six furlongs before Denise Foster sent out the ex-English trained Miles To Memphis to pull off a shock 25/1 success in the two mile handicap hurdle under a well-judged ride from Mark Enright.

Trainer Joseph O’Brien was the man to follow at Dundalk on Friday night as the Piltown based handler recorded an excellent treble on the eight-race card.

All three winners were each partnered by different riders and it was the promising newcomer, Remember The Days (14/1), who got things started by taking the 8f maiden in the hands of his brother Donnacha.

Former dual champion apprentice Connor King rode Joseph’s second winner on the night when bringing home the well-backed (5/2) Ligeti to land the second division of the mile low grade handicap, while the treble was completed when Wayne Lordan partnered the much improved Song Of Love (5/1) to win the concluding 12 furlong handicap.

Not to be outdone by her brothers, Ana O’Brien started a fine evening for the family when coming late and fast to win the opening sprint handicap on the Johnny Levins-trained Palavicini Run (10/1) by a length and a quarter from the well-backed favourite, Strategic Heights (7/4 fav).

War Room (13/2) has become something of a track specialist and Shane Duffy’s charge recorded a fifth course victory in the first division of the low grade mile handicap to give Jonathan Burke a first-ever flat win.

Noel Meade’s Sheisdiesel (4/1) finally got off the mark in the three-year-old handicap over a mile under a terrific ride from apprentice Oisin Orr. The winner had to weave her way through a wall of horses over a furlong out and only got on top close to home.

Nine-time Champion Jockey Pat Smullen looked an interesting booking for the Tony Martin-trained newcomer, Share The Honour, in the 10 furlong maiden and so it proved as the 9/2 chance recorded a good victory.

The most valuable event of the evening saw a welcome return to form for Togoville (20/1) as he made most of the running under Declan McDonogh to run out a worthy winner of the 6f handicap.

Trained by Armagh based-Georgios Pakidis, Togoville had not managed to win since November 2015 but this success brought his total to the track to six as he kept on strongly to beat Shepherd’s Purse by just over a length.

Leading trainers Willie Mullins and Gordon Elliott were responsible for four of the seven winners at Clonmel on Thursday.

Mullins shared his winners with Ruby Walsh, who enjoyed a fortunate success on 9/10 favourite Kate Appleby Shoes who pounced on a final flight mistake from Awayinthewest to land the mares’ maiden hurdle.

Chambord Du Lys easily justified her odds of 1/4 favourite to take the two mile maiden hurdle, completing the brace for the reigning champions.

Mullins has a battle on his hands to retain his trainers’ championship and his title rival Gordon Elliott enjoyed two winners of his own. Jack Kennedy partnered Runfordave to win the opening Munster Hurdle at odds of 2/9 favourite while Lisa O’Neill was in the saddle as 9/4 chance Monkshood took the bumper.

Seamus Spillane who trains in County Cork sent out Goulane Davina to win the beginners’ chase. Barry Foley partnered the 9/2 winner. Nenagh-based James Grace won the handicap chase, also over fences, with 7/1 shot De Benno who was ridden by Davy Russell while the amateur riders’ handicap hurdle went to 10/1 chance Zipporah who was ridden by Damian Skehan for Cloyne trainer Denise O’Shea.

The death has occurred of John Shortt. The former jump jockey lost his long battle with cancer on his 53rd birthday last Monday. Kilkenny-born Shortt rode close to 400 winners and gained his biggest success when Space Trucker won the Fighting Fifth Hurdle at Newcastle in 1996 for trainer Jessica Harrington.

Ms Harrington led tributes to Shortt, saying: “John rode many winners for me when he came back from England and after he retired he rode out for me and was a terrific help. We’ll all miss him hugely.”