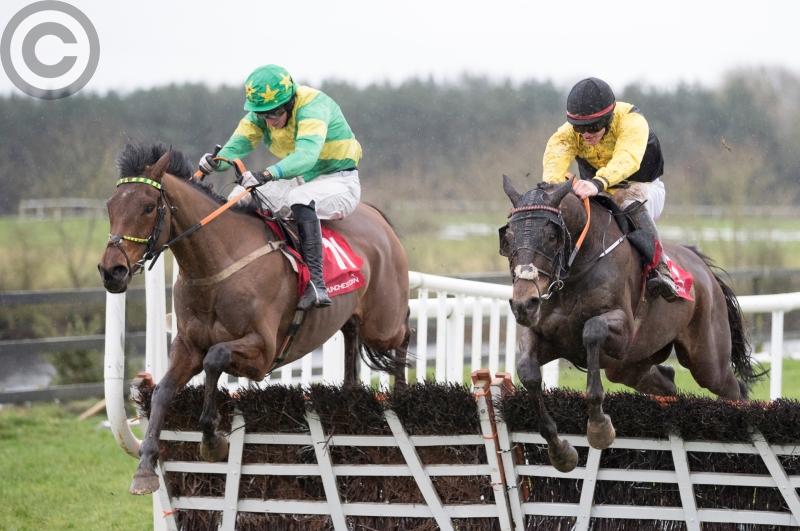 Alisier D’Irlande did what he does best and made all the running, setting a scorching gallop and keeping going after the last to beat Pairofbrowneyes by ten lengths.

In holding Lilshane by a head, Adreamstillalive was completing a hat-trick of handicap hurdle wins. The eight-year-old mare fluffed the final hurdle and appeared to idle in front before sticking her head out when the runner-up came at her.
Morgan and Monbeg Worldwide delivered a first and last race double for Gordon Elliott and Gigginstown House Stud.

Forge Meadow proved to be too good for the boys in the Grade Two Paddy Power Novice Hurdle. The impressive eight-lengths success under Robbie Power earned her a crack at the Grade Two Mares’ Novices Hurdle at Cheltenham.

Left in front when Pravalaguna fell two out, Forge Meadow went clear to beat Joey Sasa and Any Second Now, much to the delight of Jessica Harrington, who was celebrating her 70th birthday on Saturday.

Power went on the complete a big race double as he led Cheltenham Festival possible Edwulf to the Nas Na Riogh Handicap Chase by eight lengths for Joseph O’Brien and JP McManus.

He was halved in price from 14-1 into 7-1 for the National Hunt Chase, a race McManus won last year with Minella Rocco.

Ruby Walsh showed us why many regard him as the best of all time when coaxing Pleasant Company home in the Grade Three Bobbyjo Chase at Fairyhouse on Saturday.

Thunder And Roses, winner of the 2015 Irish Grand National at the track, bounced back to his best and was still a few lengths up on Pleasant Company at the last but Walsh pounced halfway up the run-in and scored by half-a-length - it was beautiful to watch.

Pleasant Company, who was only having his sixth start over fences, is now on course for a crack at the Randox Health Grand National at Aintree. BoyleSports have slashed his odds into 20-1 from 33-1.

There was heartbreak for young trainer Ellmarie Holden, who was denied her first graded win when stewards snatched victory away from her Ex Patriot in the opening Grade Three Winning Fair Juvenile Hurdle and awarded the race to Dinaria Des Obeaux, who had gone down by a head.

Davy Russell, on Ex Patriot, edged across Bryan Cooper and Dinaria Des Obeaux after the second last. Stewards deemed that there was enough interference to reverse the result.

It was a bitter pill for Holden to swallow, but she can be consoled by the fact she has a genuine Fred Winter contender, or possibly even a Triumph Hurdle one.

Jamie Codd completed a double in the final two races on Aupcharlie in the 2m5f hunters chase and Empire Burleque in the bumper.

Pat Kelly won the Pertemps Final in 2016 with Mall Dini and could have the favourite for this year’s renewal after Presenting Percy was cut into as short as 6-1 with bet365 for the race following his smooth success in the 2m4f handicap hurdle.

Davy Russell always had matters under control and only a mistake at the last deprived him of winning by even more. The winning distance at the line was three and a quarter lengths from That’s A Wrap.

The king of Dundalk, Michael Halford ruled supreme on the sand again on Friday night as he recorded a treble in the first three races courtesy of Chestnut Fire, Zinat and Shannon Soul.

Chestnut Fire was subsequently claimed for €20,000 after his easy win in the opening claimer at odds of 8-13.

Zinat was similarly short, at odds of 4-7, and she never looked like getting beaten under Pat Smullen in the Elusive Pimpernel Fillies Maiden. The treble was completed when Shannon Soul belied a terribly slow start to win the featured Anglo Printers Handicap at odds of 4-1.

Beat The Bank made a most impressive winning debut for Darren Bunyan in the Elusive Pimpernel Median Auction Maiden, making all the running under Pat Smullen and scoring by almost three lengths at 4-1.

The Johnny Levins-trained Arlecchino’s Rock, a 10-1 shot, came out on top in a blanket finish to the CBE Handicap under Donagh O’Connor. Course regular Brokopondo was too good in the Monasterboice Inn Apprentice Handicap and completed a double for Levins and O’Connor.

The Grade Three At The Races Michael Purcell Memorial Novice Hurdle at Thurles on Thursday, often a trial for one of the novice hurdles at the Cheltenham Festival, went to the Willie Mullins-trained Tin Soldier.

Somehow Ruby Walsh managed to resuscitate the 100-30 shot, who got up late to beat favourite Moulin A Vent by a length.

There was a massive shock in the Irish Stallion Farms European Breeders Fund Mares Novice Chase as only three of the seven that set out managed to get home.

In the end it was 50-1 outsider Carrigeen Acebo, for the father and daughter duo of Dick and Liz Lalor, who finished best of all to beat Misty Lady by a length and three-quarters.

Westerner Point made every yard of the running on the way to landing the opening Thurles Racecourse Supporters Club Rated Chase for Eoghan O’Grady and Brian O’Connell.

Ellmarie Holden’s Call The Taxie deservedly got off the mark after a string of fine placed efforts in the Killinan Maiden Hurdle under Davy Russell.

Kerry National-winning jockey Lisa O’Neill continued her superb season by guiding the Gordon Elliott-trained Sutton Manon to a four-length success in the Littleton Handicap Hurdle at odds of 9-2.

Clounts Meadows was a 7-1 winner of the Tipperary Ladies Pro/Am Handicap Hurdle, while the widest margin winner of the day was Martello Park in the Irish Stallion Farms European Breeders Fund Mares Flat Race. Patrick Mullins combined with his aunt Mags for a 21-length triumph.

The Listed mares hurdle at Punchestown was the scene for Annie Power’s prep on the way to winning the Champion Hurdle in 2016 - now could lightning strike twice?

Like Annie Power, Limini is trained by Willie Mullins and owned by Rich and Susannah Ricci. She could hardly have been more impressive in disposing of odds-on favourite Apple’s Jade by two lengths.

Ruby Walsh showed his hand last on the 3-1 second favourite but he had all the aces as Limini quickened up smartly to put the race to bed in a few strides.

Limini was slashed into favouritism for the OLBG Mares Hurdle at the Cheltenham Festival afterwards, but Mullins did not rule out supplementing her for the Champion Hurdle. Bookmakers are taking no chances, pricing her between 9-2 and 9-1.

Mullins was fully expected to complete a double in the INH Stallion Owners EBF Maiden Hurdle with 8-11 favourite Castello Sforza but he went down narrowly by a neck to 5-1 shot Mossback, trained by Gordon Elliott and ridden by Bryan Cooper.

Mark Fahey and Ricky Doyle teamed up to take the 2m4f handicap hurdle with 20-1 chance Graphic Legacy, while the 2m6f maiden hurdle went the way of The Green Lady.

Trained by Pat Fahy, the 10-1 shot relished the testing conditions under Danny Mullins and raced eight lengths clear of Freeaway Space after the last.

Perfect Man supplemented his Thurles triumph earlier in the month when winning the 2m6f handicap hurdle, while the concluding bumper was won in impressive fashion by Joseph O’Brien’s newcomer Early Door, who was guided to glory by Patrick Mullins.

Barry Geraghty will miss this year’s Cheltenham Festival. J.P. McManus’s number one was diagnosed with a cracked rib and a punctured lung after a fall at Kempton on Saturday