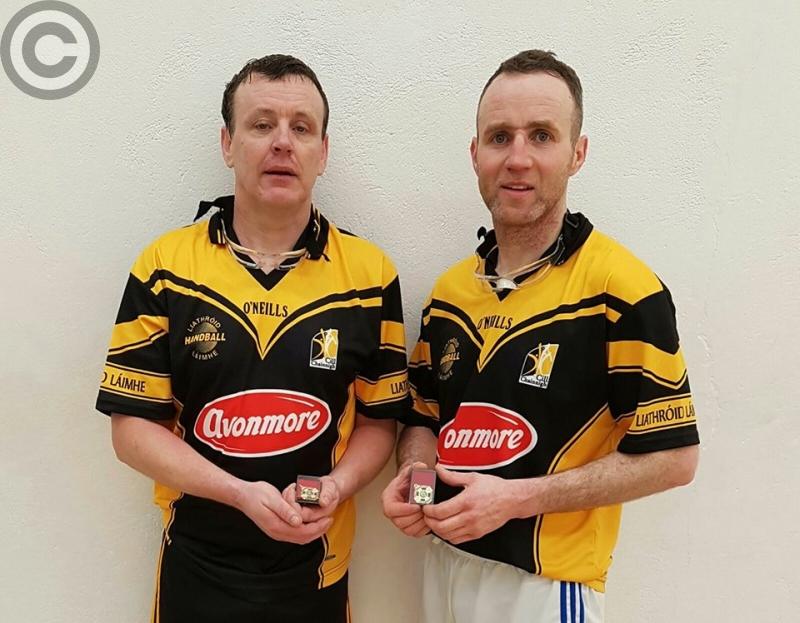 John Morrissey (left) of O'Loughlin's and Noel Doherty, Galmoy who won the Leinster over 35 doubles title.

The weekend was a winning one for Kilkenny handballers who enjoyed huge success in All-Ireland 40x20 semi-finals at juvenile and adult level.
The winners of the Leinster championships faced Connacht at the penultimate stages at adult and juvenile level.
Representing Kilkenny in the prestigious minor singles, Eoin Brennan, Kells, played Diarmuid Mulkerrins in Moycullen in the All-Ireland semi-final. The Kilkenny player produced a fantastic performance, winning 21-9,21-19.
The Kells player has a chance to win his first 40x20 minor title when he plays Tadgh Carroll (Cork) in the All -Ireland final in two weeks in Kingscourt.
There was also All-Ireland semi-final success for Kilkenny in DMBS and SMBS when Joe Anthony (Mullinavat) and Willie Holden (Kilfane) advanced when defeating Sligo and Mayo opponents respectively.
In the Diamond Masters B singles against Michael Murphy (Sligo), Joe won 21-12, 18-21, 21-6. In the decider he plays Brian Stack (Down).
In Silver Masters B, Willie Holden defeated Mayo’s John Coyne 21-16, 21-8. He now plays Michael Clerkin (Monaghan) at the Cavan venue on the St Patrick’s weekend.
Juveniles