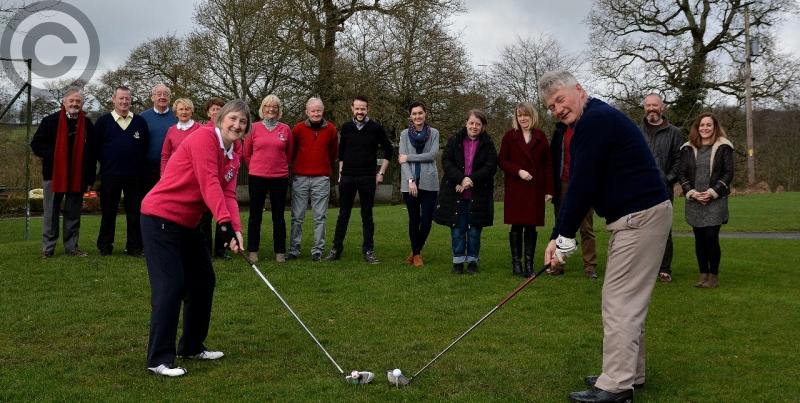 Kilkenny golf club have asked everyone to note that only Full Adult Members are entitled to book time-slots on the Sunday morning competition timesheet before 1pm.
After 1 o’clock the timesheet is open to all categories of members who are entitled to play in the weekend competitions.
Ladies and gentlemen are reminded to exercise care when entering the weekly club singles competitions.
Too many members are inadvertently pressing the wrong entry box (blue for gents; pink for ladies) after swiping their membership card.
The pace of play, especially on Sundays, is coming in for scrutiny too.
The Committee have received a lot of comments in relation to the length of time being taken by some golfers.
The weekend four person team competition on Saturday and Sunday is sponsored by Paddy Raggett Homes
TEAM NEWS: The Barton Cup team kick off Kilkenny’s involvement in the Leinster series of inter-club competitions when they face Borris on Sunday.
Borris have home advantage and will host three matches.
Play commences at 11.30am at both venues. The team and managers would welcome as much support as possible in both venues.
The team comprises of any combination of players with a combined handicap of 14 and will play five foursome matches.
The team will be selected by managers, Liam Cody and PJ O’Reilly from the following panel - Gus Carey, Anthony Cleere, Pat Collins, Paddy Crotty, Frank Dalton, Dermot Doyle, Kieran Hoban, Rob Kearney, Derek O’Gorman, Conor O’Shea, Patrick O’Shea, Brendan Power, Mark Shortall, Tom Sloyan.
COURSENEWS: The ground staff will be doing some slit drainage cuts on fairways nine, 11 an d 12 today (Wednesday) and Thursday.
As a result the Open singles on Wednesday will revert to a 14 hole competition.
Holes 1 to 8 and 13 to 18 will be in play.
As the competition is back to 14 holes, extra lines will be added to the timesheet in the afternoon.
It is expected that all 18 holes will be in play on St Patrick’s Day and over the weekend.
SOCIAL ACTIVITIES: There will be a social night of ceol agus craic in the club on St Patrick’s night.
The evening will kick off at 9pm with music provided by Patsy Dempsey and his group. All are welcome to attend.
BRIDGE: Bridge results Monday, March 6, six t able Howell, 1 Colin Shaw and Collette O’Hare; 2 Terry Harmer and Catherine King; 3 Martin and Jane Duggan, Edith Ogilvie and Ann Kelly.
SNOOKER: Having beaten Roger Ryan, Pat Wall will now play Anthony Cleere in the quarter-finals of the snooker singles.
Tommy Buckley beat Brendan Cleere and he will now play Martin Hanrick in the bottom of the draw in the quarters.
The club still awaits the results of three second round matches before the full line up for the quarter-finals will be known.
RESULTS: Saturday, March 11, gent’s Crosscard, 1 Alan Snype, Pat O’Hanlon, John Burke, Jim Ryan 70pts; 2 Eugene Buckley, Paddy Smee, Maurice Ryan (B), Jerry O’Dwyer 67pts; 3 Jimmy Rhatigan, Liam Cody, Brian Cullen, Dick Curtin 63pts; 4 Dom Murphy, Maurice Ryan, Martin Hanrick 60pts (b6); 5 Brian Keane, Andy Hughes, Mick O’Flynn, Morgan Doyle 60pts.
Weekend, Sunday, Monday, Spring singles, 1 Thomas Comerford (14) 42pts; 2 Sean Murphy (23) 41 pts (b 9); 3 Thomas Barry (14) 41pts; Gross, Graham Nugent (scr) 39 pts (68 gross); 4 Carl Widger (12) 40pts; 5 Jim Kelly (21) 39pts.
The date for the presentation of prizes has yet to be confirmed.
Two’s Club - 5th John Doherty; 6th Brian Meredith, Sean Murphy, Dermot Doyle, Carl Widger, Pat O’Hanlon; 10th John Larkin, Paul Kavanagh; 15th Derek Shelly, David Farragher, Pat McEvoy, Brian Cullen, Seamus O’Neill, John Greene; 17th Aidan Phelan; 18th James Walsh (The Weir).
Each ’Two’ receives €19.75 credit in the Pro Shop.
SENIOR GENTS: There was no competition last week due to maintenance works and course closure caused by the weather.
The next senior gents competition will be played on Thursday.
It will be a 12 hole competition, with holes three to eight and holes 13 to 18 in play.
By leaving out holes one and two, the club will be able to allow buggies out unless there is very bad weather in the meantime.
JUNIORS: Mark Power was back in Spain at the weekend with the Irish boys under-18 team for a challenge match against Spain at the La Manga club.
Playing in the top match in all games, Mark won two of his three matches.
On Saturday morning in the opening foursomes, partnering Sean Enright (Limerick), they won the only match by 3 and 1 as the Irish boys trailed 1-3.
In the afternoon singles Mark was narrowly beaten on the 18th, but he bounced back with a win on the 18th in the final singles on Sunday morning.
Overall, the Irish boys lost the match by 16.5 matches to 3.5 to a very strong Spanish team.
DIARY: Today (Wednesday) 8.36am to 3.48pm ladies and gents 14 hole Open singles competition; Thursday, 9.32 to 10.28am senior ladies, 10.36 to 1.16pm senior gents, 1.32 to 2.20pm members time; Friday, 8.28am to 2.52pm Open 18 hole three person team; Saturday, 7 to 8.52am members time, 9am to 2.51pm Open 18 hole four person team (sponsored by Paddy Raggett Homes); Sunday, 7.36 to 11.21am Open 18 hole four person team (sponsored by Paddy Raggett Homes), 11.30 to 11.57am Barton Cup v Borris, 12.06 to 2.48pm Open 18 hole four person team; Monday, 10.28 to 11.40am Society, 1 to 2.28pm members time; Tuesday, 8.20 to 10.20am ladies 18 hole singles Stableford, 12.20 to 2.20pm ladies 18 hole singles Stableford; Wednesday, March 22, 1to 2.28pm members time.
LADIES CLUB: Results Sunday, March 5, 18 hole singles Stableford, 1 Margaret Duggan (27) 36pts; 2 Imelda Pollack (36) 31pts; best Gross, Mary Leahy Browne (3) 27 gross pts.
SENIORS: There was no seneiors competition last week due to maintenance works and course closure caused by the weather.
The next senior ladies’ competition will be on Thursday.
The draw will be made at 9.30am for immediate tee off.
New Ross
Mixed weather was the story of the fourball competition last weekend.
With 9/10 of the players handicap in vogue there was some excellent scoring nevertheless.
Declan Clark handicap (18) reduced to 16 and Noel Kendrick (18), also reduced to 16, took the honours with a great score of 48 points.

Second with 45 points were Larry Comerford (11), now playing off 10, and Joe Colclough (14), reduced to 13, who had a point to spare over the third placed team.
These were Paul Harrington (8), playing off 7, and Andy Lawlor (11), reduced to 10, with 44 points.
Donal Hosey, competition secretary, has issued a warning to those who put their names on the timesheet for the weekend and then do not turn up. Cancellations should be made before the 6pm deadline on Saturday.
A fine of €7 will shortly be put in place for failure to cancel.
This St Patrick’s weekend a team event, sponsored by the Carpet Gallery, will be played. All prize winners are expected to turn up for the presentations when they have figured among the prizes.
For St Patrick’s night (8pm) joint Captains, Peter Goggin and Marie Therese Wall have assembled a group of artists for the cabaret in the club. All are welcome.
There will be music, song and dance.
The next round of the table quiz will be on Friday, March 23. People can still put in a team (€20).
SENIORS: On a lovely Spring day when players were able to set aside rain gear conditions were perfect for the outing last Thursday.
With hardly a puff of wind and the sun shining, some high scoring was expected. Two teams put daylight between themselves and the pack.
Of course it was on the slick and fast greens that the game was won and lost.

Winners with a superb 96 points were Johnny Watson (16), Richie Aylward (18), P.J. McGrath (19) and Martin Hartley (22).
Second were Hughie O’Connor (18), Noel Dunne (19), Dan Quigley (20) and Tom Furlong (25) with 95 points.
Third on 90 points were Peter Goggin (16), Tony Redmond (18), Billy Redmond (19) and Tony Sexton (24).
Nearest the pin prize on the 11th hole was won by Noel Dunne.
With the big number of players now taking part, people have been reminded that when you pay your entry fee you should check to see your name is on the draw board. That is the player’s responsibility.
The first away outing of the season is at Gowran Park on Monday, March 27. Tee reserved from 10.30am to 12 noon.
Officers will collect the entry fee of €20, which includes provision for extra prizes next Thursday the 16th. The teams will be ready for viewing on Thursday, March 23.
The full co-operation of all in this regard is requested to make the Gowran Park visit a success.
LADIES: Results 18 hole Stableford, March 8, sponsored by French’s pharmacy, New Ross, 1Tess Ryan (22) 37pts; 2 Mary Kavanagh (9) 34pts (b9); 3 Mary Shannon (17) 34pts (b9).
Senior prize - Carmel Delaney.
There is lots of golf time available over the St Patrick’s weekend. Players have been encouraged to get a fourball together to compete on Friday, Saturday or Sunday in an Open competition sponsored by The Carpet Gallery, New Ross. Book online.