Honours even in a game of comebacks! 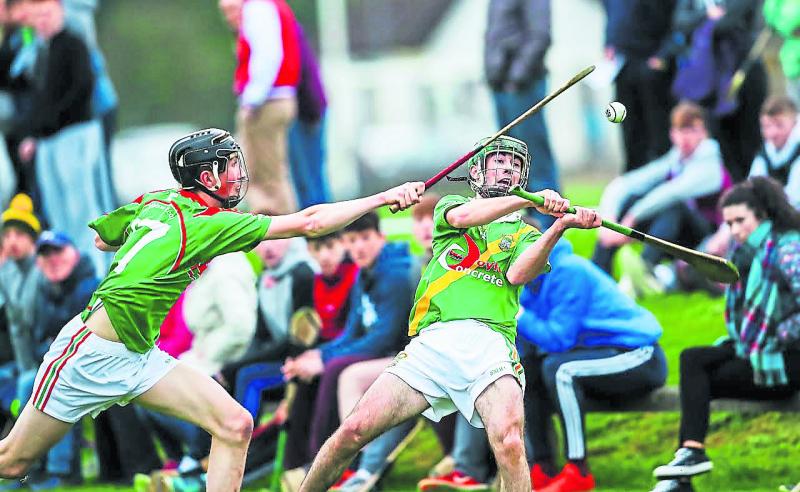 A game of two comebacks saw Carrickshock and the Rower-Inistioge share the senior hurling league spoils after an entertaining battle in Thomastown on Saturday.

The Rower did well to overturn a 0-7 to deficit after 14 minutes, only for Carrickshock to claw back a 1-18 to gap in injury-time. At the final whistle, both teams will have felt like they could have won - but both will be happy they weren’t beaten.

Carrickshock hit their stride from the start and looked the much livelier of the two teams. The Rower had no answer to Carrickshock’s early onslaught when the Hugginstown men scored six points in an 11-minute spell to surge 0-7 to 0-1 ahead the end of the first quarter.

A Kevin Farrell free started the blitz. He added a 65, followed by a lovely Michael Rice score from a tight before Brian O’Donovan added another from 55 yards.

The ’Shock motoring and their fluid hurling reaped further dividends when John Power ran to pick up a long clearance and over a great score. Damien Walsh followed suit, going on a powerful run from midfield to make it 0-7 to 0-1 after 14 minutes.

To give Rower-Inistioge their due, they didn’t panic and worked their way back into the game. Conor Joyce and Tom Murphy combined for the next three points before Kevin Murphy calmly fired home a goal to level the game (0-7 to 1-4).

All appeared to be going Rower-Inistioge’s way until they lost the influential Richie Leahy to injury.

Mark O’Dwyer (C) almost capitalised on the change in tempo when he stole in behind the Rower-Inistioge rearguard on 20 minutes only to be foiled by a great save from Paddy Lyng.

Moments later, Tom Murphy won a great ball 45 yards from the Carrickshock goal and raced forward before being fouled. Conor Joyce slotted the free, 0-7 to 1-5 after 21 minutes.

The sides continued to trade points but the Rower ended the half strongly. Pat Lyng did very well to get onto a breaking ball and fired over from 40 yards before Tom Murphy nabbed a well-taken point (0-9 to 1-8).

Carrickshock started the second half sharply, landing the first four points of the half through Mark O’Dwyer (2), Kevin Farrell and Darragh Brennan, but the Rower’s cause wasn’t helped by the loss of Sean Cummins to injury.

Conor Joyce stemmed the flow when he pointed a free from 50 yards, but Carrickshock hit back when John Power picked out Brian O’Donovan with a lovely diagonal pass. He made no mistake, pushing his side 0-14 to 1-9 ahead after 43 minutes.

Jamie Power in the Carrickshock goal had to be alert to deflect a shot from Kevin Murphy from 15 yards, 0-14 to 1-10. Conor Joyce then pointed a free he had won himself to level things up after 45 minutes, 0-14 to 1-11. Kevin Farrell picked out Eanna Martin who galloped down the before pointing brilliantly from 35 yards out to edge Carrickshock ahead in what was becoming an increasingly tense affair (0-15 to 1-11).

Rower-Inistioge kicked for home with 12 minutes to go when they landed the next three scores of the game. Kevin Murphy picked off a lovely score before the very impressive Ciarán Ryan (R-I) fired over from the middle of the field. Conor Joyce stretched the Rower-Inistioge lead to two (1-14 to 0-15) when he pointed a 30-yard free on 52 minutes.

While Kevin Farrell pulled a point back for Carrickshock Pat Lyng’s growing influence yielded points in the 54th and 56th minutes to extend the Rower advantage to three. When Ciarán Ryan collected a beautiful stick pass from John James Kenny and scored, it was enough to push the Rower into a four-point lead with time running out (0-16 to 1-17).

Kevin Farrell pointed brilliantly from a 25 yard free, tight to the sideline, cutting the gap to three, but Ciarán Ryan looked to have settled things when he stretched the Inistioge advantage to four at the end of normal time (1-18 to 0-17).

However, Carrickshock showed the kind of spirit that recently yielded them a club All-Ireland title when Mark O’Dwyer in the 61st minute with a great ground stroke from 10 yards. More drama was to follow when John Power raced through and looked set to goal, only for netminder Paddy Lyng to deflect his shot out for a 65.

Given the quality of his free-taking all evening, no-one in the large crowd was in any doubt that Kevin Farrell would slot over the 65 to seal an entertaining draw.