They journeyed into the West to score big national wins 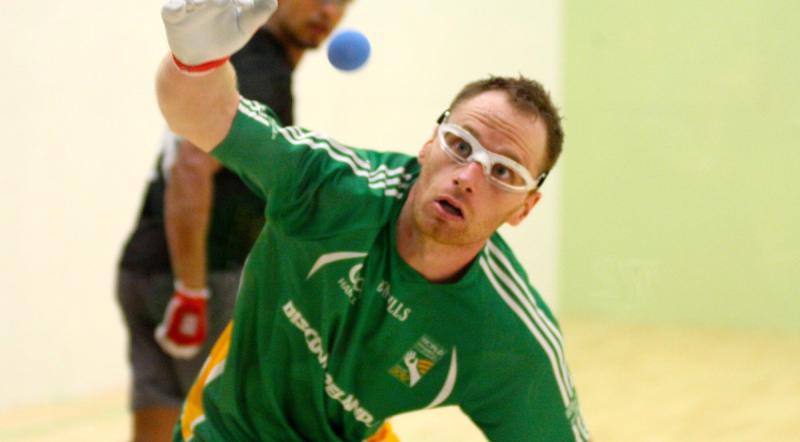 Last weekend the junior 40x20 national handball championships were played in Galway and there were big entries in almost all grades.
These competitions have been very well supported over the years, and they give a good indication of the growing interest in the sport.
From a local point of view a strong contingent of players travelled West, and they enjoyed considerable success.
Some who travelled would be relatively new to this type of competition, and this was a great opportunity to experience the challenge.
Kilkenny reached four finals; boys 13 and under A and B, boys 17 and under and girls 17 and under.
In the boys 17 and under final, Eoin Brennan made no mistake when defeating all comers to record a great victory.
In the semi-finals the Kells players renewed rivalry with Dara Keane, Kerry, a player who had beaten him in last year’s 60x30 All-Ireland under-16 singles semi-final.
This time the Kilkenny player came out on top, winning 15-4, 15-1.
In the final Eoin continued where he left off in the semi, dominating from the start. He was a comfortable winner over Cian O’Driscoll(Cork), 15-9, 15-9.
This was some consolation for the Kells player as he lost the All-Ireland minor singles decider a few weeks ago.
There were high hopes in boys 13 and under with Kyle Jordan (Kilfane) contesting the decider against Mark Doyle from Wexford). However, the Slaneysider won 15-3, 15-8.
Also in this grade, Daniel Hanrahan (Galmoy) reached the semi-final where he lost out to Doyle, 15-4, 15-1.
In the boys 13 and under B grade, John Doheny, Galmoy came through a large field - 58 entries - to see off Kaelan Murphy (Cork), 15-9, 13-15, 11-5 to record his first victory in this competition.
On his way to the final John beat Harry Delaney (Kells) in the semi-finals.
Earlier in the season John was part of the successful All-Ireland winning boys under-14/15 team.
Also a semi-finalist in Galway was Jack Doyle (Windgap). He came out a 15-7, 15-6 loser to Lorcan McBride (Tyrone) in what was a very strong boys 15 and under grade.
In the girls championships, Mary Ellen Phelan (Galmoy) came through some tough tests to reach the final of the girls 17 and under grade.
Here she faced the hugely impressive Megan McCann (Armagh), who proved a step too far for the North Kilkenny player.
McCann won in two games 15-2, 15-0.
Mary Ellen played excellently all weekend and will be a better player from this experience.
Clogh’s Lauren Power was a runner-up in the girls 13 and under Plate event.
Hardball and One Wall
Now that the 40x20 season has ended the emphasis over the next few weeks will be on hardball and One Wall competitions.
The oldest form of handball, hardball has enjoyed a resurgence in recent years, particularly among young players.
Most championships are well contested, with quite a number of the young players using strokes normally associated with 40 x 20 to good advantage.
The One Wall season will commence in the coming weeks with tournaments scheduled across the country, culminating in the national One Wall championships in Breaffy House, Mayo in early July