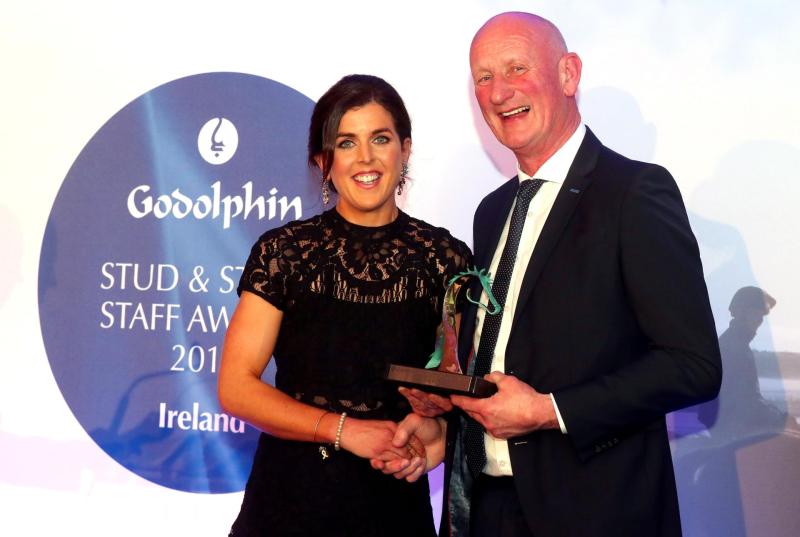 Elaine O’Donovan, Head Girl at Eoin Griffin’s training yard in Slieverue, County Kilkenny, and Adrian Taylor, Assistant Trainer for Jim Bolger were among ten winners at the Godolphin Stud and Stable Staff Awards at the Newpark Hotel, Kilkenny.
Elaine, who has been Head Girl for Eoin Griffin since 2007, won the Horse Care Award. Despite not coming from a racing background, Elaine leads by example and the welfare of the horses under her care is first and foremost.
Elaine has also completed many night courses in RACE which has greatly improved her knowledge of horses, and greatly benefitted the yard.
After receiving her award, Elaine commented: “It was a fantastic evening to be there. To be nominated was an honour. To win was just such a fantastic feeling.
"My mam and dad are not involved in racing and couldn’t get over the warmth of the people in the room.”
Elaine received a cash prize of €5,000, a trophy plus a further €3,000 to be shared among the team at Eoin Griffins.
Adrian Taylor, Assistant Trainer for Jim Bolger, took the prestigious In The Saddle Award. Adrian came to Ireland from South Africa in 1984 for three months work experience in Coolcullen and 33 years later he is still there.
Adrian has played a pivotal role in the success of many horses including champions such as New Approach, Teofilo, Dawn Approach, Lush Lashes and Alexander Goldrun.