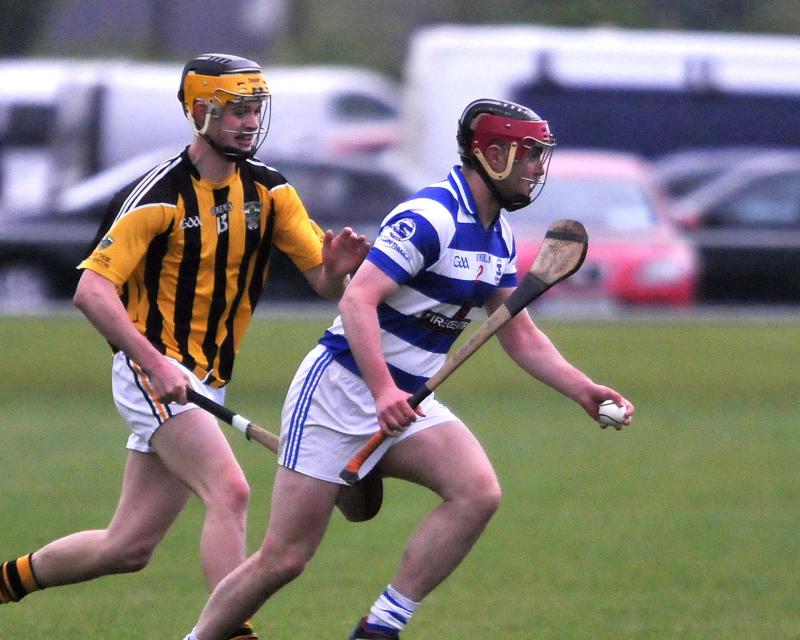 Martin Phelan (right) was one of the stars for Lisdowney

Lisdowney battled all the way, and it wasn't until Rory Hickey banged home a goal in the 62nd minute that they were absolutely sure they had claimed their first win of the season in the intermediate hurling league.
This clash in wet Thomastown was fiercely fought from start to finish, but in the end junior champion, Mooncoin, were left with nothing as they look for their first points following promotion.
The winners would have goaled in the opening minute, but first a post deprived them and then Mooncoin goalie, Eoin Purcell, brought off a smart save. In the minutes that followed one of the Mooncoin stars, Alan Walsh, and Conor O'Carroll traded points to set the trend for the rest of the match.
The scores were level six times during the half, including at the break when it was 0-7 each. In terms of chances, Lisdowney were the more threatening, and along with the early opportunity Pat O'Carroll was unlucky with an effort for a goal in the 18th minute.
The losers opened strongly in the new half and points from Alan Walsh and James Delahunty gave them the advantage (0-9 to 0-7), but they were hauled back quickly.
The scores were level four times in this period before Lisdowney made a break for the winning line when Aaron Fogarty converted a good free in the 54th minute (0-17 to 0-16). The finish was tight, very tight but Hickey decided it with his late goal.
SCORERS: Lisdowney - A. Fogarty (0-7); R. Hickey (1-2); M. Kenny (0-4); W. Kenny (0-2); V. Fitzpatrick, P. O'Carroll, C. O'Carroll (0-1 each). Mooncoin - K. Crowley (0-5); A. Walsh (0-4); E. Hennebry, M. Grace (0-2 each); J. Fitzgerald, J. Delahunty, M. Fitzgerald (0-1 each).