The championship brings out the edge, and Kilkenny have it 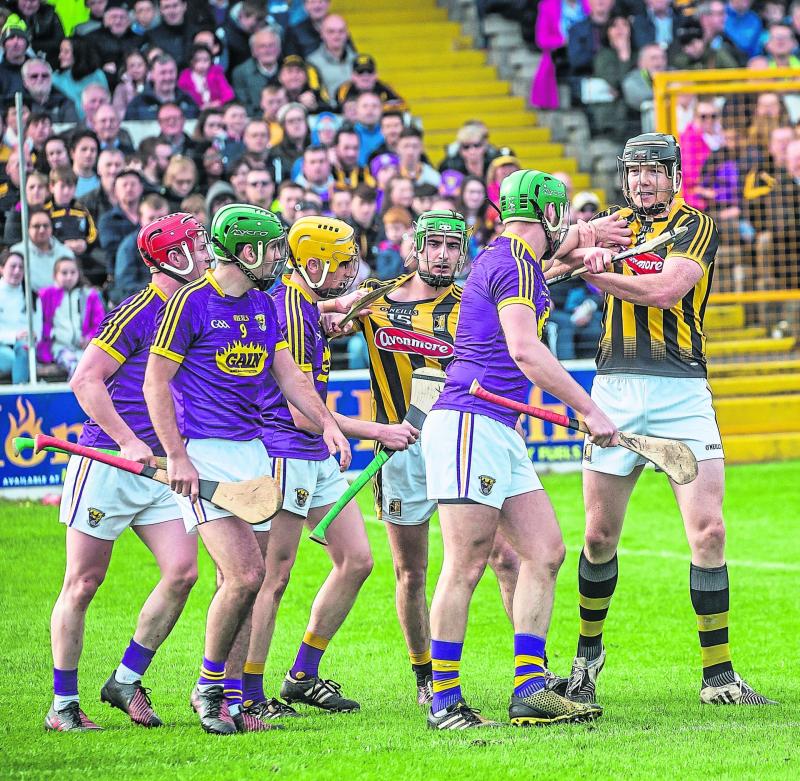 HOLD ON THERE: Walter Walsh (Kilkenny) and some Wexford players get up close and personal during the National League quarter-final

It seems like only a short time ago we were all part of the scramble looking for tickets for the All-Ireland hurling final against Tipperary, and now we are looking forward to travelling another championship road, starting against Wexford in Wexford Park on Saturday.
There is more excitement about this match than for any Kilkenny/Wexford clash for a long, long time.
The generation of such excitement is great for hurling, not just this match. Kilkenny will probably go in as strong favourites, based on history as much as recent form.
However, Wexford people genuinely believe their team under Davy Fitzgerald has a better chance than they have had for ages.
The only thing Kilkenny will be looking for is a win. This game is not about performance.
Wexford are getting something big together. They have enjoyed decent success at under-21 level.
Lee Chin, Conor McDonald, Liam Ryan, Matthew O’Hanlon and so on are becoming big, familiar names, the likes of which Wexford wouldn’t have had in recent times.
They would have had great hurlers in that time, but they haven’t enjoy the success that would put the names of their players out there. Things could be on the turn for the county.
The reality for Wexford is that this match, the championship, is going to be a step up in class from anything else they have experienced this season. They did well in the League. They won Division 1B.
They beat Kilkenny in Nowlan Park and they played very well against Tipperary in the League semi-final for 60 minutes or so. That was all positive, but the championship will bring a new level of play, of competition.
Any lad who has played at inter-county level has found that when it comes to the championship things are different.
I found that in my own career. In 2008 I had a very good League campaign. Then in the first round of the championship I only did okay. I ended up not playing in the rest of the championship.
The League and championship are worlds apart. The championship is a different animal.
No one holds back. It is 100% for every second of every game. No stone is left unturned in terms of planning or preparations.
Lads who might have a slight niggle will be played. This is all or nothing time.
The atmosphere in Wexford Park will be absolutely electric. Any time I played there I really enjoyed it. The crowd is close to the pitch. Wexford people really get behind their team.
It might seem unusual to suggest as much, but the electric atmosphere can drive on the Kilkenny players as well. I think it will.
The venue shouldn’t be a factor. Personally it never bothered me whether you were playing at home or away. You are playing for Kilkenny. The goal was to finish on the winning team.
Once the action starts, no one has time to think about where they are. The mind can’t stray to things like the crowd. It just can’t!
No one knows the shape the Kilkenny team will take, but having people questioning Kilkenny will be a driving force too. The players will be out to show how good they are, all of them.
Eoin Murphy, Paul Murphy, Cillian Buckley, Conor Fogarty, at wing back or midfield, T.J. Reid, Colin Fennelly, Richie Hogan, Michael Fennelly, Ger Aylward (if fully fit), Walter Walsh, Colin Fennelly will all start.
There are a number of positions up for grabs, No. 3 and No. 6 especially. Jason Cleere did well in the League, but I am sure Kieran Joyce is mad keen to get back. Joey Holden will be driving hard and Shane Prendergast will be in the shake up too.
When you start naming the Kilkenny players you appreciate the strength of the panel, and that automatically gives me more confidence that the job can be done.
There is massive hype in Wexford, but that won’t bother the Kilkenny players.
You don’t get involved in much outside your preparations. You don’t take much notice of what is going on in the media; what is going on in the opposing camp or other places.
The week of the match is all about the head, about your focus. If Kilkenny were to be watching things in the other county it would be a distraction.
The vast majority of the Kilkenny players have played in front of 80,000 people in All-Ireland finals. That experience of that will stand to them in Wexford Park.
Wexford showed their hand in the League quarter-final. They can’t have any more surprises in terms of tactics, or their formation. The Kilkenny players will have chatted about what happened that day; the difficulty they had coping with the extra defender and they will try and work things out for themselves about what to do if similar situations arise again.
I don’t think Kilkenny would have put massive preparation into how they tackled Wexford’s game plan in the League.
Kilkenny are going into this game with something to prove. There was talk after the All-Ireland final defeat that this, that or the other thing was wrong. Now you have the hype surrounding Davy Fitzgerald and Wexford. To me, all that sort of talk will add an edge to Kilkenny.
Kilkenny will be massively competition. They will be as they have been since Cody arrived - massively competitive; chasing, chasing; hunting, hunting. There will be an edge, a sharpness to their play that will be a mile above what was seen in the League quarter-final.
The championship is a different animal, and it makes a different animal of players too. There will be a different, harder edge to Kilkenny in and I think they have what it takes to win.