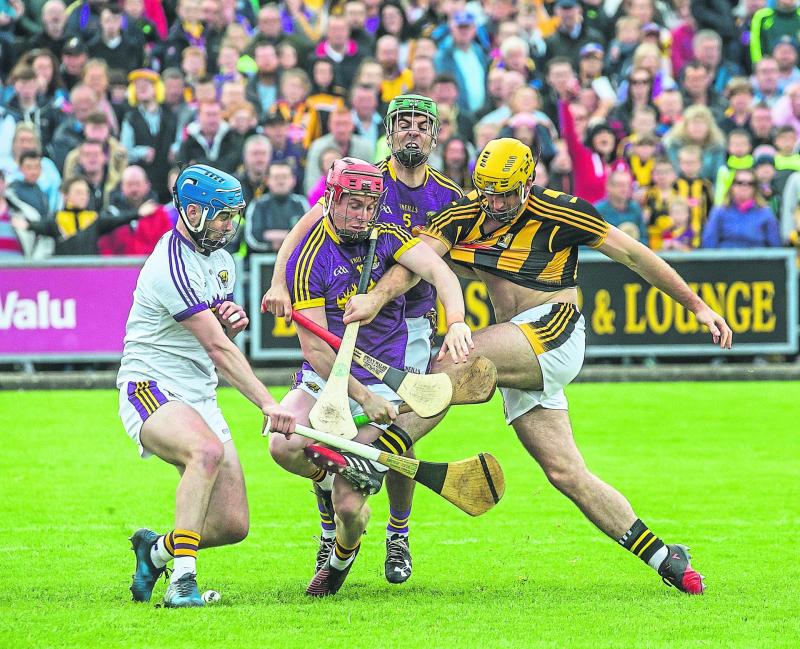 Those of us in the press box at Wexford Park on Saturday night were treated like royalty.
There were plates of sweets placed at intervals along the ledge of the box, which runs for miles. A nice lady asked me how many sugars I wanted in my tea (for the record, half a spoon) and at half-time came along with said tea, sandwiches and buns. The stewards and officials couldn’t have been more helpful or accommodating.
All of which is a strange and - yes - self-indulgent way of beginning an article, but hang in there. There’s a moral to the tale. We’ll finish where we started.
The match itself? The atmosphere was fabulous and Wexford were terrific, with Lee Chin by some distance the man of the match.
He was the most important and influential player on the field, the one who turned the key in the winners’ ignition, and he did so by laying off as much ball as he took on. Sometimes a player does his bit by not trying to be a hero all the time. So it was with Chin.
One doesn’t have to be a fan of Davy Fitz, and possibly some readers won’t be, to give the man due and dispassionate credit. No fewer than three Wexford defenders scored on Saturday, evidence of a gameplan drawn up with precision and worked on exhaustively. Older Kilkenny folk, incidentally, may have taken a tinge of quiet pleasure from the sight of their full-back Liam Ryan - impeccable Clara heritage there, albeit via Enniscorthy - being one of them.
No Room For Argument
The stats left no room for argument. The winners hit 21 scores to their opponents’ 14 and 20 points to their opponents’ 11.
This was the poorest Kilkenny championship performance of the Cody era and the poorest Kilkenny championship XV of the Cody era. And both of those things are relative, of course, given that the highs of the Cody era have been so high and the teams so stupendously good, and both of them are entirely understandable, given the quantity and quality of the players who’ve departed the panel over the past three seasons.
Kilkenny’s bottom line in Wexford Park wasn’t anybody’s fault. It categorically wasn’t Brian Cody’s fault. It was simply the point where the cycle has left Kilkenny. It’s to the manager’s credit, indeed, that the evil day has been delayed so long.
There was no match intelligence up front in the second half. There was precious little leadership apart from that provided by Colin Fennelly and TJ Reid. But how could there be in view of the wealth of corporate intelligence lost to the county of late?
Would things have been different had, say, Eoin Larkin and Richie Power been there? Of course. But they weren’t, end of story. We are where we are.
The visitors handled Wexford’s gameplan, which by its nature is more effective against a wind – because there’s more room for the runners – than with it, perfectly well in the first half. They got the bodies up the field and released shot after shot. Unfortunately nine of them were wides.
They handled it appallingly badly in the second half.
There was no mystery about what needed to be done. Negate Wexford’s extra defender by lining up the shooters 50 metres out. Work the sliotar to them and let the wind do the rest.
Instead Richie Hogan played far too deep and Kilkenny proceeded to dump ball after ball on top of an outnumbered Fennelly. He did brilliantly to achieve as much as he did. But he couldn’t win the match by himself and he shouldn’t have been made to try. The losers’ total of four points from play tells its own sorry story.
As ever it’s easy to be wise after the event. In real time there was no arguing with the decision to withdraw Padraig Walsh (three wides) and Ger Aylward (four wides and on a yellow card) before half-time.
In hindsight one wonders if it wouldn’t have been better to persist with one or other for five or ten minutes into the second half, if only because they were at least getting on the ball and asking questions of the Wexford defence.
That, however, was far from the losing of the match. The inquest should centre on the losers’ second-half approach. They knew what to expect from their hosts - and walked in with their eyes open nonetheless.
To finish where we started, with the stewards and officials at Wexford Park. Granted, it was only a small thing. Yet get the small things right and chances are the big things will take care of themselves.
Helpful stewarding suggests a well organised and enterprising county board, with obvious on-field implications. (On which point, the national media love covering games in Nowlan Park because they’re treated with respect.) Wexford Park on Saturday night was full of decent, helpful, enthusiastic people, and that was reflected on the pitch.
It was a great occasion. Great for Wexford. Great for hurling. And a pleasure to be there.