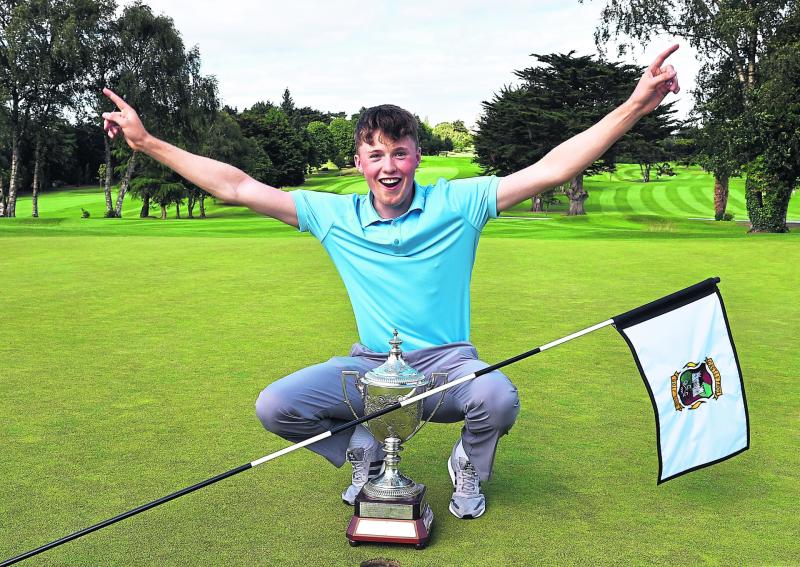 Teenage sensation Mark Power hopes to carve out a career in golf when he finishes school.
The Kilkenny golf club member proved himself to be one of the hottest young prospects in these island when he scored a remarkable second win in the Irish Boys Amateur Open Championship.
The 17-year-old holed out for an eagle at the end of a three hole playoff against England’s Jack Cope when he retained the title at Castletroy on Friday.
“It was probably the best shot I ever hit,” Mark suggested after he holed out from 129 yards to snatch victory from Cope, who looked set to finish with a birdie.
“I knew it was a do or die shot,” added Mark, who carded a final round of 70, the best of the day, to force a three hole playoff.
Power gained the advantage by shooting a birdie four on the 16th, the first playoff hole. He surrendered the advantage, and when Cope’s shot to the green on the 18th rolled to a halt around 10 feet from the hole the title looked to heading across the Irish Sea.
“Into the last he had a great shot in for a birdie attempt,” Mark said when he recalled the nerve testing finish. “I was thinking, gee I need to follow him.
“I obviously wasn’t thinking of holing the shot. I literally zoned in and tried to get the ball as close as I could to the flag,” he recalled when asked about what went through his mind when he addressed the ball.
“I was trying to apply pressure on him by getting my ball inside his. There was nothing else in my head but to get a perfect strike on the ball.
“Obviously it came off. It was unbelievable,” he enthused as he became the first player since Paul Dunne to win back-to-back Championships. He will be eligible to play in the Championship next year, and he has every intention of going for the hat trick.
Mark is a Transition Year student in Kilkenny CBS. Currently he is enjoying a rich vein of form and he helped Leinster to a win over Munster in the Interprovincial in Carlow on Monday.
The scouts have taken note, and he has received offers of scholarships from America and other quarters.
“That is a big decision,” Mark said. “I still have two years left at school so there is time to figure it out. Moving to America and starting a new life in college over there would be a big change.”
Of one thing he is sure, he would like to play golf professionally in the future.
“If you ask me what job I would like to do in the future I would like to play golf on the European Tour,” he said. “That would be hard. There are other smaller tours, maybe even the Challenge Tour to break onto the European Tour.
“I could see myself playing week in and week out. That would be amazing.”
Mark, who is coached by Kilkenny club professional, Jimmy Bolger, felt that because he had plenty of time to indulge his passion for golf this year that his game had improved. Next year it will be back to the studies, however.
He is something of a sporting handyman. He plays soccer with Evergreen, and last year he was part of the Kilkenny squad that won the under-16 inter-league title, beating Waterford in the final.
Mark is son of Eddie and Eileen Rose Power, who have won virtually every major amateur golf title on the Irish circuit.
“To win in that style was dream like stuff,” insisted proud dad Eddie, who was green side when Mark’s winning shot hit the turf. “He hit the perfect shot. It pitched perfectly and spun back into the hole. I dropped everything and jumped into the air.
“It was one of the proudest moments of my life,” he added.