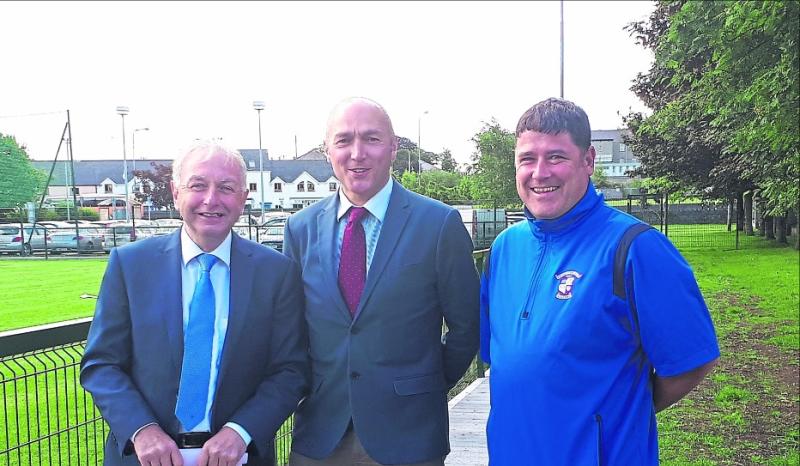 So far so good is the message from Kilkenny soccer club, Freebooters AFC, who are spearheading the Fair Green Development Project in the heart of the city.
A year ago the ambitious junior soccer outfit announced it was embarking on a grand €440,000 development that included the building of a community centre and astro turf pitch at the grounds they have on lease from the Local Authority, but the costs have since risen by €100,000.
“It seems like a lot of money, but in the lifespan of a club and a community that is not that huge,” insisted Development Chairman and local business man, Fran Grincell, who is a major driving force behind the project. “The overall project could take us five years or more, but we are determined to see it through.”
A year into the project Freebooters have 75% of the work on Phase 1 completed. The cost was €70,000, and the work was completed without incurring debt.
Developed were a 360 metre long, 1.5 metre wide footpath around the full perimeter of the playing pitch; an outside perimeter fence was erected; six metre high ball nets were erected behind both goals on the playing pitch, and an inside rail around the full pitch and skirting the new pathway was erected.
All the work was grant assisted from central funds, and last week Kilkenny County Council added to the good news when it revealed €2,100 had been allocated under the Local Community Development Committee (LCDC) grants scheme to help with the costs of erecting LED lighting on the new pathway.
“That money will be spent straight away,” smiled Mr Grincell as we walked along the impressive new pathway the club hopes will be used by local people as an exercise area.
Next phase
“Three years planning went into this before we started,” Mr Grincell explained.
Phase 2 of the project will commence before the end of the year. That will include a caged (netting roof) astro turf, fully lit pitch with car parking and machinery storage area.
“We are ready to go with that once the grant announcement come from the Sports Council,” the chairman revealed.
Phase 3 will be the big challenge as it involve a general purposes community centre, complete with new dressing-rooms.
“This facility is not to be a monument to Freebooters,” Mr Grincell insisted. “We want people to feel a part of it, and they can do so now by coming in and using the footpath. The gate at the Mary’s Day Care Centre is open 24/7.
“The ideal scenario would be if they are dropping their children to soccer they can use it. We intend putting in outdoor exercise machines, which will be used by people too.”
FAI Chief Executive, John Delaney, visited the club during the Festival of Football tour recently, and the ‘Association contributed €5,000 to the project and committed to assisting with the astro turf pitch development as well.
The FAI have also agreed to assist with a programme Freebooters are trying to get going in the Fair Green, which is a Groundskeeping and Coaching Programme in conjunction with the BTE group (Back to Education) and Leader Programme.
“This development and the club have to grow together,” said Mr Grincell, who is a coach with the Mini Tots group (from five upwards) at the club, which has an overall membership of close to 1,000.
“The project will be identified with the name of Freebooters, but what we will have is a community project,” he insisted.