Willie Duggan: The rule was you never showed fear or hurt 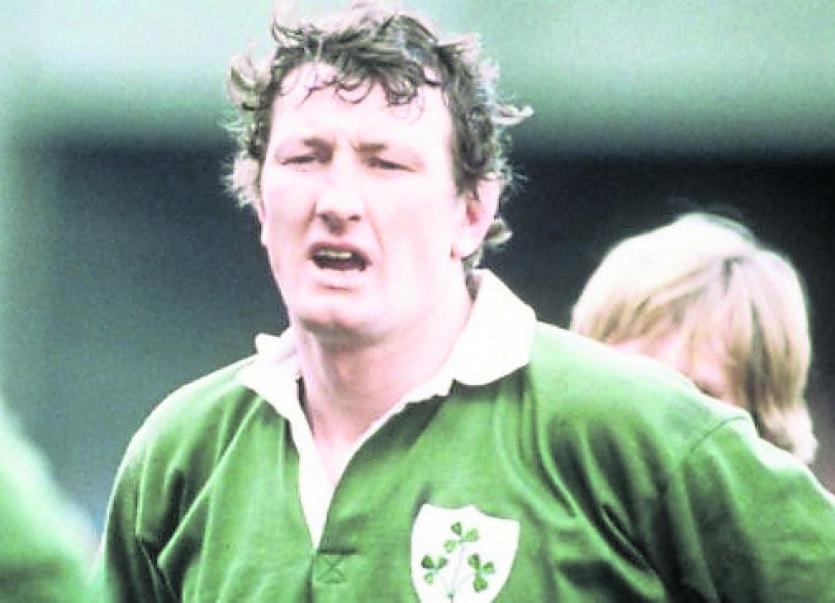 Willie Duggan who died this week

Willie Duggan once gave an insight into the psychology that determined his career. Never show a weakness. If an opponent hurt you, carry on.
Drag yourself on to the next play, or if need be, prompt a colleague to feign injury so assistance can be beckoned for both. The appearance of secondary treatment offered less to the enemy.
He lived his rugby life by that rule, a hard man, fearless, rugged but hugely talented; a man who admired the manly and had little time for the ‘Fancy Dans’.
Duggan, a proud son of Kilkenny and fierce admirer of achievers here, won acclaim the world over for his talent as a rugby player in the pre-professional era.
He was the most capped No. 8 in the world one time when Test matches were played with less frequency than they are today.
When he won his first cap in January 1975 it was a big story; front page news in the Kilkenny People. A Kilkenny man a senior rugby international. It wasn’t an every day, or year, or decade occurrence.
Then Mayor, Alderman Tommy Martin made his way into the Ireland dressing-room after the match against England in Lansdowne Road to offer his congratulations. Duggan didn’t understand the fuss, but deep down he appreciated the appreciation.
Forty caps later in 1984 he stepped off the international stage, a legend in the game, a hugely respected figure among his peers, a former British and Irish Lion who in 1977 sampled the delight of scoring a try in a Test match against New Zealand.
He captained Ireland during the season he departed, a Triple Crown success in 1982 part of his CV.
Willie Duggan was different things to different people. He could be this or that to different people, but to me there was a remarkable humility regarding his achievements and the attendant acclaim.
We first met as player and journalist for an interview sometime after that 1975 breakthrough.
It wasn’t simply a ‘meet and talk’ affair. The IRFU had to clear the interview.
The meeting was in Sean Byrne’s pub on James Green, a stone’s throw from Willie’s then home at the back of the Garda station.
He had come from a gym session. He supped a pint of milk from a glass bottle to down what appeared to be a slab of corned beef wrapped in bread.
That night he buried the myth. He didn’t like training, they said. Who really did, he wondered, but he put in the work, lots and lots of it.
You couldn’t survive at international level if you didn’t, he insisted.
Duggan didn’t only survive - he thrived, meeting and facing down the best and toughest rugby had to offer.
The heading remains etched in the memory: “Duggan and Bastiat and a ton of bodies”. Jean Pierre was a juggernaut, a 6’ 6”, 236lbs giant who won a Grand Slam with France in 1977. He too was a No. 8.
The ton of bodies was the possible mass in a ruck. The reference amused Duggan.
Willie and Bastiat rubbed shoulders, and more, during several ferocious France v Ireland matches. Fear? No! Respect? Yes!
Trusted colleagues will tell you Duggan was great to play alongside, but was a ferocious opponent, a warrior who was at his best when the battle was fiercest.
He played his club rugby with Blackrock and Kilkenny, and at inter-provincial level with Leinster.
He admitted to being a ‘spotter’ during such games. As the players ambled up to lineouts he would throw an eye over the crowd.
The practice served him well at least once when he was coasting in an inter-pro match, he smiled. He spotted an Irish selector in the crowd. Presto, a more business-like approach!
After retiring from the international game he played for a few seasons with Kilkenny. He helped the club in the league and Provincial Towns Cup, but although committed, he realised the inherent risks.
He wasn’t going to be a punch bag for might be tough guys around the junior game. He did his bit and moved on, later coaching with the club.
Over the years a friendship grew. Some years later I asked him to join the Selection Committee on the Hotel Kilkenny/Kilkenny People Sports Star of the month scheme.
Duggan’s appreciation of sporting talent shone through. He loved meeting the stars.
He admired them - ‘Ducksie’, the Downey twins, Paddy Mullins, Darren O’Neill et al. He served for around a decade.
Beyond that he and his wife, Ellen attended virtually every annual banquet. He loved to see Kilkenny people achieving. He liked it even more that they were recognised for doing so.
He played hurling and football with my own club, Dicksboro. He got to wear the black and amber at under-21 level.
We feared his might at training in the CBS grounds in James Street, and we gazed in wonder as he often finished a session by running the perimeter of the field carrying a player on his broad shoulders.
That was part of his preparations for rugby.
“Hey lad,” was an expression he was wont to use, and it prefaced an often made inquiry when he wondered “how will that team of ours do this year?” He was of and for Kilkenny!
Kilkenny bids adieu to a high achieving son this week. To Ellen and the family we extend our sympathy.
Willie Duggan was one of the good guys!