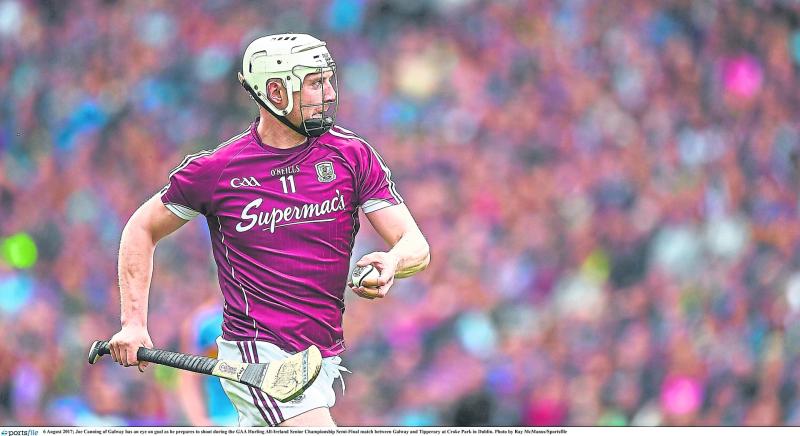 Joe Canning - he was wonderful on Galway's big day

Wonderful, free scoring Galway bridged the 29 year gap between their fourth and fifth senior hurling All-Ireland championship victories in spectacular fashion yesterday in a packed Croke Park (0-26 to 2-17).
The Tribesmen ran up another big score to beat Waterford in a gripping final that wasn't decided until the closing stages when Galway subs, Jason Flynn and Niall Burke came off the bench to contribute two points each to help tilt the balance in their team's favour.
Galway countered Waterford's much talked about sweeper system by playing wing back, Aidan Harte as a sweeper in front of their own full-back, Daithi Burke, but the contest was about much more than playing styles and systems as the Westerners gave another exhibition of point scoring.
The new champions were deadly on the trigger, and were never afraid to let fly from 50 or 60 metres. They opened by shooting four points in-a-row, one score being better than the other, as they threatened to bury Waterford early.
The Deise recovered and goals from Kevin Moran and Shane Bennett, who retired injured immediately after scoring, helped them cut the deficit to the minimum at half-time, 0-14 to 2-7.
Joe Canning, one of the players of this generation, was majestic as he blasted over nine points on the way to claiming his first senior medal, while midfielder, David Burke, also enjoyed a magnificent afternoon, shooting four points.
The introduction of Flynn and Burke injected new life and added an assassins touch to the attack as Galway simply went for it in the dying stages.
Gearóid McInerney, Conor Cooney and Harte were other top line performers in what was a day of days for Galway hurling. The victory completed the National League/Championship double for the Tribesmen, while their minors also won the All-Ireland, beating Cork in a classy decider.
The West is awake, most definitely! Galway are now the super power in hurling.
What a championship season is has been for Galway. On the road to claiming the Liam MacCarthy Cup they scored 2-28 (v Dublin), 0-33 (v Offaly), 0-29 (v Wexford), 0-22 (v Tipperary) and yesterday's 26 points. Some going!
What of Waterford's sweeper system game? They are good at executing the peculiar demands it presents, very good in fact. Neither they nor the system are going away any time soon.
Kilkenny have always had difficulties coping with the system, so come the 2018 season they can expect to be facing it again.