Kilkenny hurling: When Ned Quinn rang Brian Cody - the story behind the scenes 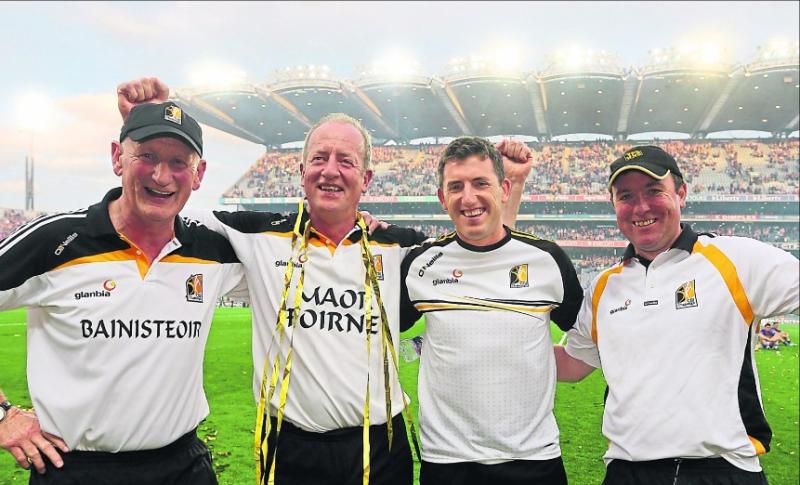 The worst-kept secret in hurling was made known last week as Brian Cody was reappointed as Kilkenny senior hurling manager.
Imagine what the conversation went like:
Brian: “So I’m back, I see from Aertel. Again.”
Ned: “Yes. I told you Lucy and Elsie would get everything sorted out between them while yourself and meself watched the camogie. Good job nobody realises how it’s the two of them, and not the two of us, who’ve been the people really running hurling in Kilkenny for the past 18 years. Ha ha!”
Brian: “Indeed. Mind you, I see they’re not too happy in Glenmore.”
Ned: “Ah, that’s just Eddie being Eddie. The day he doesn’t have something to say for himself is the day to be worried.”
Brian: “Hmm. Anyway, tell me, did anyone say anything at the County Board meeting?”
Ned: “Nobody. It went through on the nod as usual.”
Brian: “That’s good. I wondered if there might be a few murmurings after our, shall we say, difficulties this summer.”
Ned: “Nah, not a peep. I think they were secretly relieved. What if you’d said you’d had enough? What would happen then? Imagine the chaos. It’d be worse than trying to hire the next Garda commissioner!”
Brian: “True, I suppose.”
Ned: “I did – ahem – wonder if you might freshen up your backroom team, though…”
Brian: “C’mon, you hardly expected me to continue without Dempsey. At this stage he’s like my right arm. And my left arm, come to think of it.”
Ned: “But the other two lads?”
Brian: “Don’t tell anyone this but it was the other way around. The three of them said they’d give me another year.”
Ned: “Fair enough. But please tell me that the coaching will be a bit better. We’re still playing the same game. Get the ball and belt it straight down the field. You know the reason everyone talks about that point Tommy created for Henry in the 2011 All Ireland final? The crossfield ball? They talk about it because it was the only time in the past ten years Kilkenny didn’t hit the bloody thing straight down the field!”
Big Changes
Brian: “Look, I can only work with what you’re giving me. And yes, next year there will be big changes. Because there has to be. There’s five or six lads who’ve been sitting on the bench for the past couple of seasons and are not going to suddenly improve.”
Ned: “How about a couple of fellas from the intermediate team?”
Brian: “Oh, don’t worry. I’ve spoken to Anthony McCormack and got him to mark my card. He reckons one or two of them are worth a gamble. Only thing is, that’s a long-term project. It could take a couple of years to get them up to speed for intercounty senior hurling. Er, I do have a couple of years, don’t I..?”
Ned: “Don’t be silly.”
Brian: “Just to warn you, then. I have to revamp the team and I have to revamp the panel. You know what they may mean for the National League?”
Ned: “Please don’t say what I think you’re going to say.”
Brian: “Yes. We’re going to be fighting for our lives from the start. We may even end up being relegated.”
Ned: “Relegated? Oh God. Barry Hickey will have a fit. Think of all those big gates we’ll miss out on in 2019 if we’re in Division 1B.
Brian: “Look, we’ll cross that bridge when we come to it. I once played on a Kilkenny team that was in Division 2 – and won the All Ireland the same year.”
Ned: “I remember. Just as long as we’re not having this conversation again in 12 months’ time… By the way, I’ve looked through Jackie’s book and he says something about how you’re not great at giving feedback to the players. Is that going to change next year?”
Brian: “Sorry, Ned, can’t hear you. I think there’s something wrong with the phone.”
Ned (speaking up): “JACKIE RECKONS YOU NEED TO COMMUNICATE BETTER WITH THE PLAYERS.”
Brian: “CAN’T HEAR A WORD YOU’RE SAYING, NED. DEFINITELY SOMETHING UP WITH THE PHONE. I’LL TALK TO YOU TOMORROW. BYE!”