Handball: it was a busy time for Kilkenny players 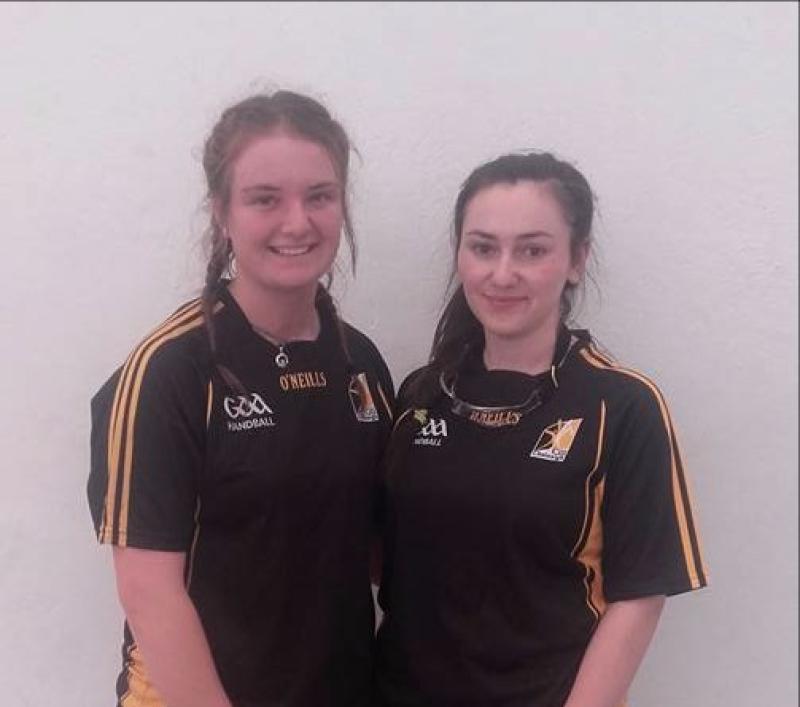 Kilkenny handballers had a busy weekend with players competing for titles and places in All-Ireland finals at various venues around the country.
On Saturday the ladies Open doubles final was played at Croke Park, and on Sunday the attention switched to the adult All-Ireland semi-finals between the Leinster and Connacht champions.
Ladies doubles
On Saturday at Croke Park, Kilkenny’s Ciara Mahon and Aoife Holden made history by becoming the first ladies from the county to compete in the All-Ireland Open doubles final.
Facing them were dynamic Cork duo, Catriona Casey and Aishling O’Keeffe, who were aiming to complete five wins in-a-row.
The Clogh/Kilfane pair competed strongly, but the experience and skill of the Munster ladies was the deciding factor as they were victorious in two sets, 21-8, 21-9.
Considering this was the first time for Ciara and Aoife to experience this level of handball in doubles competition, it was very much a learning experience for them which will, hopefully, drive them on to further success in the near future.
In the All-Ireland adult semi-final matches between Leinster and Connacht there was victory for Kilkenny in two of the three ties contested.
In ladies minor doubles the Kilfane/Clogh pair of Dearbhail O’Keeffe and Sorcha Delaney scored a comprehensive 21-6, 21-6 win over Sligo. They now play Clare in the final in two weeks time.
There was also victory in Emerald Masters A doubles, where Philly Parsons (O’Loughlin’s) and Johnny Brennan (Mothel) scored a comfortable 21-10, 21-7 win over Mayo. They face Limerick in the decider.
In intermediate doubles, Kells brothers Patrick and Peter Funchion were defeated by Galway in two games, 21-16, 21-15.
Kilkenny also received a bye to the All-Ireland final in two grades, under-21 doubles and ladies intermediate doubles.
Juveniles
Meanwhile, on the juvenile front the focus this weekend will be on the All-Ireland semi-finals between Leinster and Connacht.
On Sunday, Kilkenny contest six matches at St Coman’s, Roscommon, with the winners facing either Munster or Ulster in the final.
Representing Kilkenny in the boys events are Billy Drennan (Galmoy) in under-14 singles; Eoin O’Brien (Windgap) in under-15 singles and Jack Holden (Kilfane) in under-16 singles, and in girls competitions, Amy Brennan (Clogh) plays in under-14 singles, the Windgap duo of Sontae Jackson and Aine Duggan play in under-14 doubles and in under-16 doubles, Kilkenny will be represented by Noelle Dowling (Mothel) and Roisin O’Keeffe (Kilfane).
Fixtures
All-Ireland juvenile semi-finalson Sunday at St Coman’s, Roscommon (11am) - boys under-14 S, Galway (Mikey Kelly) v Kilkenny (Billy Drennan); girls under-14 S, Galway (Sadhbh Ní Fhlaithearta) v Kilkenny (Amy Brennan); boys under-15 S, Roscommon (Liam Egan) v Kilkenny (Eoin O’Brien); boys under-16 S, Roscommon (Magomed Yakhyaev) v Kilkenny (Jack Holden); girls under-14 D, Mayo (Hazel Finn/Lucy Brennan) v Kilkenny (Sontae Jackson/Aine Duggan); girls under-16 D, Mayo (Cuilleann Bourke/Claire Reynolds) v Kilkenny (Noelle Dowling/Roisin O’Keeffe).