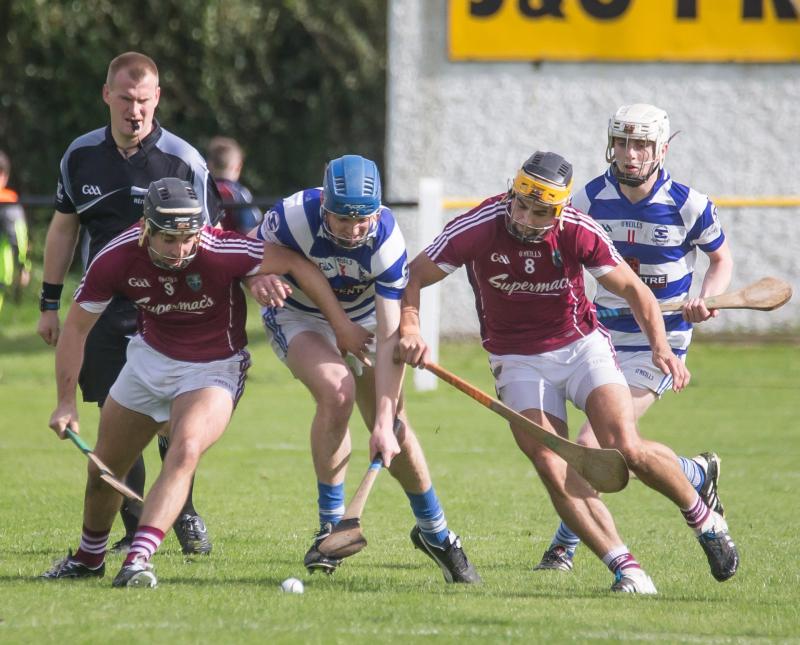 Kevin Kelly (9) was the star man for St Patrick's

Kilkenny star, Kevin Kelly, scored a hard to credit 3-11 as he inspired St Patrick's (Ballyragget) to a thrilling win over beaten league finalists, Tullaroan in the second intermediate hurling semi-final in Nowlan Park today.
Kelly was on fire from the start. He grabbed 2-1 from play and didn't miss a free all afternoon. His third goal was from a penalty.
After an early exchange of points between Kelly and John Walton, the winners hit the front in the fourth minute when Brian 'Brook' Phelan pounced for a goal. Kelly added a second in the sixth minute with a cracking drive to take his side 2-1 to 0-2 in front.
Tullaroan chased hard all the way, and with some fine free taking by Shane Walsh and scores from open play by Padraig Walsh and John Walton they succeeded in passing the opposition when the same Walsh goaled in the 15th minute (1-7 to 2-2).
St Pat's thundered back, and another goal from Kelly in the 25th minute shot them in front. They drove on into a half-time lead of 3-9 to 1-12.
When Kelly got his next goal from a penalty in the 45th minute he extended St Patrick's lead to what appeared a comfortable 4-14 to 1-14.
Tullaroan didn't give up. A 51st minute goal from Peter Walsh revived them (4-15 to 2-16) and although they had a penalty saved later, they still got the arrears back to the minimum virtually on the hour.
But a foul on that man Kelly earned St Pat's a point then, while there was still time left, there wasn't enough for Tullaroan to save the day.