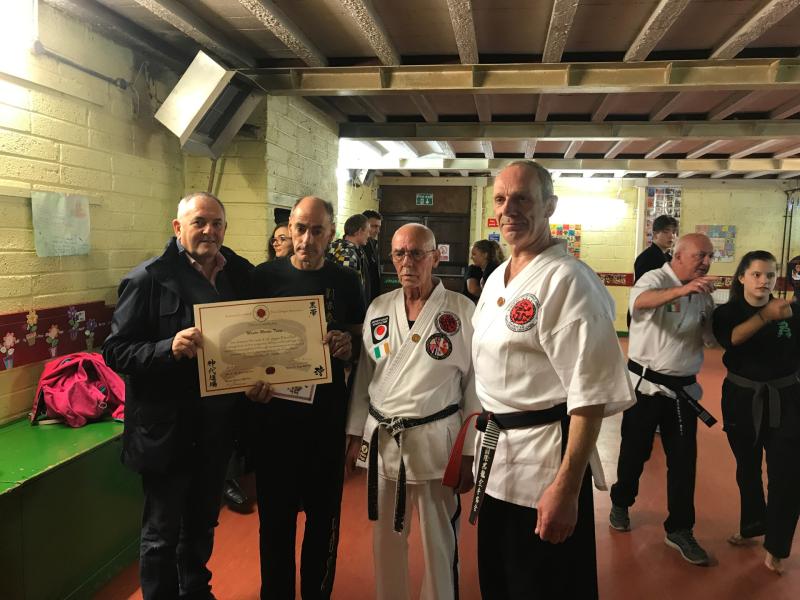 A determined Kilkenny City man who has given a lifetime of service to his chosen sport has attained the status of being one of the most senior Martial Arts Masters in Ireland.
Martin Treacy has been involved in the sport for over 40 years.
Recently, after a lifetime involvement in Martial Arts, he finally earned his reward when he was granted a Master Rank and Seventh Degree black belt.
The presentation was made at a Grandmasters seminar in Kilkenny.
Presentation
The presentation was made by Senior Grand Master John C. McGrane, 10th Degree black belt and Chief Technical Advisor to the World All Styles Combat Association and fellow Kilkenny man, Senior Grand Master Tom Foley, 10th Degree black belt.
John McGuinness TD, honorary President to the Kilkenny Association, was on hand to offer his congratulations to the newest member of what is an exclusive club in Ireland.
Martin Treacy has been studying Lau Gar Kung Fu and kick boxing for close on 40 years.
His first venture into the Arts was to practise with three men who came to Ireland from the UK to start a Kung Fu club here.
They were Steve Babbs, Frank Lynch and Gass Drew, all of whom were Junior Masters at the time and all were European champions.
Later they stood down and their place was taken by Denis Davis, who was the Chief Instructor for Lau Gar Kung Fu for decades.
As time moved on Irish people took over as instructors and formed their own clubs.
One of them was Martin Tracy, who is now Chief Instructor in the Kilkenny branch.
Experience
Mr Tracy travelled to the UK and all over the country to train with the Chief Instructor of Lau Gar Kung Fu Worldwide Master Jeremy Yau and others to gain valuable skills that helped him gain the status he has now attained.
From competing in tournaments, both at home and abroad, and winning several national and international titles Mr Treacy has rubbed shoulders with numerous great instructors from other Martial Arts, all of which helped broaden his range of skills.