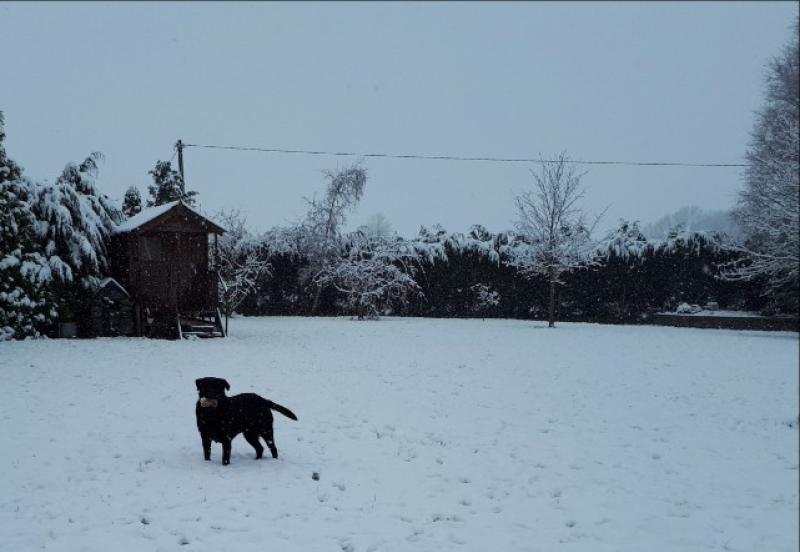 Too cold to play, but this dog Bono is having fun in the deep snow

Beauty replaced action today when sport in Kilkenny was obliterated by the heavy over night fall of snow.
While the playing fields of the county looked beautiful covered in a blanked of snow, all outdoor games were cancelled.
The GAA, soccer, rugby and other programmes all took a big hit, but after what has been a generally trouble free run so far this year in terms of weather schedules may be able to be recovered quickly.
The GAA have confirmed that all matches fixed for today (Sunday) will be put back to next weekend.
These include the J.J. Kavanagh under-21 Roinn A hurling championship final between James Stephens and Ballyhale Shamrocks which was fixed for Nowlan Park; the Kilkenny Citroen Centre minor 'B' football championship semi-finals scheduled for Piltown between Piltown and Mooncoin and the Pairc na Ratha clash between Glenmore and the Rower Inistioge, plus the J.J. Kavanagh North under-21 Roinn B hurling championship final between Clara and St Martin's (Muckalee), which was due to be played in Freshford.
Kilkenny rugby club were to be doubly engaged against Longford at 1sts and 2nds level in the Leinster Leagues, but these matches have been put back to next Sunday.
Kilkenny 1sts were really looking forward to resuming action after thumping Coolmine 73-7 last weekend when running in 11 tries. The Cats form is improving, and training is going well as they chase honours in the J1 League.
Meanwhile, it has been confirmed that the South East League final will be played in Foulkstown, Kilkenny on Sunday, December 30.

Kilkenny are the current holders, having received a walk over form Wicklow in the decider last season.
The last time the Foulkstown club won the title on the field of play was in 2006. They face Enniscorthy in the decider this time.