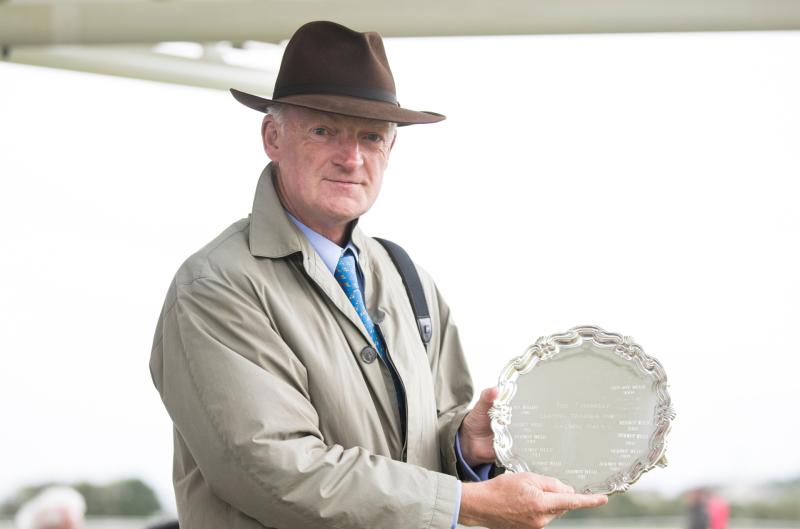 Mullins has won the Grade 2 contest in four of the last five years and impressive Punchestown maiden hurdle winner Getabird is likely to return to Punchestown this Saturday. Mullins has also included the highly regarded Carter McKay and Listowel Festival winner Makitorix.

"I would think that Getabird will go to Punchestown on Saturday and Carter McKay just had a little setback that forced him to miss Naas," said Mullins. "If we are happy with him this week I’d say he’ll go there as well and we’ve also entered Makitorix in the race and there’s a good chance we will run him also.

"Getabird won his maiden hurdle at Punchestown and is in good form and handles the track," he added. "The ground won’t be an issue with him and we were very happy with Carter McKay’s performance at Gowran Park when he won his maiden hurdle. This race comes at a good time for these sort of horses."

Joseph O’Brien has entered Leopardstown Festival winner Hardback  for owners Gigginstown House Stud who could also be represented by the Gordon Elliott trained Grade 1 winner Mengli Khan, while Henry de Bromhead’s vastly improving High School Days is another inclusion that promises to make it a memorable renewal of the Grade 2 contest.

"This year's renewal of the Sky Bet Moscow Flyer looks high class once again," said Michael Shinners, Sky Bet Racing PR Manager. "The picture for the Supreme still looks cloudy and an impressive winner on Saturday could well propel them up near the front of the market."

The first renewal of the Grade 3 Total Event Rental Kildare Novice Chase at the home of Irish jump racing has attracted a 14 strong entry with recent Grade 1 winner Shattered Love a notable inclusion for Gordon Elliott. Gigginstown House Stud and Elliott have also made entries for Dinaria Des Obeaux, Dounikos, Mossbank and Tombstone, while Elliott may also rely on Jury Duty and The Storyteller.

Impressive Navan winner Invitation Only may represent Willie Mullins in the valuable 2m4f contest, while the champion trainer has also got Abre De Vie and Koshari in the race.

Also on Saturday’s card is the prestigious Red Mills Amateur National and the first of a seven-race card is due off at 12.25pm.

"We are looking forward to kicking off the 2018 racing year here at Punchestown with some very decent quality of racing," said Richie Galway, Punchestown Racing Manager. "The going at time of entry was soft to heavy with an unsettled and cold forecast for the coming days."