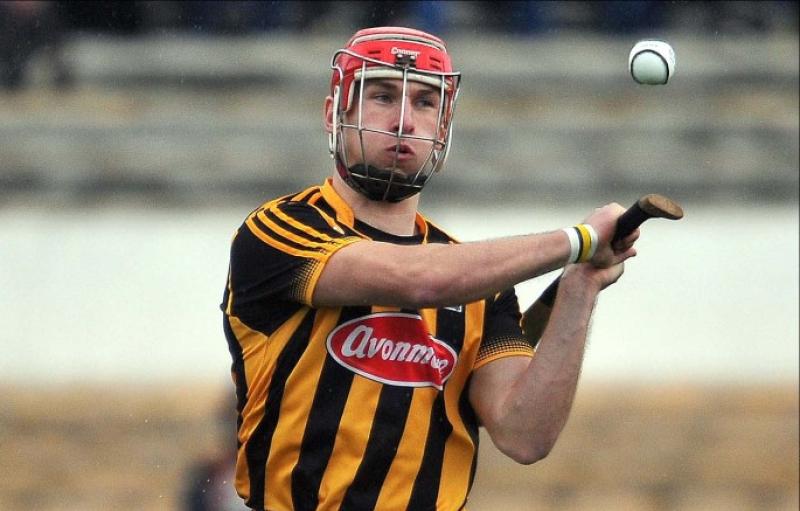 Team captain Cillian Buckley was the star man for Kilkenny

Kilkenny turned in a strong enough second half to score a laboured win over Offaly in the Walsh Cup senior hurling semi-final in Tullamore today.
In the end points from free taker, Alan Murphy, in the 62nd and 69th minutes sealed victory for the Cats who now have a home final against the winners of the Dublin and Wexford semi-final which will be played tomorrow.
Offaly were on top for most of the opening half, but a one point lead at the break didn't reflect their hurling. Within a minute of the restart Kilkenny drew level with a score from Richie Reid, and there were times when they looked like they would push on and score a good victory.
The first time Kilkenny hit the front was in the 39th minute following a point from Richie Leahy.
On two occasions there was promise that Kilkenny would drive on. This was the case in the 59th minute after a four point run, the last from John Donnelly, extended their lead to 1-18 to 2-11.
However, the defence was prone to concede goals. When Offaly nabbed their third goal through Shane Kinsella on 61 minute the divide was down to the minimum.
Murphy's late points then made the game safe for the Cats.
Offaly opened with two points from Thomas Geraghty and a long free from goalie, Eoin Cahill and those scores set the tone for the half as they led all the way. After they put three scores together per Shane Kinsella, Geraghty and Liam Langton passing the 21st minute they were motoring, and that was reflected by their lead of 1-8 to 0-5.
A Kilkenny point from Bill Sheehan was needed to halt hard working Offaly's charge. Richie Leahy added to the Kilkenny gains before the Cats got a lucky call on a free in mdifield that could have been given the other way. When the ball was delivered in by Alan Murphy, it was scrambled to the net by Ger Malone from the right edge of the square.
Kilkenny were back in the game (1-8 to 1-7). They kept things tight from there, and at half time the gap was a mere 1-10 to 1-9 with Offaly in front.
SCORERS: Kilkenny - Alan Murphy (0-7); Richie Reid (0-5); Ger Malone (1-0); Richie Leahy (0-3); John Donnelly (0-2); Bill Sheehan, John Walsh, Conor Martin (0-1 each). Offaly - Shane Kinsella (1-3); Shane Dooley (1-1); Conor Martin (1-0); Eoin Cahill (0-3); Thomas Geraghty (0-2); Oisin Kelly, Liam Langton (0-1 each).
Kilkenny - Eoin Murphy; Joey Holden, Robert Lennon, Paddy Deegan; Conor Fogarty, Cillian Buckley, Padraig Walsh; Conor O'Shea, Ger Malone; John Donnelly, Richie Reid, Richie Leahy; Bill Sheehan, Alan Murphy, John Walsh. Subs - Enda Morrissey for G Malone; Conor Martin for J. Walsh; Conor Delaney for R. Lennon; Pat Lyng for R. Leahy; Martin Keoghan for B. Sheehan.
Offaly - Eoin Cahill; Thomas Spain, Pat Camon, Ben Conneely; Patrick Delaney, Dermot Shortt, Jordan Quinn; David King, Thomas Geraghty; Oisin Kelly, Shane Kinsella, Colin Egan; Colm Gath, Conor Maher, Liam Langton. Subs - Shane Dooley for C. Egan; Dan Doughan for D. Shortt; Ciaran Cleary for C. Gath; Conor Molloy for T. Geraghty.