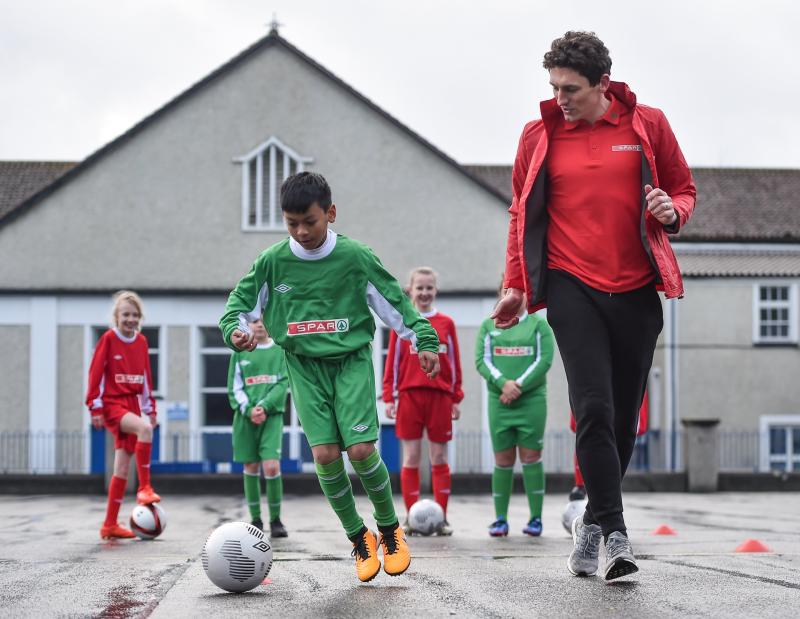 The call has gone out to Kilkenny primary schools to kick their sporting year into action!

The five-a-side school blitzes are open to boys and girls from fourth, fifth and sixth class, and puts emphasis on fun and inclusivity. SPAR and the FAI are encouraging Kilkenny schools to sign up as they look to surpass 2017 participation figures, which saw 1,495 schools and 28,576 children lace up their boots to take to pitches around the country.

Registration for the programme will close on February 9, with county blitzes kicking off at the end of February. Winning schools progress from county level to regional then provincial finals, with the lucky few making it all the way to the National Finals, which will be held on the hallowed turf of Aviva Stadium on May 30.

The SPAR FAI Primary School 5s Programme is an initiative organised by the Football Association of Ireland Schools (FAI Schools). SPAR’s support of the competition has been in place since 2015, and has seen participation figures grow year on year to become the largest primary school’s competition in the country.

The number of schools signing up for the participation programme has jumped from 1,064 in 2015 to 1,495 last year, benefitting thousands more children in the form of encouraging a healthy and active lifestyle. Particularly pleasing for SPAR has been the increase in the number of girls giving it a go, 40% of participants are now female and SPAR, as well as ROI Women’s International Megan Campbell, are eager to see this number rise.

"SPAR is very proud to be involved with this programme for the fourth year, which, thanks to sustained growth, now gives almost 29,000 boys and girls nationwide the opportunity to represent their school and county in a national level competition," said Colin Donnelly, SPAR Sales Director. "We are continually inspired by the enthusiasm and passion shown by students and teachers taking part in the programme which is helping to drive the programme to new levels."

"We have 400 high quality, conveniently located outlets spread across the country who are equally as enthusiastic about this programme, which allows us to give back to our loyal customers and help support schools and communities in Kilkenny and across the country."

"The competition has gone from strength to strength thanks to the assistance of our sponsors, SPAR," said Seán Carr, FAI Schools Chairman. "The nationwide spread of schools who are choosing to take part, and the increase in female participation, which now stands at 11,384 students is particularly pleasing. I would encourage all primary schools to sign up, and experience the positive benefits of the programme first hand."

Schools can register for the SPAR FAI Primary School 5s Programme by logging on to www.fai.ie/primary5. The closing date is February 9.